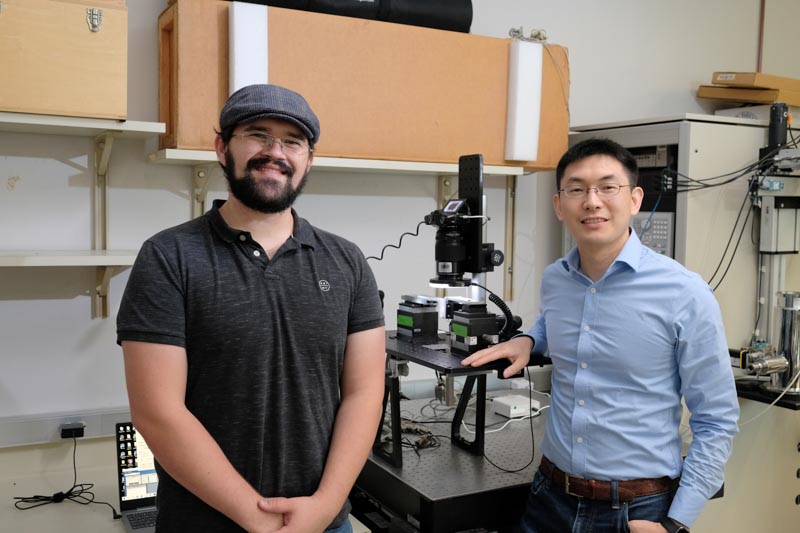 SMART stands for (Shear Motion Assisted Robust Transfer), a technique developed by Galuska and scientists at the University of Windsor and Oak Ridge National Laboratory (ORNL). The innovative technique is designed to test the mechanical properties of ultra-thin polymer films.

A native of Houston, Texas, Galuska says the recognition by Nature Communications is both exhilarating and gratifying.

“I am ecstatic that the work has been published. Even though this is a prestigious journal, the fact that it is open access is more important to me,” said Galuska. “This means that scientists across the world can see this research without having to pay, allowing the technique to become mainstream, improved upon and used as the standard for testing these types of ultra-thin polymer films.”

Galuska points out that the fundamental significance of the research is that the team developed a relatively simple method to directly study the mechanical response of ultra-thin polymers.

“Not only does this enable scientists to better understand the materials that they are working with, but this subsequently aids in the development of new materials for applications in optical coatings, membrane filtration and organic electronics,” said Galuska.

Neutron reflectometry at ORNL’s world-class Spallation Neutron Source was used to understand the effect of water infusion on thin-film mechanics. These tests were conducted in collaboration with Drs. Minh Phan and John Ankner. Gravimetric and viscoelastic measurements of thin polymer films under controlled atmosphere were done at the ORNL Center for Nanophase Materials Science, in collaboration with Drs. Ilia Ivanov and Eric Muckley. Dr. Wim Bras, Distinguished Scientist Polymer Research in the Chemical Sciences Division at ORNL facilitated the collaborative opportunity.

Gu notes that SMART holds the world record for analyzing the tensile mechanics of free-standing polymers as thin as 19 nanometers. To put that into perspective, a human hair is roughly 80,000 nanometers thick, or 0.08 mm. Consequently, the SMART technique can be used to test polymer films that are 4,000 times thinner than a single hair.

Gu has effusive praise for his graduate researcher, commending Galuska for his “dictation, intelligence and wry sense of humor.” Gu lauds Galuska for building a multidisciplinary collaboration with other researchers in the United States and around the world.

“I think that the publication of his work in Nature Communications is a great testimony to his research capability,” said Gu. “I can see a bright future for this young researcher. What make me especially happy is to see my students become more successful than when I was in graduate school.”

The group’s work is funded by the Department of Energy, Basic Energy Science. To read the paper, visit: https://www.nature.com/articles/s41467-021-22473-w