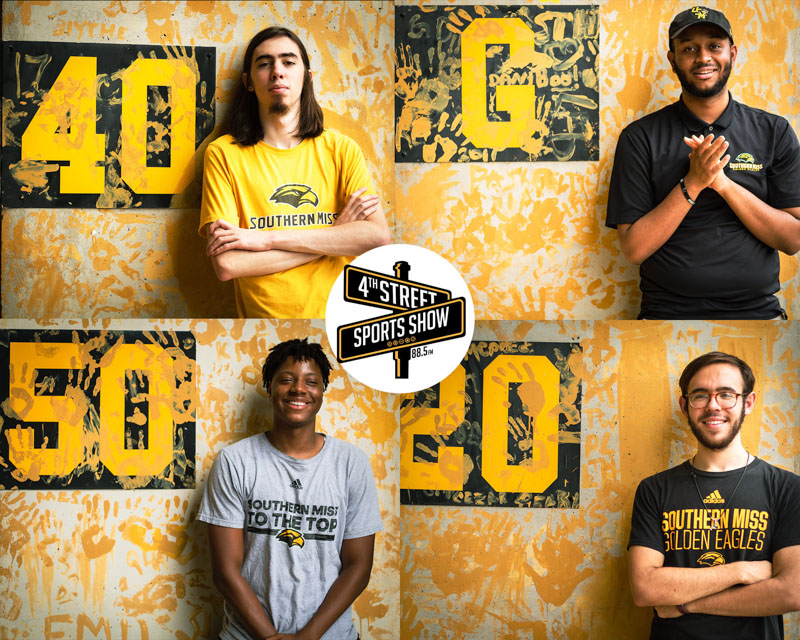 Students in the School of Communication at The University of Southern Mississippi (USM) have launched a podcast and radio show titled, “4th Street Sports Show.” Interested in bringing an inside look at Southern Miss Athletics and its athletes, hosts Austin Lindsey, Charlie Luttrell, Koby Moore and Charles Arnold have entertaining conversations and bring the local Hattiesburg community into the discussion as they make predictions about the season.

Lindsey, a Junior Media and Entertainment Arts major from Jackson, Miss., is in his first year of reporting as a sportswriter for the Student Printz and hosting the Sports Recap on SMTV. He has also spent the last year on the university’s radio station as a radio personality (a.k.a. Smooth Aust), hosting and being featured on numerous shows.

“The show has received great feedback from the USM community,” said Lindsey. “In hosting the show, I’ve learned unique ways to reach an audience and how to be confident in the way I communicate — whether I’m connecting to players in the locker room or interviewing coaches, it’s important to ask good questions that provide context to our content.”

The show opener featured Director of Athletics Jeremy McClain, who discussed his vision for this academic year. Since its launch, the show has also featured soccer Head Coach, Mohammed El-Zare, and volleyball Head Coach, Stephanie Radeck, and up-and-coming student-athletes. In the latest episode, the owner of the Gulf Coast Monarchy, Tyre Brown, was in the studio to talk about the Women's Football Alliance team.

“Students have a great opportunity with ‘4th Street Sports,’ as well as other student produced shows, to get practical experience in the professional side of media,” said Dr. Wilbur Martin, General Manager of WUSM.

“In addition to great content creation for our media outlets, listeners can get valuable information about the sports programs at USM,” Martin added.

Episodes are released on Tuesdays at 5 p.m. and can be heard on Spotify and other podcast-streaming platforms. They can also be found on social media channels including Facebook, Instagram and Twitter.