Fenton to be Honored with Champion of Change Award 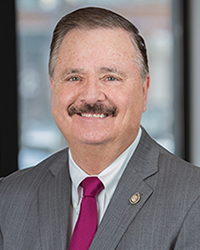 Richard Fenton, CSSP, Ilitch Holdings, Inc.’s Vice President and Chief Security Officer, will be recognized as a Champion of Change during the 2022 National Sports Safety and Security Conference & Exhibition in Orlando on June 28-30. The event is presented annually by the National Center for Spectator Sports Safety and Security (NCS4) at The University of Southern Mississippi (USM).

Fenton will receive the Champion of Change Award, which recognizes an individual who has demonstrated their ability and commitment to bring about positive change in the sports safety and security industry. Through progressive leadership, this individual’s achievements have made a difference in organizational effectiveness and led the organization forward into the future.

“It’s been an honor to serve in a public safety environment for more than 50 years,” said Fenton. “I’m blessed to work with an amazing group of security professionals and for an organization that has always made the safety and security of our guests and colleagues our highest priority.”

“Rick is a true champion of change, always on the edge of new practices and technologies and encouraging industry professionals and organizations to pursue excellence. He believes in continuous improvement and helping move his profession to the next level,” said Dr. Stacey A. Hall, NCS4 Executive Director and Professor of Sport Management. “Rick was one of the first recipients of the Certified Sport Security Professional (CSSP) designation and has been a long-time supporter and contributor to the NCS4. He currently serves as the Co-Chair of the National Advisory Board, and his leadership has advanced the board’s work and role in shaping the sports security profession.”

Richard Fenton retired as the Executive Commander of the Wayne County Sheriff Department in May 2000 after more than 27 years of service. While there, Fenton served as the agency’s Chief of Detectives and was assigned to a number of investigative task force groups, including the Wayne County Organized Crime Task Force, DEA Airport Task Force, and Airport Special Investigative Detail. Fenton served as Police Chief/Commander at Detroit Metro and Willow Run Airports for seven years.

In addition to his lengthy law enforcement career, Fenton was part of the adjunct faculty at Eastern Michigan University for 18 years, teaching in the Interdisciplinary Technology Department and School of Police Staff and Command. Additionally, he’s been a guest instructor at the Northwestern University Traffic Institute/School of Police Staff and Command and the FBI National Academy.

In June 2000, Fenton joined the staff of Ilitch Holdings as the Senior Director for Corporate Security, Safety, and Investigations, where he was later promoted to Vice President of Corporate Security in 2005 and achieved the title of Chief Security Officer in 2018. Fenton oversees and directs all corporate security functions, venue security and safety, corporate loss prevention, investigations, and executive services across all the Ilitch Companies. During his tenure, Fenton chaired the Public Safety/Private Security Planning Committees for the Major League Baseball All-Star Game, the NFL Superbowl/SBXL, and the Transportation Planning Committee for the NCAA Final Four.

Fenton is the co-founder of the innovative Detroit Public Safety/Private Security Partnership’s Lighthouse Program, a multifaceted program developed to enhance the safety and security of Detroit’s Central Business District for guests, patrons, employees, and residents.

In 2009, Ilitch Holdings and Fenton were honored by the Governor for Fenton's ongoing work and critical contributions to securing the Homeland in the State of Michigan. Fenton was appointed to the State of Michigan Fusion Center Advisory Board (MIOC) in 2010, and he continues to be on the board today. The Detroit Southeastern Michigan Intelligence Information Center (DSEMIIC) was formed in 2011; Fenton was elected to serve as the Chair of the Advisory Board and presently continues to serve as a member.

The National Hockey League and The University of Southern Mississippi NCS4 program selected Richard Fenton/Ilitch Holdings/Little Caesars Arena (LCA) for the 2019 Facility Achievement Award, noting that the LCA and the Detroit Red Wings were the model security group. In 2013, NCS4 and Major League Baseball selected Richard Fenton/Ilitch Holdings/Comerica Park for Professional of the Year, recognizing him as an outstanding leader in addressing safety/security. In 2014, NCS4 selected Fenton as the Distinguished Leadership Award recipient. He is the co-chair of the NCS4 National Advisory Committee.

Fenton led the Ilitch Group of Companies in receiving SAFETY Act Certification and Designation for the Security Program at Comerica Park, home of the Detroit Tigers, and Little Caesars Arena, home of the Detroit Red Wings (first arena in the U.S.). Further, both the past home (Joe Louis Arena) and current home (Little Caesars Arena) for the Detroit Red Wings were awarded the Sports Event Security Aware (SESA) Designation making it the first joint-arena / professional sports organization to receive this honor.

Fenton is a graduate of the FBI National Academy (NA) and the Northwestern University School of Police Staff and Command (SPSC), where he has lectured and taught classes. Fenton graduated from Wayne State University in 1974 with a Bachelor of Science Degree and earned his Master of Arts degree from Eastern Michigan University in 1978. Fenton continued academic work toward a Doctorate earning graduate credits at the University of Virginia and the University of Detroit. He is a Certified Sport Security Professional (CSSP).