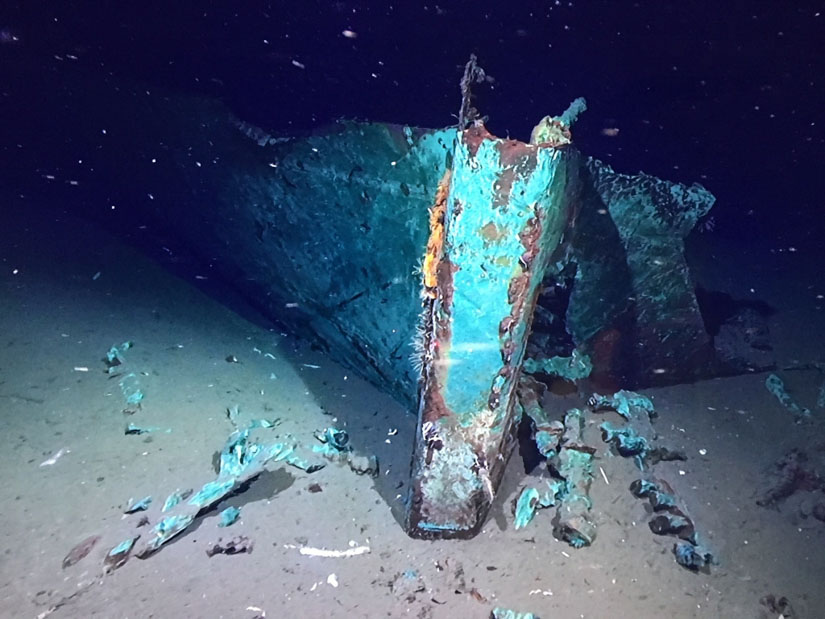 One of the shipwrecks investigated at 1800m deep. Image: Leila Hamdan.

Historic wooden shipwrecks alter seafloor microbial communities, reports a recent study. There are millions of shipwrecks in the world’s oceans, each providing a potentially new habitat for sea life. Microbes form the foundation of ecosystems and this is the first evidence of how human structures impact their distribution in the deep sea.

Wooden shipwrecks provide microbial habitats similar to naturally occurring geological seabed structures, reports a new study in Frontiers in Marine Science. Wood fall and other hard surfaces are often islands of deep-sea life, but little is known about the microbial diversity of human-made habitats also found on the seafloor. Microbes are at the base of ocean food chains, and this is among the first research to show the impact of human activities--like shipwrecks--on these environments.

“Microbial communities are important to be aware of and understand because they provide early and clear evidence of how human activities change life in the ocean,” said corresponding author Dr Leila Hamdan of the University of Southern Mississippi.

“Ocean scientists have known that natural hard habitats, some of which have been present for hundreds to thousands of years shape the biodiversity of life on the seafloor. This work is the first to show that built habitats (places or things made or modified by humans) impact the films of microbes (biofilms) coating these surfaces as well. These biofilms are ultimately what enable hard habitats to transform into islands of biodiversity.”

UNESCO estimates that there are as many as three million shipwrecks around the world, most of which are made of wood. As an initial study of the microbial life around such sites, Hamdan and her collaborators chose two wooden sailing ships that sank in the Gulf of Mexico in the late 19th century.

To collect samples of biofilms, the team placed pieces of pine and oak at varied distances between zero and 200 meters from the shipwreck. After four months, they retrieved these samples and measured all of the bacteria, archaea and fungi using gene sequencing.

The results showed that the type of wood had the greatest impact on bacterial diversity (oak was more favorable than pine), although this was less influential for archaea and fungi. Microbial diversity also varied depending on the proximity to the wreck site.

But surprisingly, samples taken closest to the shipwrecks themselves did not show the most diversity--instead, this peaked at about 125 meters from the wreck sites.

Overall, the presence of these shipwrecks increased microbial richness in the surrounding area and altered biofilm composition and dispersal. Consistent with previous research, the distribution of biofilms also depended on environmental factors such as the depth of the water and proximity to a nutrient source like the Mississippi River delta.

Although this current study focuses on wooden structures, the authors note that there are thousands of oil and gas platforms and oil pipelines in the Gulf of Mexico alone, and many more worldwide. Further research is needed to better understand the impact of these structures as well.

“While we are aware human impacts on the seabed are increasing through the multiple economic uses, scientific discovery is not keeping pace with how this shapes the biology and chemistry of natural under sea landscapes,” said Hamdan. “We hope this work will begin a dialogue that leads to research on how built habitats are already changing the deep sea.”