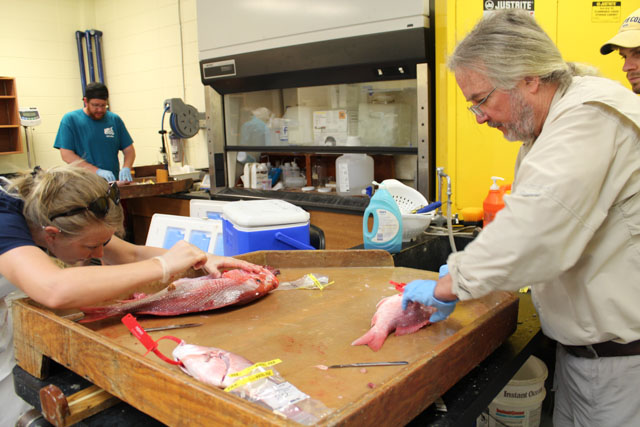 Researchers at The University of Southern Mississippi (USM) recently completed a large-scale collaborative project with the Mississippi Department of Marine Resources (MDMR) on reef fish in Mississippi, to gain understanding of changes to Red Snapper populations in the Gulf of Mexico. The five-year project, funded through the National Fish and Wildlife Foundation’s Gulf Environmental Benefit Fund studied reef fish on artificial reefs in Mississippi’s offshore waters and captured dynamics in the Red Snapper fishery. Information on catch rates, age and growth, reproduction, diet, trophic stage, habitat association, and water parameters were collected and can now be used towards developing estimates of season harvest and length. Such information is critical to understanding of annual changes in the fishery.

Monthly vertical longline sampling from 2016 through 2020 occurred at artificial reef sites (fish havens and rigs to reefs sites) in waters offshore of Mississippi up to approximately 300 ft deep. Red Snapper were caught at a higher numbers at rigs to reef sites, and the size of Red Snapper was larger when larger hook sizes were used in deeper waters. Most fish caught were between 2- and 3-years-old, with the oldest at 22 years old. Both male and female Snapper were found to grow rapidly until about age 8-10 years. Information on Red Snapper spawning frequency was also obtained, with frequent spawning events occurring across an ~179-day spawning season. The diet of Red Snapper was found to consist of larval mantis shrimp, swimming crabs, and penaeid shrimp. 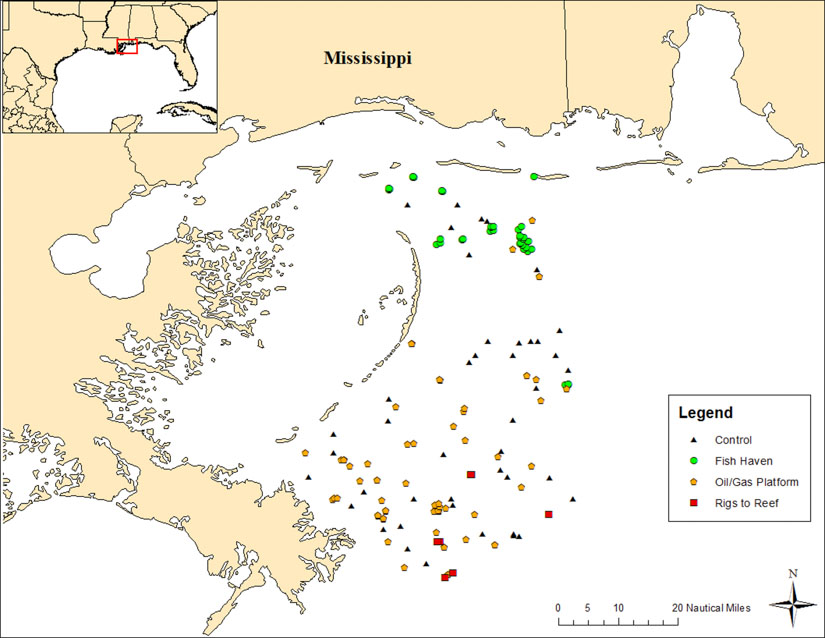 This project also included development and management of the MDMR Tails n’ Scales (TNS) reporting system, required for use by all private and for-hire recreational fishing vessels to enable reporting on Red Snapper landings in Mississippi. The TNS electronic reporting system is used in all harvest areas, including federal waters, Mississippi state waters, and adjacent states’ waters. For the TNS system, one angler per vessel per trip is required to use the TNS system when targeting or harvesting Red Snapper. Reporting compliance to the TNS program in the first five was estimated at 93 percent for the private recreational sector. This kind of monitoring for has allowed Mississippi anglers maximum opportunity and flexibility to access the fishery. The study also shows natural bottom habitats generally create greater opportunity for fish harvested per trip than artificial reefs. Anglers often inquire about the causes of changes in the Red Snapper fishery, and this project’s data provides technical information impactful to fishery management.

Jill Hendon, Director of the USM Center for Fisheries Research and Development and lead of the USM activity on this project, stated, “This project was an excellent example of the comprehensive fishery information that can be generated through collaborative efforts. Mississippi had an immediate need for data on the status of this fishery. We were able to design and implement a joint USM/MDMR program that produced data essential for MDMR to give Mississippi anglers optimal and sustainable opportunities to fish these important resources." 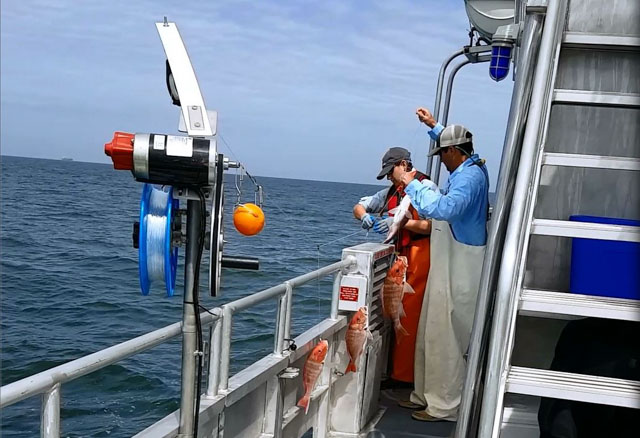 “MDMR is proud of the success of this collaborative project and is confident that the increased knowledge of Mississippi’s Red Snapper stock along with the robust fishery dependent monitoring program will further increase the agency’s ability to manage our Red Snapper fishery in the most optimal manner possible,” said Trevor Moncrief, Director of MDMR’s Finfish Bureau. “We continue striving to increase flexibility and maximize opportunities for our recreational anglers and appreciate their support and participation in the program as that has played the largest role in the success of Tails n’ Scales.”