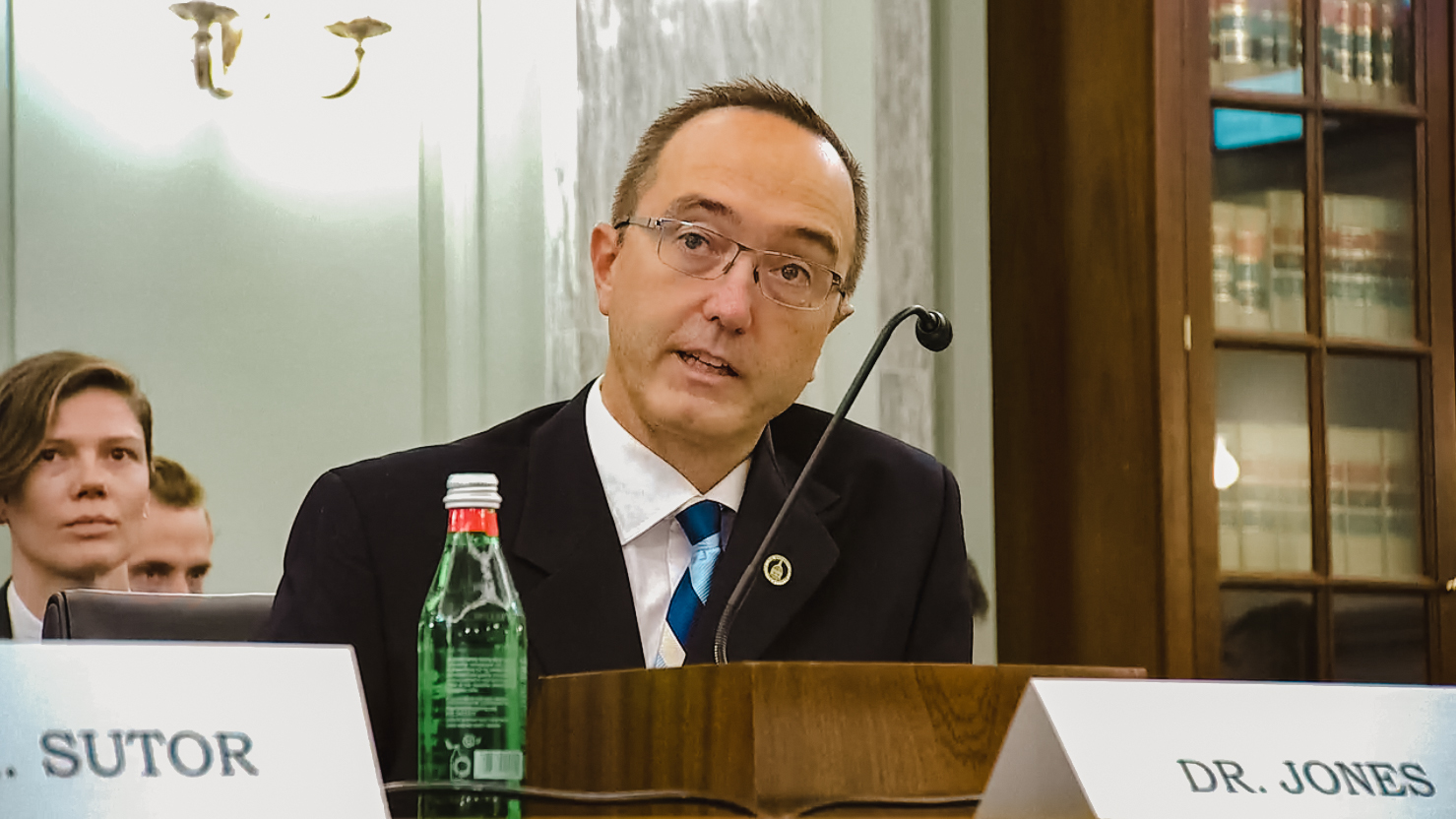 Dr. Henry Jones testified before a Senate committee regarding the importance
of investing in emerging technologies across the country.

Dr. Henry L. Jones, Director of Research Development and Scientific Entrepreneurship at The University of Southern Mississippi (USM), provided testimony regarding the importance of investing in emerging technologies across the country before a U.S. Senate committee on Thursday, Sept. 29 in Washington, D.C.

Applications in these fields are already or have the potential to transform not only computation but also the agriculture, healthcare, industrial, transportation, and national defense sectors, with further social, ethical, and legal implications.

Jones notes that the CHIPS and Science Act includes components that will yield big wins for Mississippi, primarily due to the leadership of Sen. Roger Wicker (R-Miss), a ranking member of the Commerce Committee, ensuring the nation’s technology investments take advantage of the state’s cultural, geographical, and socioeconomical diversity.

“If government program managers have not seen the innovation underway on our Gulf Coast, for example, they might think that Boston or San Francisco is a safe bet – and miss out on the effective, economical, productive ecosystems that build up our resiliency and innovation,” said Jones.

Others testifying before the committee included:

As an entrepreneur and investor, Jones has an extensive background in helping create companies in Silicon Valley, Chicago, Mississippi, and Alabama. After earning a Ph.D. in aeronautics and astronautics at Stanford University, Jones lived in Silicon Valley during the 90’s Dot Com boom. Using science developed in a Mississippi State University lab and the U.S. government’s Landsat 7 satellite, Jones created his first company which developed cutting-edge online products for forestry.

“From the start of my career, I have seen what academia and government and industry can do together,” Jones told the committee.

Jones stressed that government has found it difficult to keep pace with advances in technology. He noted that unexpected innovations come from unconventional connections. In his testimony, Jones explained:

“The latest data-driven research in innovation is finding that cross-pollination of ideas from very different fields is how great leaps forward take place. EPSCoR, the Estab­lished Program to Stim­u­late Com­pet­i­tive Research, enables this type of progress by bringing together universities and their individual innovators and exposing them to unfamiliar concepts in multiple ways. I serve on a statewide EPSCoR board because it makes sense for our universities to work together. What I observed is that the real potential of EPSCoR is its creation of new relationships, better communications between institutions at the faculty level, and policy changes that align incentives for working together, all to create a long-lasting environment of unconventional collaborations.”

Jones expressed to the committee that diversity is a national resource for resilience. He shared that his friends at the big tech giants like Microsoft and Amazon have seen the competitive necessity of a diverse workforce.

“Conforming cultures lead to groupthink and being blindsided by unconventional ideas,” Jones testified. “These companies are seeking diversity in every dimension it can be achieved, yet are struggling most in one particular area – enough trained U.S. citizens. I am sure we have enough capable U.S. citizens, but we are missing something in the early stages of the educational pipeline.”

To illustrate his point, Jones told the committee about a childhood friend and fourth-generation logger whose son is highly proficient in computer programming.

Said Jones, “This family doesn’t know what a STEM (Science, Technology, Engineering and Mathematics) career looks like or how to afford a technical education. Luckily, we now have him on a path to maximize his innate skills and interests. But through this experience I am discovering that there are generational and socioeconomic barriers to STEM futures that can feel insurmountable.”

He continued, “Our University has recently modified our computer science curriculum to incorporate industry certifications as milestones within our degree programs in case a student can’t put four years of courses together at once. Our Center for Military Veterans, Service Members and Families introduces veterans to resources within higher education, and also prompts the academic community to make changes to welcome these potential students who aren’t coming directly from high school. Academic has more innovation we can do.”

Jones’ appearance marked his first time to testify before a congressional committee and he deemed it an honor to serve as a representative for USM.

“This opportunity would not happen without the work of Senator Wicker and his staff to express Mississippi’s interest in this bill, or without the long-term impact that USM has provided for our state and region,” he said.

About The University of Southern Mississippi
The University of Southern Mississippi (USM) is a comprehensive public research institution delivering transformative programs on campuses in Hattiesburg and Long Beach, at teaching and research sites across the Mississippi Gulf Coast, as well as online. Founded in 1910, USM is one of only 146 universities in the nation to earn the Carnegie Classification of Institutions of Higher Education’s "R1: Doctoral Universities – Very high research activity” designation, and its robust research enterprise includes experts in ocean science and engineering, polymer science and engineering, and large event venue safety and security, among others. USM is also one of only 39 institutions in the nation accredited in theatre, art and design, dance and music. As an economic driver, USM generates an annual economic impact of more than $663 million across the state. USM welcomes a diverse student body of more than 14,000, representing more than 70 countries, all 50 states, and every county in Mississippi. USM students have collected four Truman Scholarships and 37 National Science Foundation Graduate Research Fellowships, while also leading Mississippi with 27 Goldwater Scholarships, an honor that recognizes the next generation of great research scientists. Home to the Golden Eagles, USM competes in 17 Division I sports sponsored by the National Collegiate Athletic Association (NCAA). For more information, visit usm.edu.