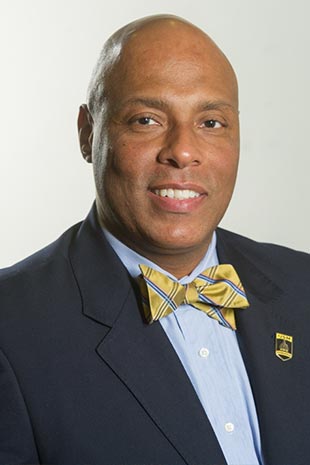 How did USM prepare you to achieve your goals?

Being involved in various student organizations, I had to learn how to interact with a diverse group of people. That skill is useful in my line of work. More than just receiving my degrees, I learned organizational skills, how to negotiate, and the art of diplomacy. Perhaps the most important thing was the friendships that I formed. Those acquaintances developed not only into lifelong bonds but a very influential professional network as well.

I earned a Juris Doctorate from Cumberland School of Law at Samford University in 1999.

I spent several years in private practice beginning with Ferr Smith and Associates in Canton, Mississippi. From there, I worked with Blackmon and Blackmon, PLLC, a founding partner with Smith Rushing Cotton and Robinson, PLLC, and the Law Office of Kelsey L. Rushing. I served as Municipal Court Judge for the City of Canton in 2009-2010.

What would you tell your younger self?

You are where you are today because some courageous and forward-thinking people opened doors for you to be in this space.

You are where you are today because some courageous and forward-thinking people opened doors for you to be in this space. So, always be mindful of the doors you open and bold in the spaces you create.

Was college worth the investment?

Yes. All education is worth the investment.

What was the most impactful topic covered in The Unheard Word?

It was the pieces on Clyde Kennard. As a history minor, the story was of special interest to me. Also, being a Black student at a predominantly white institution in the early 1990s, the story of Mr. Kennard’s attempts to enroll at USM, and his subsequent arrest, had a racially cognitive impact on me as well. Those articles raised the level of social consciousness of the Black students on the campus. When Clyde Kennard’s conviction was overturned in 2006, my initial thoughts went back to what I read in The Unheard Word.


➤ To comment on this spring 2021 article, visit the Center for Black Studies on Facebook.
➤ To give and support the Kennard Scholars, visit the USM Foundation.