Work by members of the Jawor lab at Lake Thoreau has used the Northern Cardinal (Cardinalis cardinalis) as the main species of interest, but the questions asked by students have been varied.  The main research focus in the Jawor lab is Behavioral Endocrinology (the study of how hormones impact behavior) but we address questions concerning Behavioral Ecology and Physiology.  Work is done in the field and lab by both graduate students and undergraduates.

Kaylee’s thesis work at Lake Thoreau examines Northern Cardinal behavior with regards to seasonal territoriality. Currently, there are over 20 mapped cardinal territories with monitored pairs at Lake Thoreau.  Kaylee’s work focuses on how cardinals see neighbors and strangers in terms of level of threat they present and whether there are seasonal changes in who is most threatening. 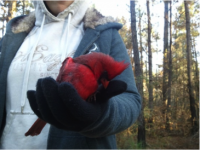 Currently work assessing behavior in the early breeding season has been completed and Kaylee has found that with the onset of breeding, neighboring birds are considered a much larger threat (and therefore are responded to very strongly in terms of aggressive behavior) than out-population strangers are.  Work will soon address the response of individuals to strangers and neighbors during the non-breeding season, and will include analyses for testosterone levels shown during aggressive responses to intruders.  Analysis of their behaviors in and out of breeding season allows us to delineate any patterns in territory defensive strategies being utilized by the birds (e.g., are birds more aggressive to strangers when there are more strangers around, like during the non-breeding season, or are neighbors always the bigger threat for a territorial cardinal).

Matt’s thesis work at Lake Thoreau examines patterns in a different hormone, the ‘stress’ hormone corticosterone.  Corticosterone’s main role is to provide extra energy to an animal via elevation of glucose and it is released both during stressful events (e.g., being chased by a predator) and also during normal, non-stressful, daily activities like waking up (e.g., one needs a burst of energy to get