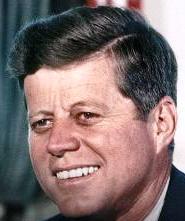 Nearly 50 years after the tragic death of America's 35th president, John F. Kennedy's legacy is still felt in the areas of mass media, public policy and culture, say faculty members at The University of Southern Mississippi.

Mass media and American politics
Kennedy used the emerging prominence of television in the late 1950s and early 1960s to promote his political stance and advance policy initiatives, both at home and abroad. His televised debates in the 1960 presidential campaign with then Vice President Richard Nixon, the first of their kind, changed the nature of politics in America.

“I guess most people consider Kennedy the first TV president, and I agree,” said Dr. Christopher Campbell, director of the Southern Miss School of Mass Communication and Journalism. “Without the televised debates, he very likely wouldn't have been elected. He ushered in the modern era in which presidential candidates absolutely must be effective television performers.”

Campbell said what was also significant about Kennedy is the TV coverage of his assassination, especially the coverage by CBS.  “It ushered in the era of live television news,” Campbell said. “When CBS went on the air for three solid days of coverage, everyone for the first time realized the power of TV as a journalistic medium. Before that, newspapers and radio were the dominant forms of news.”

The Vietnam War
An expert on U.S. Foreign Policy and the Vietnam War, Southern Miss associate professor of history Heather Stur is a fellow in the university's Center for the Study of War and Society, and is currently spending the 2013-2014 academic year as a Fulbright Scholar at the University of Social Sciences and Humanities in Saigon.

Though the Vietnam War is most often associated with Kennedy's successor Lyndon Johnson, Stur says JFK's engagement in the conflict was significant. Like Eisenhower and Truman before him, she said, Kennedy shaped his foreign policies according to the belief communism was a serious threat to U.S. global interests and security.

By the time Johnson took office, the U.S. was already deeply involved in Vietnam due to Kennedy's policies. During Kennedy's short presidency, he expanded the U.S. defense budget, approved additional spending on the Army Special Forces (aka the Green Berets), and increased the number of American political and military advisers in Vietnam from a few hundred when he took office to approximately 15,000 when he was assassinated in November 1963.

“Historians continue to debate the issue of if and when Kennedy would have withdrawn the U.S. from Vietnam, and while evidence suggests that, by 1963, Kennedy was conflicted about the U.S. mission in Vietnam, no clear indications about his long-term plans have been found,” Stur said.

The civil rights movement
While initially hesitant to involve the federal government in the civil rights struggle, Kennedy, through pressure from foreign diplomats and civil rights leaders, came to appreciate the value of supporting the movement for black equality, said assistant professor of history Rebecca Tuuri.

“By the spring of 1963, he had come to see the struggle of African Americans as a moral one,” Turri said.

On June 11, 1963, Kennedy called for the passage of a Civil Rights bill that would outlaw discrimination in public accommodations, strengthen voting rights, and enforce equal employment for all. Though Kennedy's burgeoning efforts in civil rights were cut short by an assassin's bullet, Lyndon Johnson expanded upon his predecessor's initiative and helped push through the Civil Rights Act of 1964 and the Voting Rights Act of 1965. These two pieces of legislation finally made voting rights and equal employment opportunity realities for African Americans.

Domestic economic policy
Louis Kyriakoudes, professor of history and director of the university's Center for Oral History and Cultural Heritage, is an expert on the economic history of the U.S. He said one of the key domestic policy initiatives of the Kennedy Administration was the Revenue Act of 1964, passed shortly after his death.

The focus of the act was a progressive tax cut geared toward those in lower income brackets and designed to infuse spending on domestic goods and services.

“Kennedy's economic policy was embodied in this legislative initiative, which cut taxes across the board, but especially aided lower-income families,” Kyriakoudes said. “Today, many conservatives who support supply-side economic policy point to the Revenue Act of 1964 as an example of its success, but the tax cuts were designed to create a bubble-up increase in consumer demand rather than a trickle-down increase in investment.”

Kennedy assassination and the single-bullet theory
The assassination of President Kennedy inspired a cottage industry of conspiracy speculation and books about the event, suggesting multiple parties and individuals were involved in the killing of the president. In its investigation of the assassination, the Warren Commission posited the single bullet theory, contending that one of the bullets fired in the assassination passed through Kennedy's neck and struck Texas Gov. John Connally, who was riding in the front of seat of the limousine carrying both men. Many who contend there is more than one perpetrator in the assassination believe this assertion is false (derisively referring to it as the “magic bullet” theory) and used by the commission to justify its conclusion that Lee Harvey Oswald was the lone shooter.

Dr. Dean Bertram, an instructor of forensic science in the university's School of Criminal Justice, includes discussion and analysis of the single bullet theory in his training of students on crime scene reconstruction, including ballistics and firearm identification.

“Whether you believe in the single bullet theory in the Kennedy assassination, it is still one of the most debated forensic science events in history,” Bertram said. “As an instructor it is one of my favorite topics since it allows students to realize the importance of physics.”

Bertram said that with modern equipment such as the total station (survey equipment) used to plot bullet trajectories using laser technology, or high definition 3-D scanners, or high tech computer animation that can re-enact the event, crime scene investigation has vastly improved since the day Kennedy was shot. “If we had 2013 technology and personnel back then, the science would and could not lie,” he said.