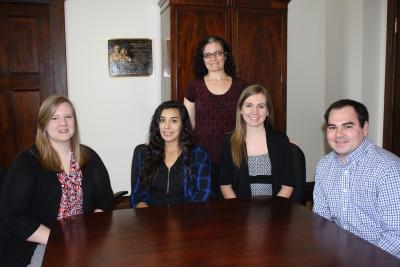 Four University of Southern Mississippi students have been awarded prestigious National Science Foundation Graduate Research Fellowships, marking the first time the University has produced this many winners in a single year.

Laken Kendrick, of Hattiesburg, Miss.; Abagail Williams, of Independence, Mo.; Dexter Dean of Clinton, Ala.; and Cassandra Reese, of San Diego, Calif., were granted the fellowships from a pool of 16,500 applicants. No other Mississippi college or university matched Southern Miss in NSF Fellowship winners for 2015.

“Since 2009, USM has compiled a strong record of success in the NSF competition with multiple fellows selected almost every year. This year, however is our best result ever,” said Robyn Curtis, Officer of National Scholarships and Fellowships at Southern Miss. “That our success rate was so much higher than the national average says great things about the quality of research being conducted at USM as well as the mentorship our students are receiving from our faculty.”

Awardees represent a diverse group of scientific disciplines and come from all states, as well as the District of Columbia, and commonwealth and territories of the United States. Since 1952, NSF has provided fellowships to individuals selected early in their graduate careers based on their demonstrated potential for significant achievements in science and engineering. The award is a $34,000 stipend annually for three years as well as a cost of attendance allowance covering tuition.

To learn more about applying for the NSF Fellowship or other nationally competitive awards at Southern Miss, contact Robyn Curtis at 601.266.4263 or robyn.curtisFREEMississippi