Former USM Standout Dozier Making Most of Opportunity with Twins 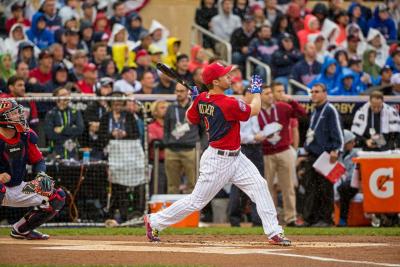 Milwaukee Brewers pitcher Matt Garza just missed his spot, elevating his pitch slightly from the catcher's target and catching too much of home plate. At the crack of the bat it was obvious — Minnesota Twins second baseman Brian Dozier had not missed the opportunity.

The former Southern Miss standout lifted the ball well beyond the right field fence at Minnesota's Target Field for his first career grand slam, giving the Twins the lead in what would eventually result in their third straight win.

It is August, and that means Dozier is heating up. The grand slam on Tuesday night was his fourth home run in less than a week, and the 2015 Major League Baseball (MLB) All-Star is just one torrid late summer removed from setting an all-time American League record for home runs in a season by a second baseman. While early August appears to be the same for Dozier, what is different is that this year, the Twins are part of the postseason conversation.

“It's been great, especially where we were at last year — being candid, the worst team in baseball,” said Dozier, who was an eighth-round selection by the Twins in the 2009 MLB Draft. “The fact that you have meaningful games down the stretch makes a world of difference. We are still very young, but we are very talented and playing good baseball.”

The difference, Dozier said, comes down to executing the routine plays.

“You have to be fundamentally sound,” he said. “You have to do the little things right—all the time. You are going to make mistakes. You are going to strike out. You're going to go through slumps. But what never fails is good defense—keeping double plays in order, hitting the cutoff man—we got away from that last year. We went into spring training this year knowing we had to clean up a bunch of stuff. We did that, and defense has been the deciding factor.”

Playing meaningful games deep into the season is something Dozier did frequently during his time as a Southern Miss standout from 2006 to 2009, earning NCAA Regional trips all four seasons, punctuated by a College World Series appearance in 2009. Dozier still values his time as a Golden Eagle, playing at Pete Taylor Park.

“I love that when you traveled around our conference and then came back home and see the attendance—when you play in front of 3, 4, or 5,000 people, that was big for me,” Dozier said. “Even when you go to the Rices, the Mississippi States, the Alabamas, the Ole Misses, we matched or even exceeded their attendance. Our attendance and our fan base was off the charts. Even now, I talk with Tyler Duffy and Anthony Rendon, who played at Rice, and they say that Hattiesburg was their favorite place to play.”

The lessons learned as a Golden Eagle extended beyond the baselines, Dozier said.

“I had amazing coaches, and I can vividly remember many times when it was eye-opening, and I thought ‘Are we talking baseball here, or are we talking more about life here,'” he said. “As a college kid, you get caught up in baseball and having fun, but looking back at it, you realize the investment they were making in you as a person and as a man.”

Dozier still ranks near the top of several categories in the Southern Miss baseball record book, but his senior season almost ended with an injury. Thirty-five games into that year, he dove for a ball in the hole between shortstop and third base and injured his shoulder, an injury that was expected to end his Golden Eagle career. Shortly thereafter, longtime head coach Corky Palmer announced his plan to retire at the conclusion of the season, and a year that started with promise seemed headed for, at best, an obscure end.

But the Eagles got hot down the stretch, bolstered by Dozier's replacement, then a little-known freshman named B.A. Volmuth, who would go on to become a third-round pick of the Oakland A's. After winning an NCAA Regional at Georgia Tech, then sweeping a Super Regional at Florida, Dozier was healthy enough to convince Palmer to keep him on the roster.

“I wasn't supposed to play again in college, but we made the run to Omaha,” Dozier recalled. “To be honest, I lied a little to Coach Palmer and told him I was ready so he would put me on the roster. But I was still a little banged up, and Coach Palmer would maybe DH or pinch hit.

“Sure enough, my chance came in a tied game against Texas, and now I have the only catcher's interference in the College World Series since 1971,” he quipped. “I had to get on base somehow, and I knew it wasn't going to be a hit or a home run—so I had to scoot back a little bit and hit the catcher's glove.”

On a different occasion, but again on the big stage, Dozier did look for the home run. In 2015, he represented the Twins at the MLB All-Star Game; in his only at-bat, he hit a two-strike pitch over the left-center field wall in Cincinnati.

“(Cleveland second baseman Jason) Kipnis is one of my better friends, and he hit in the sixth inning,” Dozier explained. He was due back up in the eighth and said, ‘I've already got my at-bat; you go ahead.' I didn't even have my bat, and I had to run back to the clubhouse.

“It was a good thing we were playing in Cincinnati, which is a band-box to hit in,” he continued, noting the ball narrowly cleared the wall. “The only thing I regret is I took it so serious on the field; they were making fun of me upstairs because I wasn't smiling. I think I was just overwhelmed with everything.”

With All-Star games and American League records already highlighted on his significant résumé, Dozier will be a free agent at the end of next season with his future uncertain. For now, though, he is focused on helping the Twins to the playoffs.

“In my six years, I've never made the postseason,” he said. “As you get older, you want to stay up here; then you want to establish yourself as an everyday player. At the end of the day, it all comes back to winning. Last year, it was miserable at times, but this year is completely opposite. Winning and getting into the postseason is where I'm at now.”

Whenever the season concludes, Dozier, a native of the north Mississippi town of Fulton, will once again come back to the Hattiesburg area, where he and wife Renee live in the offseason.

“I grew up wanting to stay in north Mississippi until Coach (Scott) Berry and Coach Palmer recruited me,” he explained. “I fell in love with it. My mom joked that I would never come home. I loved it in Hattiesburg so much, and it's true. My wife and I love Hattiesburg, and that's where we are going to make our home. Southern Miss is very family-oriented, and it is the same way with the Twins. It's a blue-collar university that does things the right way.”

Dozier draws parallels between the two states and says Twins' fans have treated him and Renee wonderfully over the years.

“When you get outside the city, Minnesota is just like Mississippi. I go turkey hunting in April and May and deer hunting in November, and that is my escape,” he said. “At the same time, ‘Minnesota nice' is what they are known for, and it's just like in the South. Everyone loves one another and is helpful. The hospitality is off the charts, and that means a lot to me.”