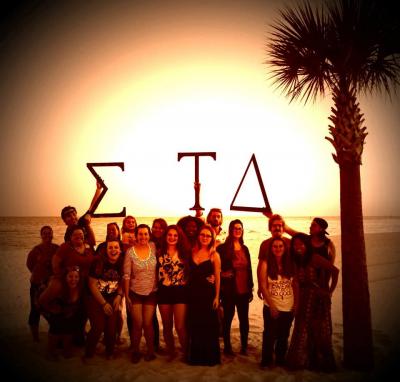 The Alpha Pi Eta chapter on the Gulf Park campus in Long Beach was honored with the Outstanding Chapter Award for exemplifying the values of Sigma Tau Delta during the 2016-17 academic year.

One of three chapters honored across the globe, the Alpha Pi Eta chapter on the Gulf Park campus in Long Beach was honored with the Outstanding Chapter Award for exemplifying the values of Sigma Tau Delta during the 2016-17 academic year. The chapter received $500 and a plaque, along with the potential to receive an additional $350 for travel assistance to the 2018 International Convention in Cincinnati, Ohio.

“As the sponsor of our USM Gulf Park chapter, I am very proud of our student members who have shown dedication, enthusiasm and brilliance in promoting the love of literature,” said Dr. Damon Franke, associate professor of English and chapter advisor. “This national recognition of their achievement not only registers their success in the recent academic year, but also speaks to the work and commitment of all of our chapter members since we were founded 10 years ago.”

Held in November 2016, the Common Reader event celebrated American author, Megan Mayhew Bergman, and the historical women found in her collection of historical fiction Almost Famous Women by displaying booth exhibits that foregrounded the background and unique accomplishments of the different women in the collection. For this project, the Gulf Park chapter received one of Sigma Tau Delta's Regents' National Common Reader Awards and was commended by Sigma Tau Delta International President William C. Johnson for having “one of the most impressive, well-conceived, well-executed Sigma Tau Delta chapter projects” he has ever seen.

Sigma Tau Delta is an international collegiate English honor society founded in 1924 at Dakota Wesleyan University, whose mission is to promote literacy and the study of literature. Members consists of students of English at universities and colleges who are within the top 30 percent of their class. It presently has over 880 chapters in the United States and abroad and is the largest honors organization in its field.