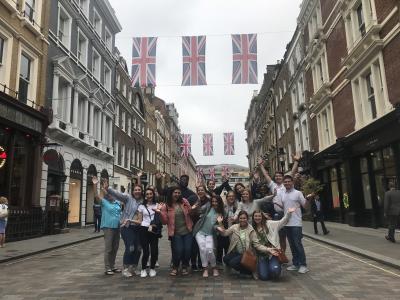 The idea of living and studying overseas might seem a bit too foreign for many college students. But at The University of Southern Mississippi,  study abroad programs remain a vibrant, popular option for students hoping to expand their academic and cultural horizons.

From the United Kingdom to Italy; from Peru to The Netherlands; from Belize to Austria, USM's study abroad programs offer opportunities for travel and education in more than 10 countries. During the 2017-2018 academic year, approximately 275 students participated in the program, which includes course credit toward their respective degree plans.

The program is open to all students (freshmen-seniors) who meet the minimum requirements – typically at least a 2.0 GPA, with no disciplinary or academic probation issues. The time students spend abroad can vary from two weeks to an academic year, depending upon the course of study. Students also are required to obtain a valid passport.

Sarah Egerer, director of the USM Office of Study Abroad, says that the benefits gained by students who participate in the program are practically too numerous to count.

“Students have cited things like a change in world view, an increase in self-confidence, a deeper interest in global issues, and improvement in foreign language proficiency,” said Egerer.

She notes that the experience can also lead to professional rewards.

“In a survey of 400 executives, 78 percent said all students should gain intercultural skills,” said Egerer. “And many other skills employers look for in job applicants can be attained by studying abroad, such as appreciating and interacting with individuals different from yourself.”

Sawyer Walters, a senior criminal justice major from Hattiesburg, Miss., is currently studying with a large group as part of USM's British Studies Program. His first impressions of life in Great Britain have been eye-opening and unforgettable.

“My study abroad experience is allowing me to see sights and learn history that I would otherwise not be able to enjoy,” he said. “It has pushed me as a student and as an American, and I've enjoyed every moment of it. I can't wait to see how much more that there is to offer.”

Walters does concede one small drawback thus far. “Now, if only we can get them on the sweet tea train,” he mused.

Dr. David R. Davies, director of the USM School of Mass Communication and Journalism, has been involved with the British Studies Program for the past 20 years and has served as the program's director since 2013. He points out that the program's primary focus is “active learning.”

“Our students experience London first-hand by going on field trips that inform them about their academic subject. They also hear from expert British lecturers,” said Davies.

There are currently 110 students participating in the British Studies Program which runs from June 1 through July 12. Students take one of 10 courses in the following subjects: art, business, dance, children's literature, gothic literature, history, music history, library science, journalism, and psychology.

Davies emphasizes that studying abroad makes students more confident in their abilities and enhances their independence.

“Studying in another country is also a great resumé builder, since employers are looking for students with the independence, drive, and specialized knowledge that international experience provides,” he said. “In today's international economy, studying abroad gives students the skills they need to succeed.”

Ceili Rassier, is a junior from Hattiesburg, Miss., seeking a double major in international studies and political science. She lauds the study abroad program for creating an opportunity to live for an extended period of time outside her customary confines.

“Just within my first week I have learned so much about the culture and history of London thanks to Dr. (Andrew) Wiest's class. And just within a week's time, I have grown more confident in my own ability to adapt to new, exciting situations,” said Rassier.

“Returning students are also contributing to the University's internationalization,” she said. “They can contribute to class discussions in new ways, share their stories with others and become involved in international organizations on campus.”

Egerer notes that the Office of Study Abroad hopes to offer a summer internship program in Prague, Czech Republic next year with placements in multiple disciplines in English. New summer exchange programs in Budapest, Hungary and Galway, Ireland are under consideration as well.

Further, efforts are being made to reach students who have been traditionally underrepresented in study abroad, such as first-generation college students and racial and ethnic minority students.

Whether standing in the shadows of London's Big Ben or gazing upon the Sistine Chapel in Rome, studying abroad exposes USM students to a world of wondrous possibilities.

As Rassier so succinctly summarizes, “Studying abroad offers numerous opportunities for students of all classifications to travel outside their comfort zones and blossom into more enlightened and confident individuals.”