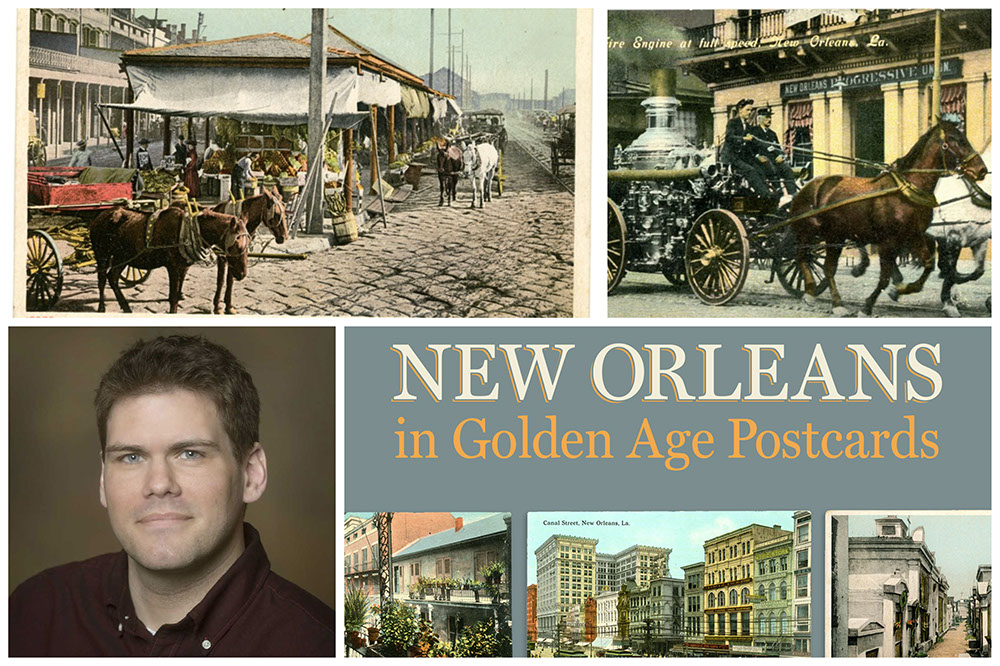 University of Southern Mississippi (USM) associate professor Matthew Griffis, a faculty member in the College of Education and Human Sciences’ School of Library and Information Science, has produced a new book, New Orleans in Golden Age Postcards (University Press of Mississippi). Griffis’ work includes colorful vintage postcards from 1900-1920, depicting various scenes of New Orleans that capture its natural and architectural beauty, and the comings and goings of its residents and visitors as they work, shop, play and enjoy life to the fullest in this enchanting city. Griffis recently took time out to discuss the book with Southern Miss Now.

What inspired you on this project?

I’m Canadian, and I moved here in 2013 to work as a professor for USM. I teach library and archival studies, so I’ve long had an interest in local history and the history of print materials. New Orleans in Golden Age Postcards seemed like a natural outcome, since I’d collected vintage postcards of New Orleans for years and “deltiology”—the fancy word we now use for the study of postcards and their history—was one of my research specializations. I’d also co-authored (in 2016, with Dr. Elwood Jones of Trent Valley Archives) a book about the history of postcards in my hometown of Peterborough, Ontario, and its surrounding region. That project had been an enjoyable experience; but I don’t live in Canada anymore. So, I decided to write something related to my current home, the South.

How did you begin collecting New Orleans postcards?

When I first saw New Orleans in the summer of 2011, it left such an impression on me that I began collecting old postcards of the city almost immediately. I didn’t think that my collection would ever become so large; but it quickly became one of my fastest growing collections—and, of course, it grew even more rapidly after I moved here, because New Orleans is so close. Collecting those cards became such an enjoyable way to learn more about the city’s architectural, social, and cultural history.

What does the book include?

The book reproduces well over 300 postcard images of New Orleans ca. 1900 to 1920 in full color. It’s large and heavy; the book’s designer did such a wonderful job. Some images have appeared before in other books about New Orleans, but most haven’t been seen publicly for generations.

The first chapter is the book’s only “proper” chapter because it contains more text than images. It covers the history of postcards and then explores the New Orleans contexts. Each remaining chapter is defined by theme (business and industry, recreation, and so forth) and acts like an annotated postcard album.

The text explains each card’s subject (usually a place, person, or event), why that subject would’ve appeared on a postcard at the time, and how that subject has changed (if at all) since the early 20th century. Many cards depict old buildings that either have changed so dramatically over the past century that they’re now unrecognizable, or simply no longer exist.

What do you hope readers will take away from the book?

Although its publisher is an academic press, I wrote the book primarily for non-academic readers. I hope that it teaches readers many things they didn’t already know about the history of New Orleans, and also leaves them with a deeper appreciation for old postcards as visual artifacts. Many people don’t realize that postcards existed so long ago, or that those early cards—especially those printed between 1900 and 1920, the postcard’s so-called “golden age”—were so stunning.