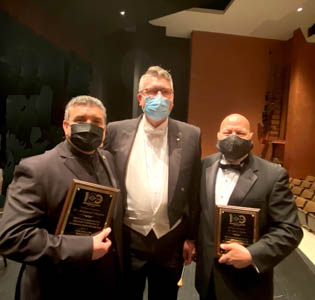 A recent concert by the Symphonic Winds saw two previous conductors of the group, Dr. Gary Adam and Dr. Mohamad Schuman, returning to help the program celebrate its 101st Anniversary. They conducted the group and were presented plaques honoring their legacy to the storied band program.

“A celebration of the centennial of bands at USM would not be complete without honoring these two gentlemen who gave so much to the program,” said Dr. Colin McKenzie, director of the School of Music and the Symphonic Winds.

Adam began his career in teaching at North Forrest High School where he remained from 1987-1996. Under his leadership, the band grew from 49 members in 1987 to 115 during his final year there in 1996. During the Summer of 1996, Adam joined the USM Department of Bands as Assistant Director of Bands-Director of Pep Bands. His responsibilities included Assistant Director-The Pride of Mississippi Marching Band, Director-Golden Eagle Basketball Pep Bands, Director-USM Concert Band and Instructor-Instrumental Band Methods and remained in this position until 2002.

During the Fall 2002, Adam became Director-The Pride of Mississippi Marching Band and, during the Fall 2003, began the tenure-promotion as the Associate Director of Bands at the university. During this time, Adam took The Pride of Mississippi Marching Band  to several post-season Bowl Games, The Easter Festival in Edinburgh, Scotland and served as a guest clinician through the Southeastern United States and as an  adjudicator for concert and marching ensembles throughout the United States.

He is currently enjoying his twelfth year of retirement from the Mississippi Public Employees Retirement System.

“It was truly an honor to share the stage with Dr. Colin McKenzie and his wonderful students in the Southern Miss Symphonic Winds,” said Schuman. “I look forward to following the many successes that I know he will bring to USM as the new Director of the School of Music. Additionally, it was great to share the stage with former Symphonic Winds Director, Dr. Gary Adam as well as visiting with former students and colleagues.”

The celebration continues Nov. 27 as all Pride of Mississippi Marching Band are invited to participate in the 101st edition of Alumni Band. Registration for that event is open through Oct. 31 at usm.edu/bands.

For more information about the Southern Miss School of Music, visit usm.edu/music.