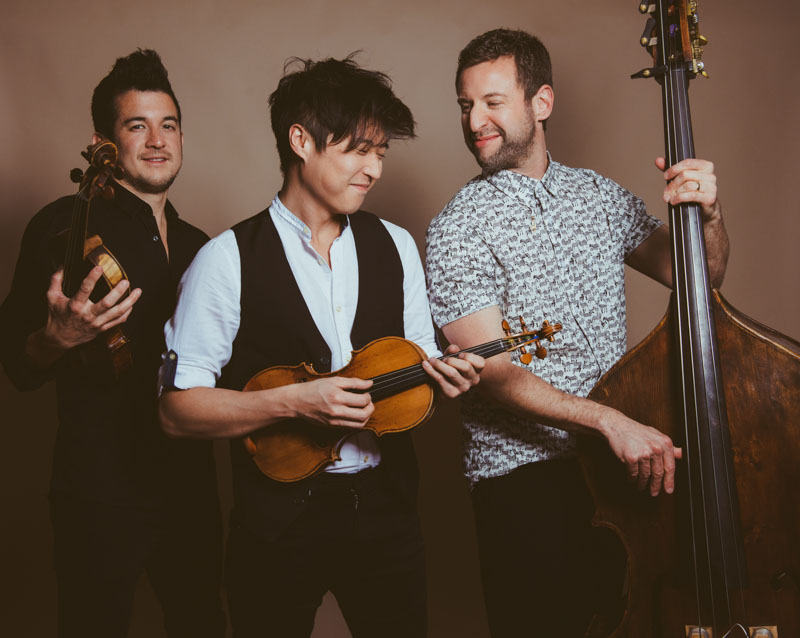 The University of Southern Mississippi (USM) Symphony Orchestra welcomes the Emmy Award-winning artistry of Time for Three in a one-night-only concert event, Thursday, Nov. 11 at 7:30 p.m. in the Mannoni Performing Arts Center Auditorium.

Remaining tickets are available at the Southern Miss Ticket Office, 800.844.8425, 601.266.5418, or southernmisstickets.com. The group will also perform a free educational livestream on Wednesday, Nov. 10 at 11 a.m. on the School of Music’s YouTube page, youtube.com/usmmusic1.

“Time for Three performs everything from the Beatles to Guns n’ Roses to Mahler,” said Dr. Michael Miles, music director of the Symphony.  “Add to that Strauss’ dynamic and exciting Don Juan performed by our USM Symphony Orchestra, and I guarantee there will be something for everyone in this program.”

Defying convention and boundaries, Time For Three stands at the busy intersection of Americana, modern pop, and classical music. To experience Time For Three (TF3) live is to hear the various eras, styles, and traditions of Western music fold in on themselves and emerge anew.

Bonded by an uncommon blend of their instruments fused together with their voices, Charles Yang (violin, vocals), Nicolas “Nick” Kendall (violin, vocals), and Ranaan Meyer (double bass, vocals), have found a unique voice of expression to share with the world.

Earning praise from NPR, NBC, The Wall Street Journal, and the Chicago Sun-Times to name a few, the band has become renowned for their charismatic and energetic performances. Having graced the stages of Carnegie Hall, The Kennedy Center, and The Royal Albert hall, their inimitable and mutable style fits equally well in an intimate club setting, like Joe’s Pub in New York, or Yoshi’s in San Francisco.

In 2016, Time For Three was featured on the famed “Night of the Proms” tour, sharing the stage with such artists as Chaka Khan and Ronan Keating, playing arenas throughout several European countries.

They’ve appeared on ABC’s Dancing With The Stars, and won an Emmy for “Time For Three In Concert,” produced by PBS. Yet for all their accolades and diverse experiences, the irrepressible band constantly hungers for new ones. In 2020, the band partnered with cellist and composer Ben Sollee to put together the soundtrack to the new Focus Features' film Land, starring and directed by Robin Wright. The film first premiered at the Sundance Film Festival on January 31, 2021.

With a collection of new songs, the band has teamed up with GRAMMY-winning songwriter Liz Rose and GRAMMY-winning producer Femke Weidema for new recordings released through Warner Music.