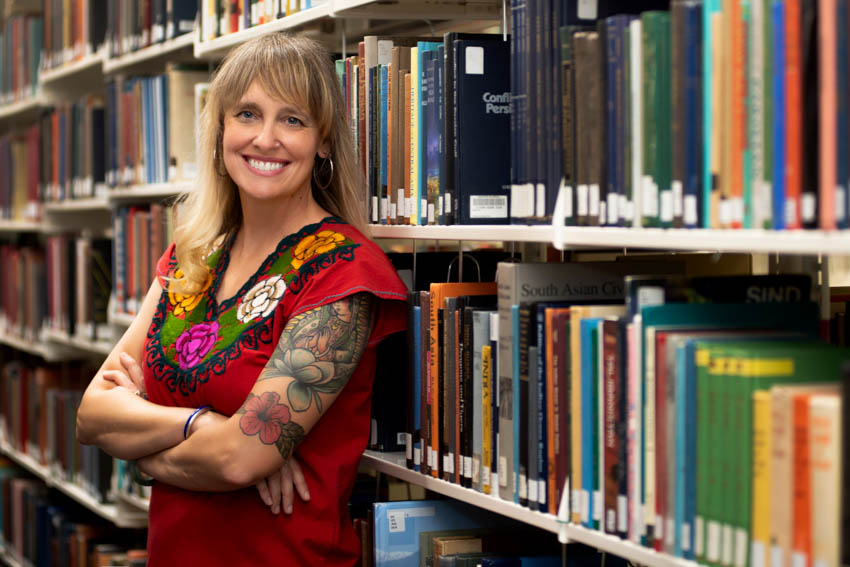 Dr. Heather Stur, a professor in The University of Southern Mississippi (USM) School of Humanities and an internationally recognized expert on the Vietnam War, is the recipient of the Charles W. Moorman Distinguished Alumni Professor of the Humanities for 2021-2​3, one of the most prestigious honors bestowed upon a member of the University’s faculty.

The Moorman Professorship honors Dr. Charles W. Moorman, a longtime USM professor of English and Vice President for Academic Affairs in the 1970s. It is made possible by the USM Foundation through a matching grant from the Phil Hardin Foundation and is awarded biennially for a two-year term to a senior professor in English, history, foreign languages, or philosophy.

Dr. Stur will receive support through the Moorman Professorship for research on her book about Gen. Buford “Buff” Blount and the U.S. Army Third Infantry Division’s 2003 invasion of Iraq. The book, ​which is under contract with Osprey Publishing, will be released in 2023 to mark the 20th anniversary of the operation, which culminated in the taking of Baghdad and dismantling of Saddam Hussein’s regime. She will also present a public lecture at the end of her term as the Moorman Professor.

“Receiving the Moorman Professorship is one of the greatest honors of my career so far,” Dr. Stur said. “The designation puts me in the company of some of my most accomplished colleagues in the School of Humanities, including my friend and mentor, Andrew Wiest.

“I’m grateful to the Moorman award committee and external reviewers for believing in the value of my project. For the committee to select me from a competitive field of applicants is wonderful validation of my work.”

A 1971 USM graduate, Blount enjoyed a distinguished career in the U.S. military, earning the rank of major general before retiring in 2005. The Bassfield, Miss. native lead the U.S. 3rd Infantry Division into Baghdad in 2003, toppling the regime of Iraq dictator Saddam Hussein in the second Gulf War. The University’s Dale Center for the Study of War & Society honored Gen. Blount with the establishment of the Gen. Buford “Buff” Blount Professorship in Military History, which Dr. Stur earned in 2017.

“With Gen. Blount being a native Mississippian and USM alumnus, there’s a fascinating connection between our university, our state, and one of the most important military interventions of the early 21st century,” Dr. Stur continued.

As part of her research for the book, Dr. Stur traveled with Gen. Blount to Fort Stewart, Georgia, where the Third Infantry Division is stationed. She got to ride in a tank, observe a battle simulation, and talk to armor crews to get a sense of what their jobs were like in Iraq and Kuwait, the staging area for the invasion.

“Over the past few years, I’ve had the good fortune to get to know Gen. Blount and talk with him at length about his storied military career,” Dr. Stur said. “As commander of the Third Infantry Division, his decisions shaped the course of U.S. military history in Iraq. To have access to someone who made history like that is amazing.

“I’ve spent most of my career immersed in the history of the Vietnam War, so it’s been invigorating to shift my focus to a new time period and a new conflict. I’ve learned a ton during the past few years of doing research on it, and I’m excited to write the book.”

Dr. Stur earned her Ph.D. from the University of Wisconsin and joined the USM History faculty in 2008. An internationally recognized expert on the Vietnam war, she was chosen for a Fulbright scholar award in 2013 to study and teach in Vietnam at the University of Social Sciences and Humanities in Ho Chi Minh City. Her research expertise includes gender and war, U.S. foreign relations and post-1945 America. She is author ​most recently of Saigon at War: South Vietnam and the Global Sixties, ​and The U.S. Military and Civil Rights Since World War II, which w​ere supported by the Blount Professorship; and Beyond Combat: Women and Gender in the Vietnam War Era, among other books and academic journal articles. She was one of four USM faculty members and two USM alums who contributed to a 2017 New York Times series titled “Vietnam ‘67” which captured the political and cultural turbulence roiling America in 1967, with the Vietnam War as the centerpiece.

A ​co-director USM's Dale Center for the Study of War and Society, Dr. Stur was a former co-director of the University’s Center for Oral History and Cultural Heritage; she currently serves as director of graduate studies for the USM History program. Among many other honors. Dr. Stur is also ​the ​inaugural recipient of USM’s Nina Bell Suggs Professorship and its College of Arts and Letters Junior Faculty Research Award.

“Dr. Stur’s selection as our incoming Moorman Distinguished Professor recognizes the quality, impact, and relevance of her work in military history at national and international levels,” said Dr. Chris Winstead, dean of the USM College of Arts and Sciences. “Her scholarship builds upon and extends the outstanding work of the Dale Center, and captures important lessons learned in Iraq that will inform not only students and scholars of history, but future civilian and military leaders as they consider their options in international affairs.

“Her work is also particularly compelling, given our commitment as an institution to our veterans and the engagement of former military leaders in the USM and Hattiesburg communities.”