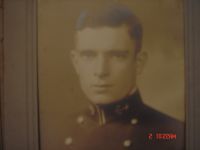 Dr. Hugie Lee Foote, Jr. (1911-1979) graduated from the U.S. Naval Academy in 1933. He is pictured here in his Academy uniform. His first assignment, from July 1933 to July 1936, was on the U.S.S. Arizona. He received the commemorative medallion shown below when the Arizona crossed the equator on May 26, 1936. From December 1940 through November 1942, he was assigned to the U.S.S. Concord. Although the home port of the Concord was Pearl Harbor, the vessel was out of port at the time of the Japanese attack on December 7, 1941.

Hugie Foote received a master's degree in English, then went on to earn a Ph.D. in physics from the University of Utah in 1954. For many years he worked at Bell Laboratories on Long Island, where he was engaged in research in nuclear physics.

Upon his retirement he returned to his home in Hattiesburg, where he lived with his sister Polly Waggoner in the "Foote House" on East Fifth Street. Once back in Hattiesburg, he continued his lifelong pursuit of learning by studying classical Greek, French, and Egyptian hieroglyphics. For several years, he was seen regularly around the Foreign Language Department, taking courses and enjoying lively conversations with students and faculty, especially Dr. Roger Johnson, with whom he undertook many forays into the field of languages.

Upon Dr. Foote's death, his sister, the late Mrs. Waggoner, established an endowed scholarship in his memory and honor. Over the years, the fund has benefited from further contributions from relatives of Dr. Foote, as well as from students who received financial assistance, and from faculty members. 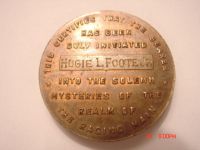 Contribute to this fund.