Sarah Stevenson Johnson (1905-1977) earned her B.A. (1927) and M.A. (1928) in French from the University of South Carolina. She taught French and Latin at Reinhardt College in Georgia, where she met and married William Linnaeus Johnson (1904-1948), who was dean and professor of mathematics there. In 1942, after W. L. Johnson had taught several years at Texas A&M, they 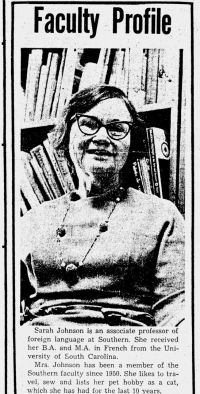 came to USM, where he was a professor of mathematics and later chair of the department. After her husband’s death, Sarah taught in the USM Latin American Institute, which was later to become the English Language Institute. After a year as instructor of French and Spanish at William Carey College (at that time known as Mississippi Woman's College), she joined the faculty of the Foreign Language Department at USM in 1950 (see faculty profile), where she taught until her retirement in 1970.

Sarah Stevenson Johnson always understood the great importance of foreign travel and study, especially during the difficult times of the Depression and WWII. In 1929, she studied at L’Institut de Touraine in Tours and took as many side trips as possible. In her passport photo she is shown with her sister, Peurifoy (Foy) Stevenson (1909-1999), who was later to endow the scholarship fund which bears her name.

In 1950 Sarah was awarded a Buenos Aires Convention fellowship for study at the National Teachers College in Bogotá, Colombia, where for several months she participated in Spanish language courses and observed the teaching of English as a foreign language. In 1955 she returned to France with the Temple University Study Group for summer courses at the Sorbonne, followed by another summer in the language laboratory at Purdue. In 1967 she was selected for the NDEA summer Institute for College and University Trainers of Prospective Modern Language Teachers at the University of Minnesota.

Over the years, the Sarah Stevenson Johnson Scholarship Endowment has benefited from further contributions from her children, Mary Lynn Johnson Grant, William L. Johnson, and the late Charlotte Johnson Lackey, as well as from students who received financial assistance, and from faculty in the Foreign Language Department.

Contribute to this fund