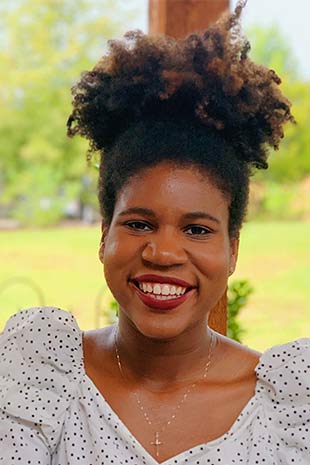 Why did you decide to choose a minor in Black Studies?

Like many other students, I didn’t learn much Black history in my K-12 and college courses. Anything about Black people was boiled down to a fun fact during Black History Month or a quick summary about the enslaved or the Civil Rights Movement in history class. I knew minoring in Black Studies would give me the opportunity to not only learn more in-depth Black history, but also give me the opportunity to actively share my knowledge through service-learning.

What course(s) did you take at USM that enhanced your interests in Black Studies? If possible, identify the instructor as well.

Before I declared Black Studies as my minor, I realized I enjoyed studying anything race-related when I took Dr. Cheryl Jenkin’s “Gender, Race, and Media” class. I learned so much about the history of Black representation in news and film and coding and critically analyzing media texts. After I declared Black Studies as my minor, I enjoyed taking Dr. Rebecca Tuuri’s “African American History” course. Prior to her class, I had never taken a history course where Black people were at the center of history and seen as the agents of their own fate. I grew an increased interest in historical documents and had the honor of learning about Black revolutionaries, government leaders, and artists who were doing amazing work prior to the Civil Rights Movement.

How did minoring in Black Studies enhance your major studies at USM?

Being a journalist, I obviously love telling other people’s stories. However, I always felt the most fulfilled when I told stories where Black people were front and center. After I became a Black Studies minor, I used the history I was learning in class for story ideas. For example, after I learned about Hiram Revels, the first African American to serve in the  U.S. Congress, I wrote a story about the Senate race, how few African Americans have served in Congress, and the significance of Mississippi possibly electing the first African American to the Senate since Reconstruction.

Black Studies emphasized the importance of learning history, framing Black people as change agents, and recognizing everyone in the African Diaspora. In my journalism career, I intend to continue to look to history for context and give Black people a platform by using them as sources and being mindful of how they’re framed. I also hope to further diversify my sources by talking to Black people who don’t identify as African American.