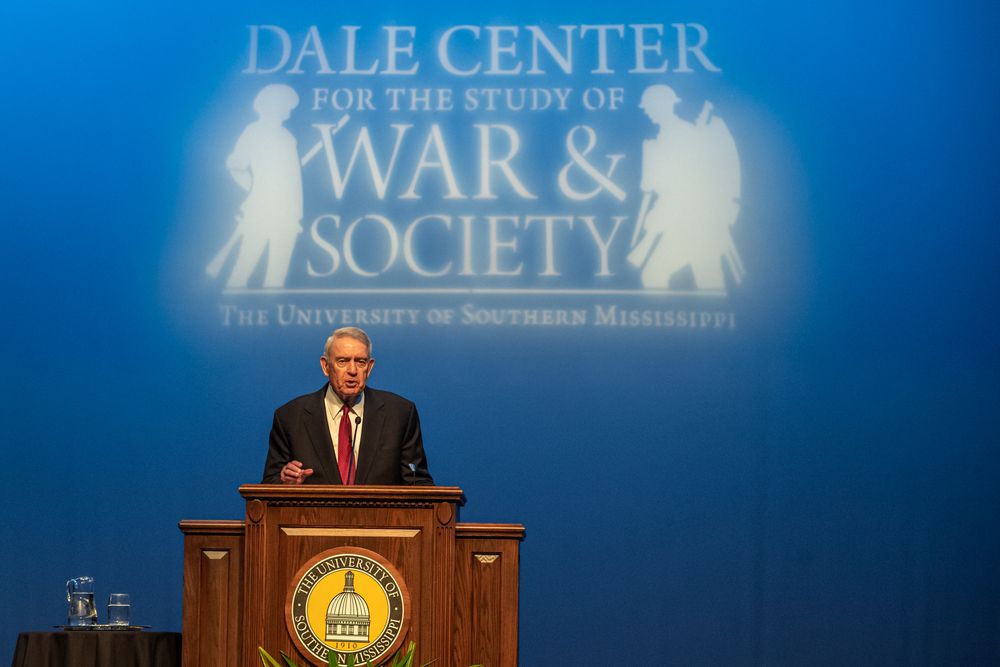 "Veteran newsman Dan Rather knows a thing or two because he’s seen a thing or two, to borrow a line from a popular television commercial – and so much, much more.

Rather, who served 24 years as anchor for the CBS Evening News after succeeding the famed Walter Cronkite, shared what he’s seen and knows from a career in journalism that spans more than six decades, when he gave the Lt. Col. John H. Dale Lecture in International Security and Global Policy Sept. 12 at Hattiesburg’s Saenger Theatre. The event was sponsored by The University of Southern Mississippi’s (USM) Dale Center for the Study of War & Society.

From the assassination of President Kennedy, the battlefields of the Vietnam War, the moon landing, Watergate, the Cold War, the 9-11 terrorist attacks and military interventions that followed in Iraq and Afghanistan, Rather expressed his gratitude for a career as “an eyewitness,” reporting on world events, inspired by his early journalism idols Edward R. Murrow, Eric Sevareid, and Cronkite.

“By the grace of God, I’ve been able to do that,” the 87-year-old Rather said of his work, which continues now with the media company he founded, News and Guts.

As a news correspondent covering the Vietnam War, he cited two experiences he reported on that left an indelible mark on him, including that of a 25-year old commander calling in a napalm strike in order to overtake an enemy position that he knew would result in the deaths of innocent men, women and children. The other was when he visited a hospital ship recovery room that was full of young soldiers, “heroes all,” severely wounded and many with fresh amputations, some calling for their mother - an experience he likened to being in one of “Dante’s hellish circles.”

Once you’ve seen those things - “the brutality and savagery of war,” Rather said - “you’re stripped of any notions” about war being glamourous.

“It’s impossible to convey the confusion and chaos of the battlefield, the brutality and savagery of war, unless you’ve fought in it or been an eyewitness to it,” he said. “I had never experienced anything close to it before, and I hope never to again.”

Rather also reflected on the current political divisiveness in the U.S., saying that people around the globe are watching, and wondering “can we endure?” along with the pursuit of policies he believes, seemingly indicating a retreat from our role of major player on the global political stage and as an advocate for, and example of, participatory democracy in a world that “needs us now more than ever.”

“Would we turn out a light that has been, for so many, a beacon of hope?” Rather asked, pointing to the American legacy of advancements in science, research, global economic development and outreach, world peace while also leading the way to victory in the fight against tyranny in World Wars I and II, among other achievements.

He called for Americans to stay grounded in a spirit of optimism about the future and good will toward others, and said he’s devoting his remaining active professional years to “inspiring others to love our country” because “our greatest strengths are our people and our ideals,” he said, “not our tanks and bombs.”

“If each of us does our part, stays steady and refutes the voices of distrust and division,” America will prevail, Rather said, “Because we’ve seen what we can do when we stay united.”

For more information on the 2019 Dale Distinguished Lecture and the speaker, please CLICK HERE.

"Winning the war on terror and advancing democratic ideals around the world cannot happen on the cheap or with quick fixes, but rather with a sustained commitment to those goals and implementation of sustainable strategies with global partners."

That was the assessment given by retired Army Gen. David Petraeus, former commander of the Surge in Iraq and U.S. Central Command and former director of the Central Intelligence Agency (CIA), of how America needs to approach foreign policy goals going forward in his 2017 Lt. Col. John H. Dale Distinguished Lecture in International Security and Global Policy, given Sept. 26 at the historic Saenger Theater in downtown Hattiesburg.

The event was presented by The University of Southern Mississippi’s Dale Center for the Study of War & Society.

“You can’t just drone strike and Delta Force your way to victory” against the Islamic State and Al Qaeda, Petraeus said, emphasizing that the way to turn the tide against terrorism, especially in the Middle East and North Africa, will be for America to commit to what he believes is a “generational” struggle against extremists exploiting leadership vacuums in “ungoverned spaces.”

The U.S. and its allies have to recognize that in the Middle East a “What happens in Vegas, stays in Vegas” mindset won’t work, as the problems there inevitable spread far beyond that region. “What happens doesn’t stay there,” Petraeus said. “You have to do something. And in most cases, the U.S. has to lead,” while working with allies and citizens to transition nations crippled by terrorism to security and stability.

In the decade that followed the Sept. 11, 2001, terrorist attacks on the U.S., Petraeus commanded coalition forces in Iraq and Afghanistan, as well as in the greater Middle East and Central Asia. After his retirement from the military, Petraeus served as director of the CIA from 2011 to 2012.  He is now a partner in a global investment firm and chairman of the firm’s Global Institute, and remains engaged in U.S. foreign policy and international security issues as a visiting professor at several universities and a frequent media contributor on security topics.

Petraeus also said he’s encouraged, despite rhetoric from the 2016 U.S. presidential campaign, that President Trump shows signs of embracing America’s longtime role as a global leader and mainstay of post-WWII institutions such as NATO. He praised the president for choosing former military colleagues with whom Petraeus was privileged to serve in Iraq and Afghanistan, including James Mattis (Secretary of Defense), H.R. McMaster (National Security Advisor) and John Kelly (Chief of Staff) for prominent roles in his administration.

Dr. Heather Stur, a USM associate professor of history and a Dale Center Fellow, said "Gen. Petraeus is one of the architects of 21st century U.S. foreign policy and military strategy, and we in the Dale Center are so proud to have been able to bring him here to speak with our students and the broader community about the wars in Iraq and Afghanistan, and issues of international security that remain crucial concerns in our world today." 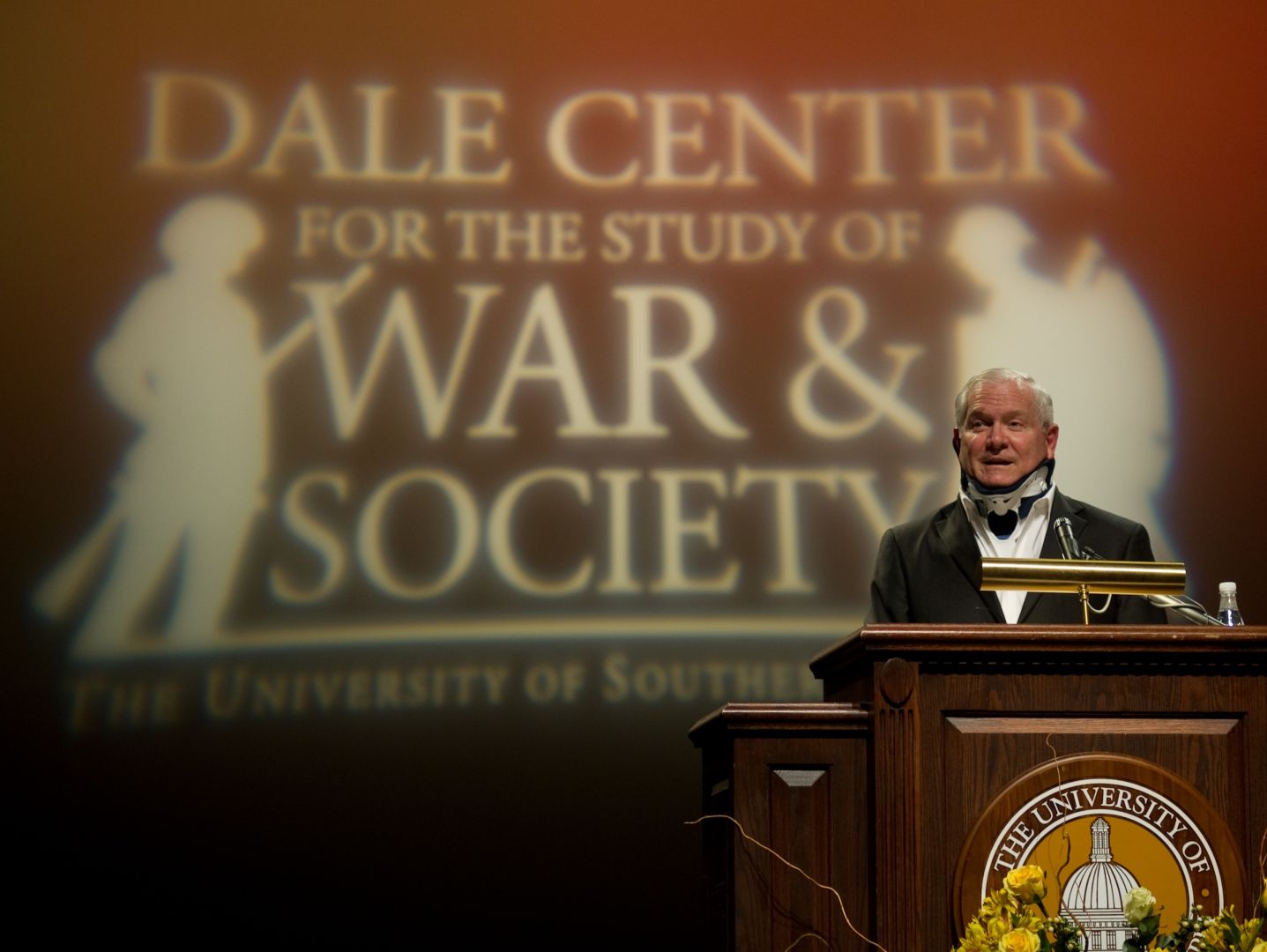