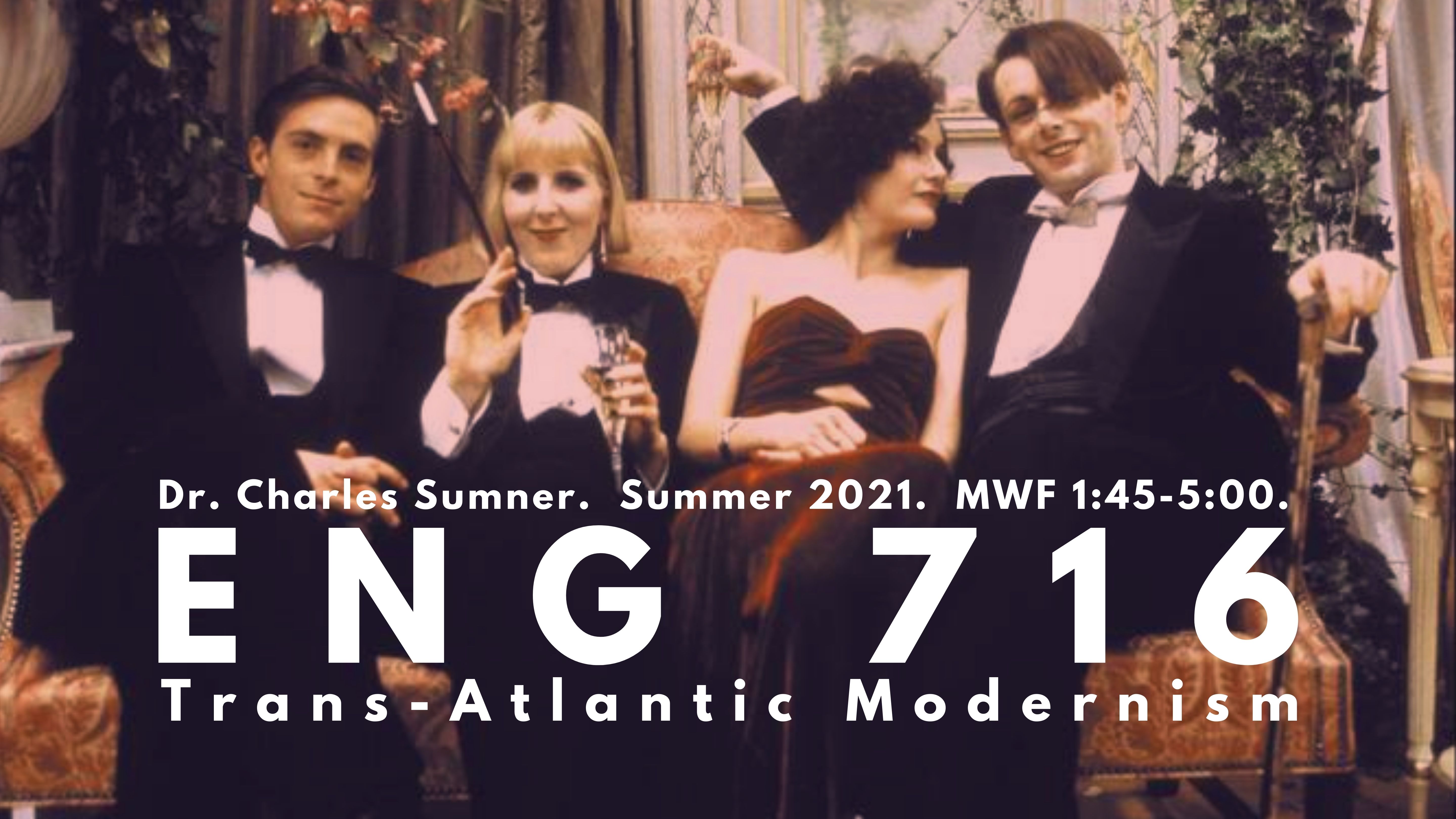 This course will provide a broad overview of modernism while simultaneously considering the ideological and aesthetic interests that bound writers together in specific fields of influence. The semester is compact, but we will come away with three distinct stories we might tell about – or narrative threads we might identify in – British and American literary modernism.  This structure should be particularly helpful for those prepping for comprehensive exams, but anyone curious about what makes this period vibrant and unique is of course welcome. 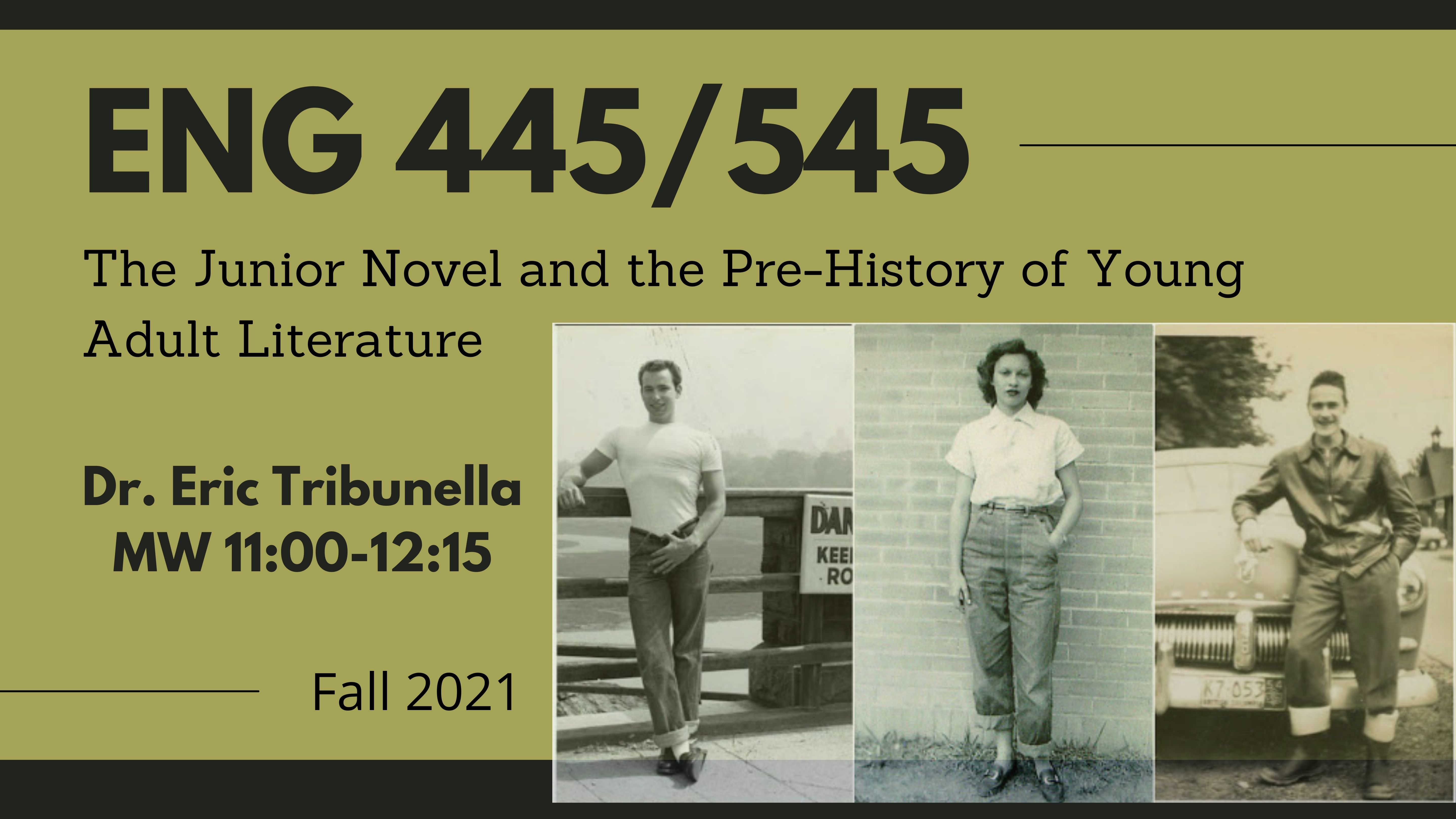 The Junior Novel and the Pre-History of Young Adult Literature

Before the development of Young Adult (YA) literature in the late 1960s, the so-called "junior novel" was written for and marketed to young people who were thought to have outgrown children's books and to be looking for alternatives to adult fiction.  The standard history of YA literature suggests that it offers grittier and more sophisticated fare than its predecessor, while the junior novel tends to be dismissed as hokey and benign.  We will reconsider this history of YA literature by reading a selection of junior novels and noting the complex ways they represent American youth culture, placing these works in conversation with the history of adolescence and the American teenager, and concluding with two landmark novels that represent the turn to contemporary YA fiction.  Readings will include junior novels of different genres: adventure, historical fiction, romance, science fiction, the career novel, and the sports story.

Possible titles may include: 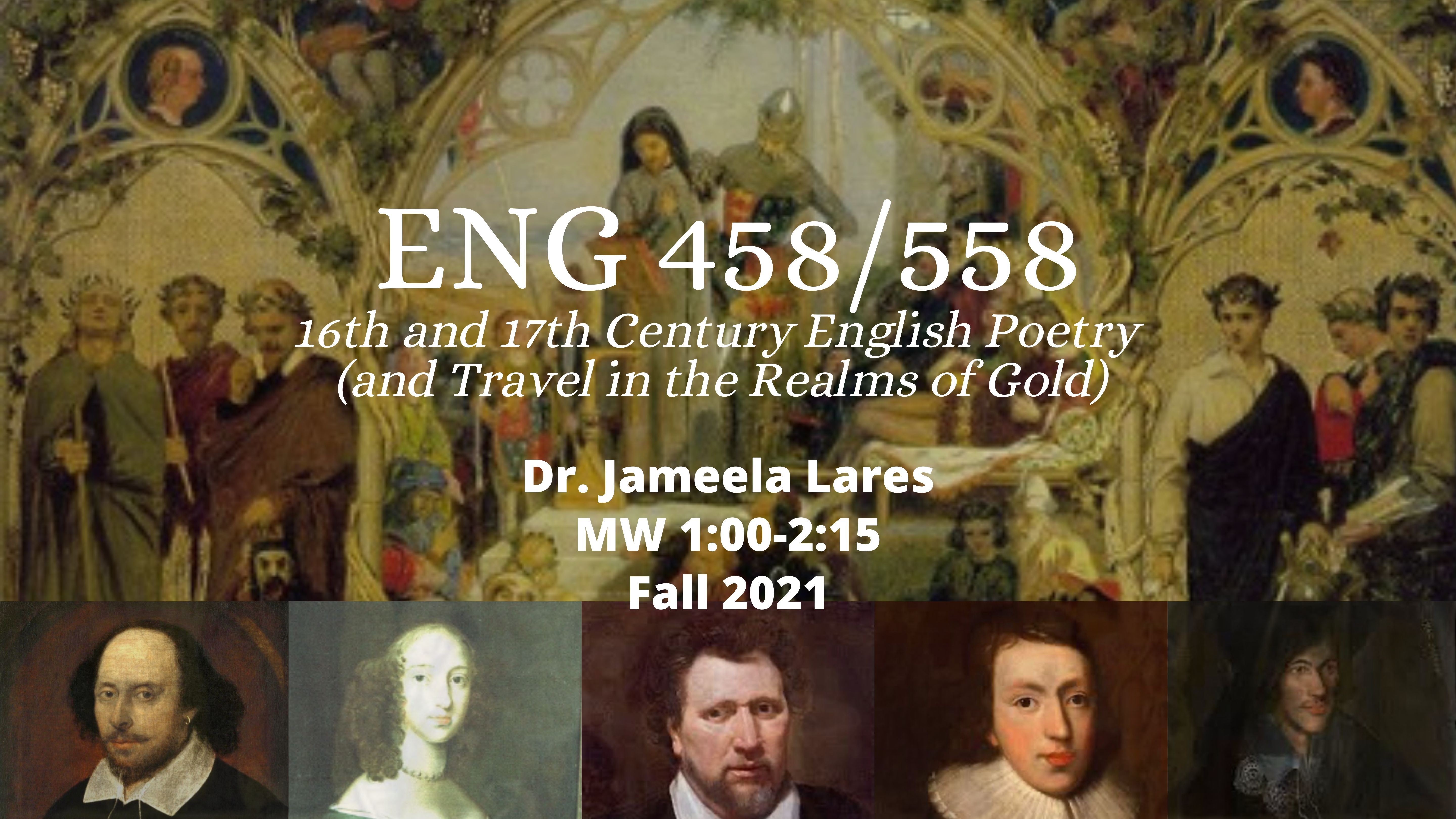 The sixteenth and seventeenth centuries were remarkable for English poetry. This period was the Renaissance, the age of such poets as Wyatt, Surrey, Spenser, the Philip and Mary Sidney, Wroth, Shakespeare; Donne, Herbert, and other metaphysicals; Cavendish, Philips, and Milton. Our seminar will look at as many poets and forms as possible, along with key Renaissance ideas that inform the poetry. In these two centuries, English was coming into its own as a fully functioning language while English poets were nativizing foreign texts, meters, and forms, so we will also be looking at such translations as Chapman’s Homer that so dazzled John Keats.

Requirements: Read, post regularly on the discussion board, and participate in class discussions, present orally on an English Renaissance poet, teach a class session or workshop on a poet, form, or topic; write two short poems in a Renaissance form or one longer one, and write a seminar paper on a topic related to the course but of particular interest to the student.

Graduate seminar in history and use of poetic forms.

Students will reflect collectively on how the range of poetic forms may or may not be pertinent to contemporary poetry. 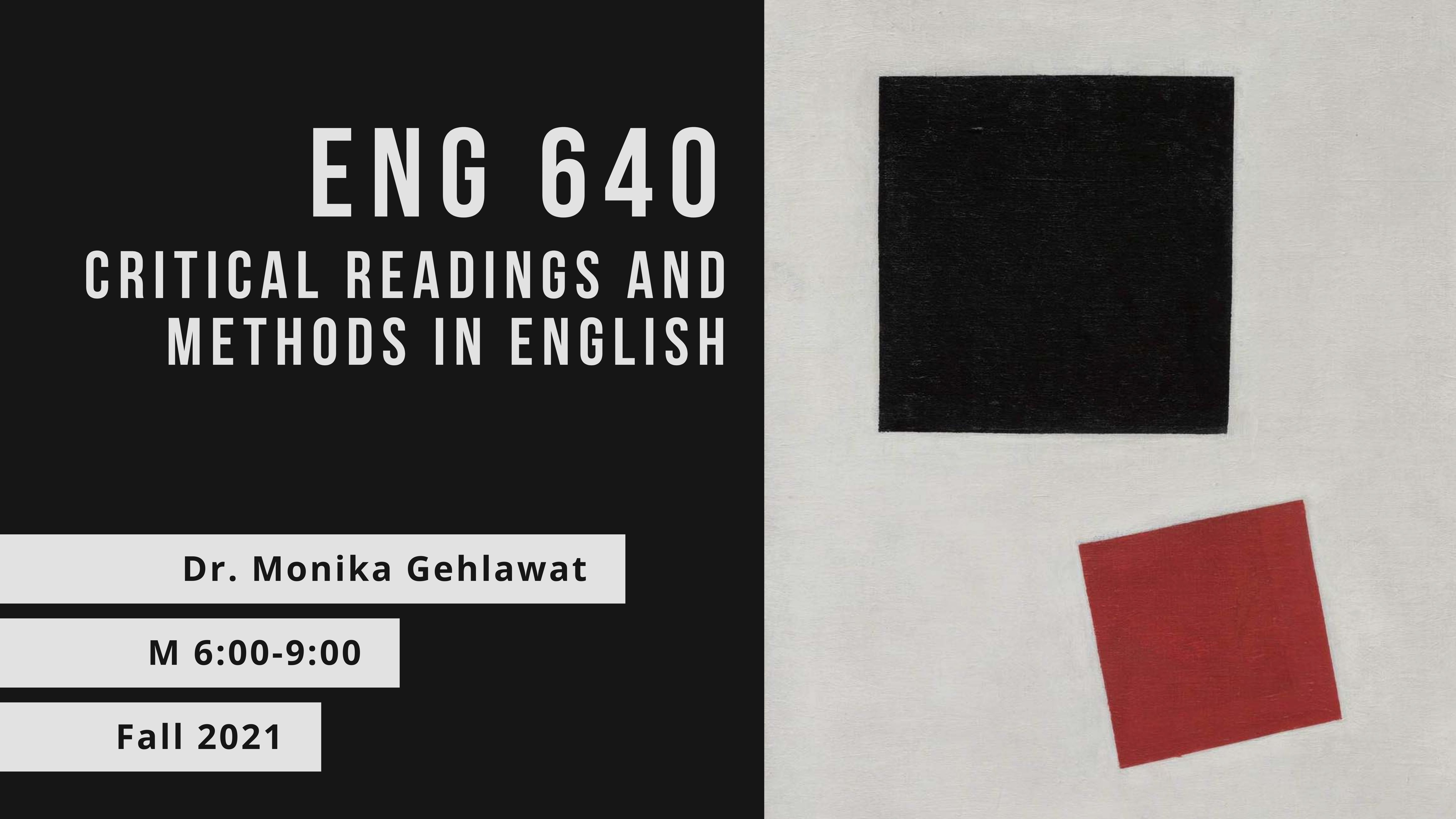 Critical Readings and Methods in English

This course is designed to introduce or review the methods of research in literary studies, the conventions of scholarly conversations about literary works, the critical approaches to literary analysis, and the components and mechanics of literary-critical essays. Together we will read a novel and cultivate hermeneutic practices that include reading “against the grain” and situating one’s own critical voice in relation to other scholars. We will also study a host of theoretical models like Marxism, Feminism, Psychoanalysis, and Ecocriticism, among others. Students will have the opportunity to write a final seminar paper on a primary text and theoretical model of their choice. 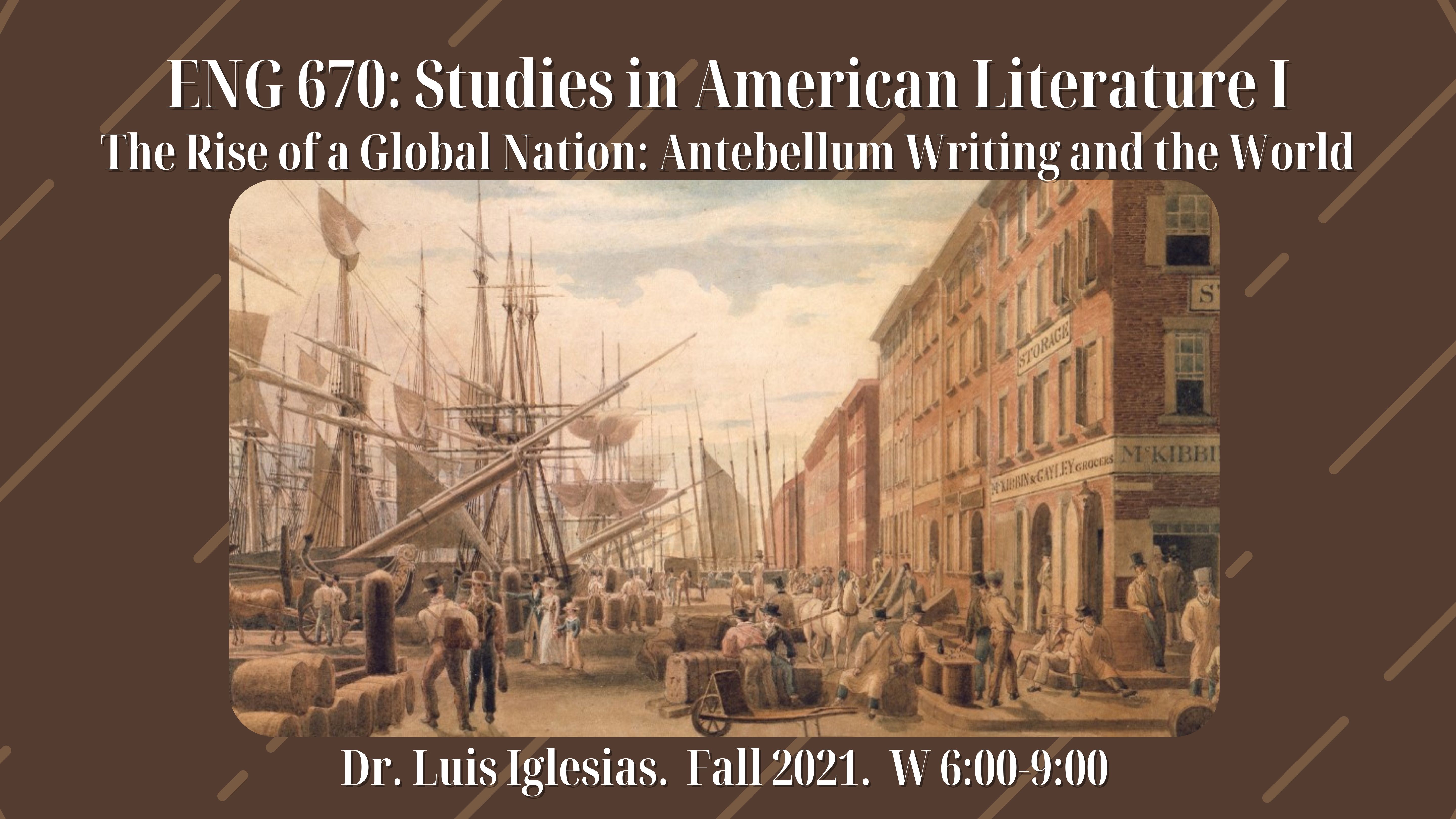 Studies in American Literature I

The Rise of a Global Nation: Antebellum Writing and the World

The over-riding attention given to Early Republic and Antebellum writings and authors has focused primarily on a nationalist narrative, underwritten by the twin foci of American Exceptionalism and Manifest Destiny. This class will take a different tack and examine the overlooked internationalist perspective of the period’s writers and the texts they produced. Self-consciously provincial yet economically ambitious, both writers and the nation looked east and south as they sought a hemispheric and transatlantic presence in the formative and antebellum years of the nation. We will explore novels, travel narratives, and essays finding traces of what was already a global imaginary in the early 19th century, rewriting the narrative of isolationism that has long framed the nation’s illusory political ethos.

The Water-Witch: or, The Skimmer of the Seas (1830), James Fenimore Cooper

To Cuba and Back, A Vacation Voyage (1859), Richard Henry Dana

The Marble Faun: Or, The Romance of Monte Beni (1860), Nathaniel Hawthorne 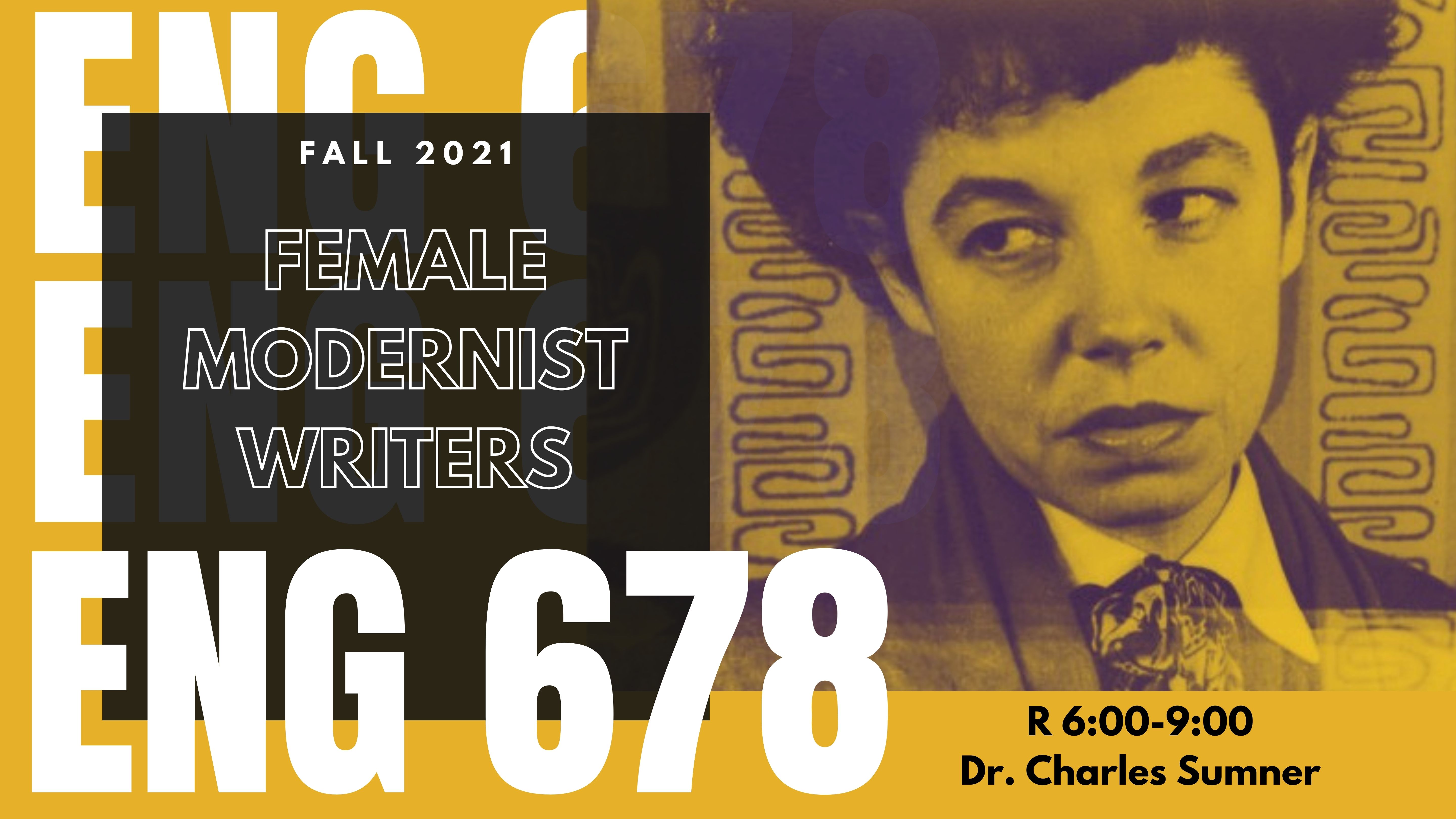 Topics in Writing by Women

This class will examine female modernists who develop formal innovations to express the optimism, as well as to highlight the challenges, that accompany the growing social, financial, and political independence of women in the first half of the twentieth century.  Particularly exciting here is the opportunity to read the work of woefully neglected writers like Mary Butts, Jane Bowles, and Kay Boyle, but we will also read more canonical writers like Jean Rhys, Rebecca West, Virginia Woolf, Mina Loy, and Djuna Barnes.

Practicum in the Theory and Teaching of Composition

This course surveys major theories and practices in the teaching of writing. One of the primary goals of this course is to help teachers better understand composition practices and develop a pedagogical identity that will lead to successful writing classes. This course will rely on critical examination and reflection as we discuss lesson planning, scaffolding activities, opportunities and challenges of classroom teaching, and pedagogical strategies. Through this class, you will be able to explain to your students, peers, future employers, and colleagues why you have chosen specific pedagogies and practices to support student learning and engagement. 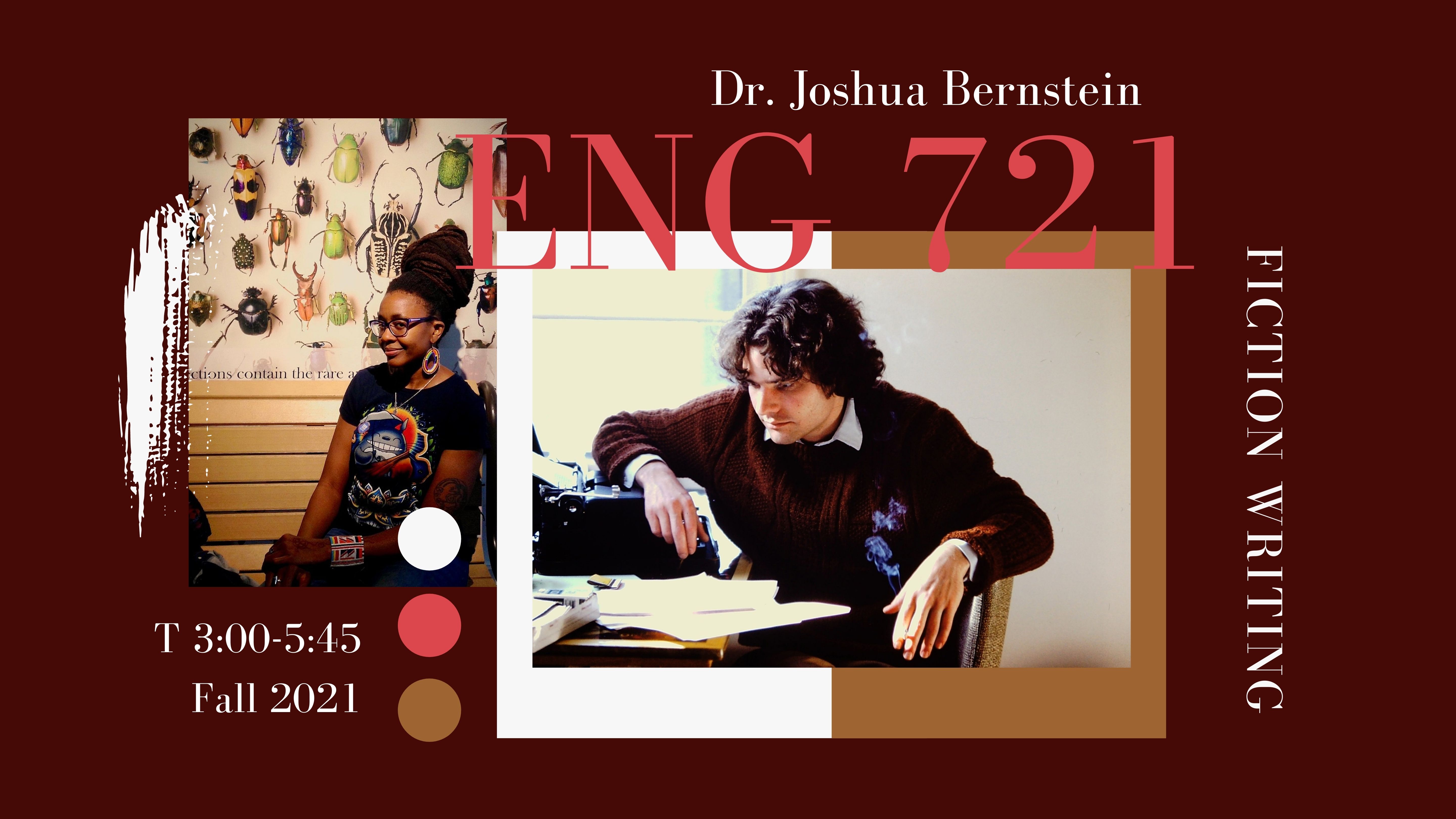 “Write what you know,” goes the old adage. But what happens when you don’t? Or, as Bret Anthony Johnston, the writer, asked somewhat cynically in a 2011 essay on the topic: “Was Toni Morrison a slave? Did she ever slit a child’s throat? Was Nabokov, in light of his ‘fancy prose style,’ a murderer? Has Haruki Murakami ever constructed a flute from the souls of cats?” We’ll focus this term on fiction-writing that diverges from the writer’s experience and moves outside the realm of the familiar to that which is more imagined and new. That doesn’t mean we’ll have elves or DeLorean time machines—though those are welcome, too. But it does mean we’ll push ourselves as writers to conjure new settings and themes, even at the risk of sounding implausible. At the same time, we’ll ask what the risks of such imagining are (cultural appropriation, inauthenticity, gratuitous invention, and more). Likely readings will include Denis Johnson’s Fiskadoro, Nnedi Okorafor’s Lagoon, Cormac McCarthy’s The Road, and shorter works by J. Robert Lennon, Cara Blue Adams, and Anne Valente, among others.

In this course, you will share your own short stories and novel excerpts in a workshop setting. We’ll also devote some time to informal writing, with in-class writing exercises, both solo and collaborative. 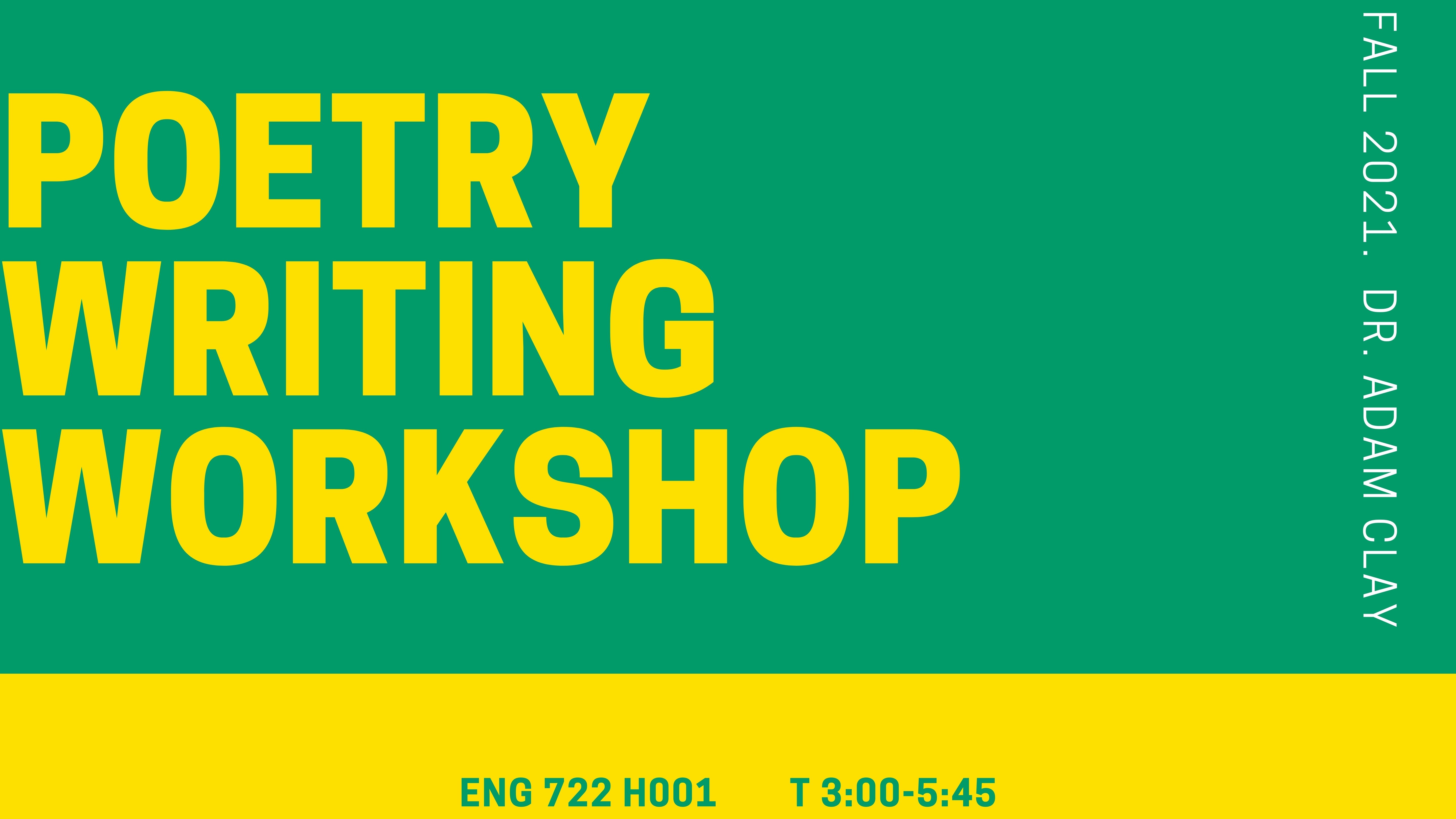 ENG 722 (Graduate Poetry Seminar) will challenge traditional notions of the creative writing workshop. Using Felicia Rose Chavez’s The Anti-Racist Writing Workshop: How to Decolonize the Creative Classroom, we’ll discuss how we can overhaul the creative writing workshop as both students and teachers. Each week we’ll discuss student work and consciously approach the poems in different ways, including (but not limited to): critiquing the poems anonymously, responding to specific writer concerns/questions through critiques, and discussing work from two students simultaneously to determine how radically different poems can speak to one another in meaningful ways. The end goal will be to shift away from product and emphasize process through reflection and consideration of our attitudes, assumptions, beliefs, and approaches within the creative writing workshop.

Critical Approaches to Race and Ethnicity

This seminar explores how the notion of race has historically shaped not only political systems and public policies across the world, but also the most intimate of spaces and interactions—homes, a singular look. The body, for many, bears the burden of the quest to define race itself. The racialized body is often a profoundly equivocal one, overdetermined in its prospects, undetermined in its possibilities. Such tensions grip writers and thinkers like Duiker, Baldwin, Morrison, Gay, Iceberg Slim, Fanon, Freire, Anzaldúa, and Spivak, and their pause before the original question forms the basis of our inquiry. 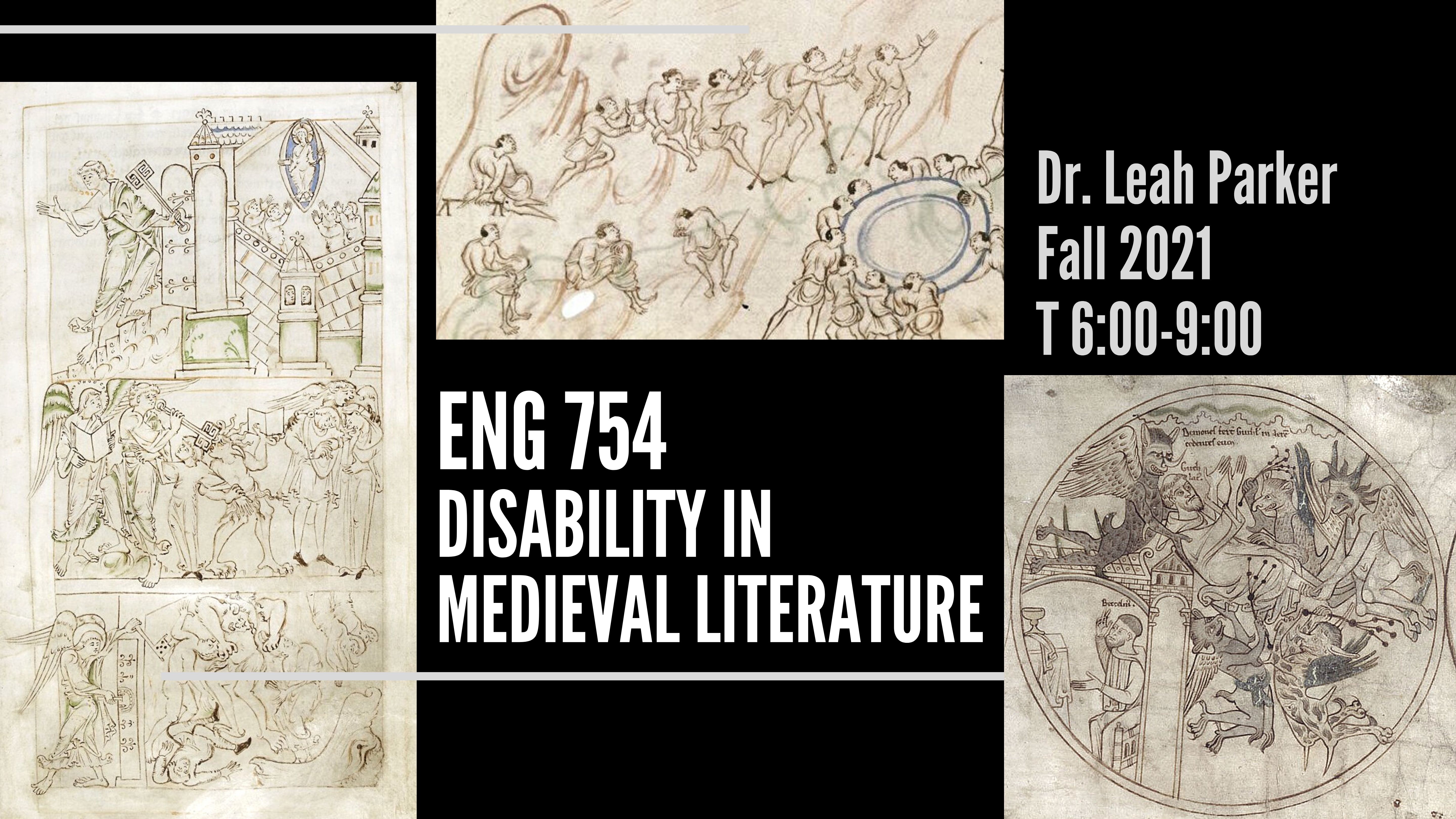 *fulfills British literature to 1800 or theory

In this seminar, graduate students will (1) grapple with methods and models in critical disability studies, and (2) explore medieval literature, spanning the 5th–15th centuries and ranging across Western European literary traditions. Because both medieval studies and disability studies are interdisciplinary fields, this seminar will also consider interdisciplinary approaches that engage with archaeology, history of medicine, phenomenology of religion, legal history, and histories of the body.

Students will read Middle English texts in the original language (with guidance!) and read translations of Latin, Old English, Old Norse, French, and Spanish. The goal of the course will be not only to practice creating compelling analyses of medieval literature—addressing both historical contexts and matters of translation—but also to prepare graduate students to engage in the critical work of disability studies, whether as an area of specialty or as part of a broader research agenda.

Readings are likely to include:

· As well as legal codes, saints’ lives, and medical records.1 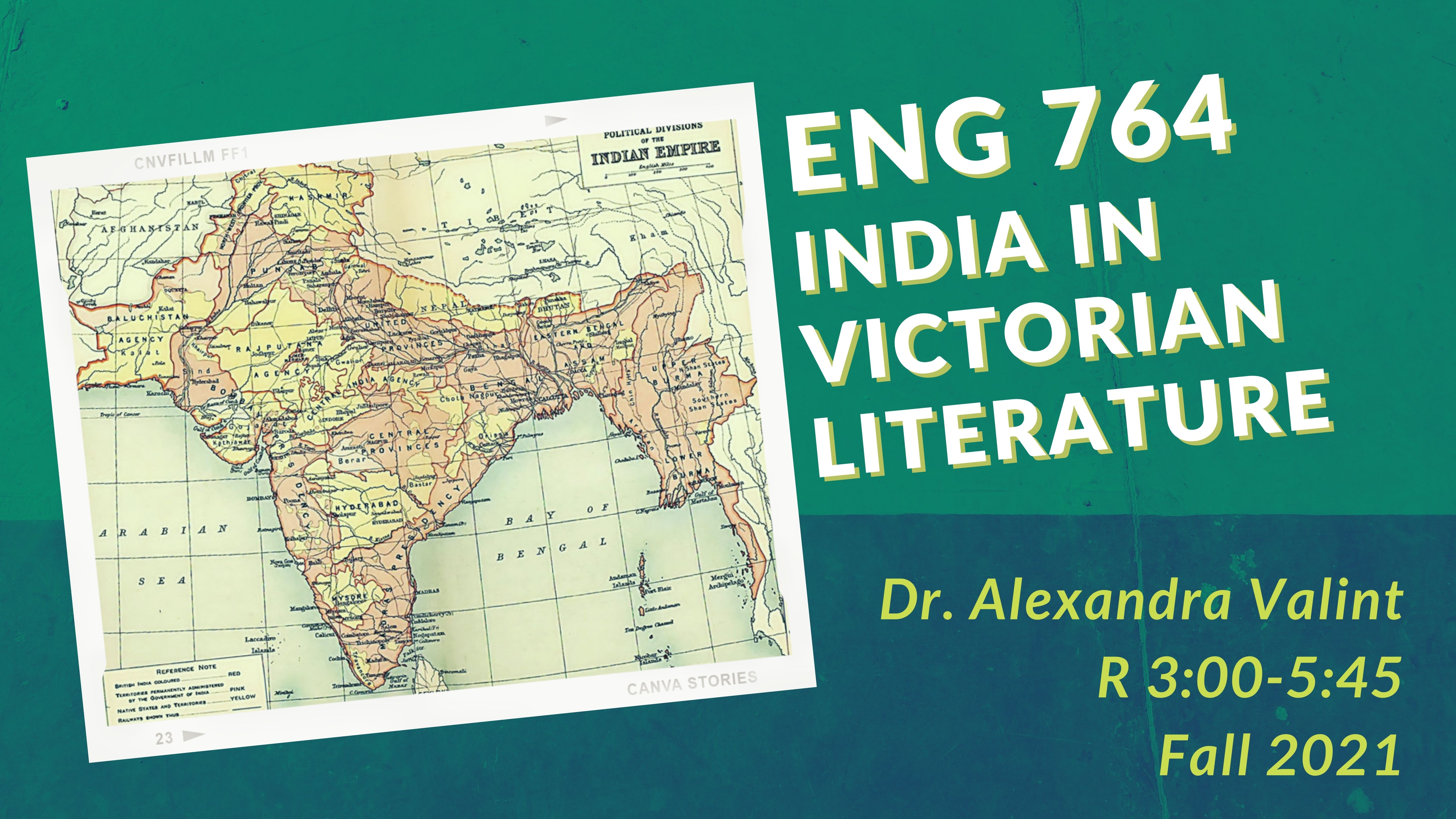 This course centers on the representation of India in literature published during the Victorian period by both British and Indian authors. Our reading list will be generically diverse and include novels, short stories, poetry, and drama; our texts will be either set in India, engage with the idea of India, or feature Indian characters. Our investigation into this rich and varied literature will be grounded in historical context and postcolonial theory.

India, an official British colony from 1858 to 1947, was considered by most Victorians to be the jewel of Britain’s imperial crown. Queen Victoria was thrilled to be named Empress of India in 1876. Commodities from India—indigo, opium, fabrics—were eagerly bought in Britain, and the British travelled to India to seek their fortune or serve in government positions. Crucially, the colonization of India was built upon violence and oppression, particularly the brutal repression of the Indian Rebellion of 1857 (which went into 1858).

British authors on our reading list will include Wilkie Collins, Dinah Mulock Craik, Charles Dickens, Arthur Conan Doyle, Rudyard Kipling, and Flora Annie Steel. Wilkie Collins’s The Moonstone tracks the international journey of the potentially cursed titular gem; the stone invokes the real-life Koh-I-Noor diamond, which came to Queen Victoria’s possession after being plundered from India (it is still part of the Crown Jewels today). Flora Annie Steel lived in India for decades, and her novel On the Face of the Waters reconstructs the horrific events of 1857 from British and Indian viewpoints. Zillah, the mixed-race heroine of Dinah Mulock Craik’s The Half-Caste, navigates the marriage market after being sent to England from her home in India. We will also read a significant number of texts by Indian authors—including Bankimchandra Chattopadhyay, Toru Dutt, Sarojini Naidu, Rabindranath Tagore—to analyze how they represent India and the reality of British colonization.

Throughout our readings, we will interrogate how authors construct both India and Britain (and relatedly, Indianness and Britishness); how authors represent the motivations, workings, and effects of colonization; how authors imagine the relationship between India and Britain; and how their works express (and sometimes complicate) prejudices, stereotypes, and ideologies.