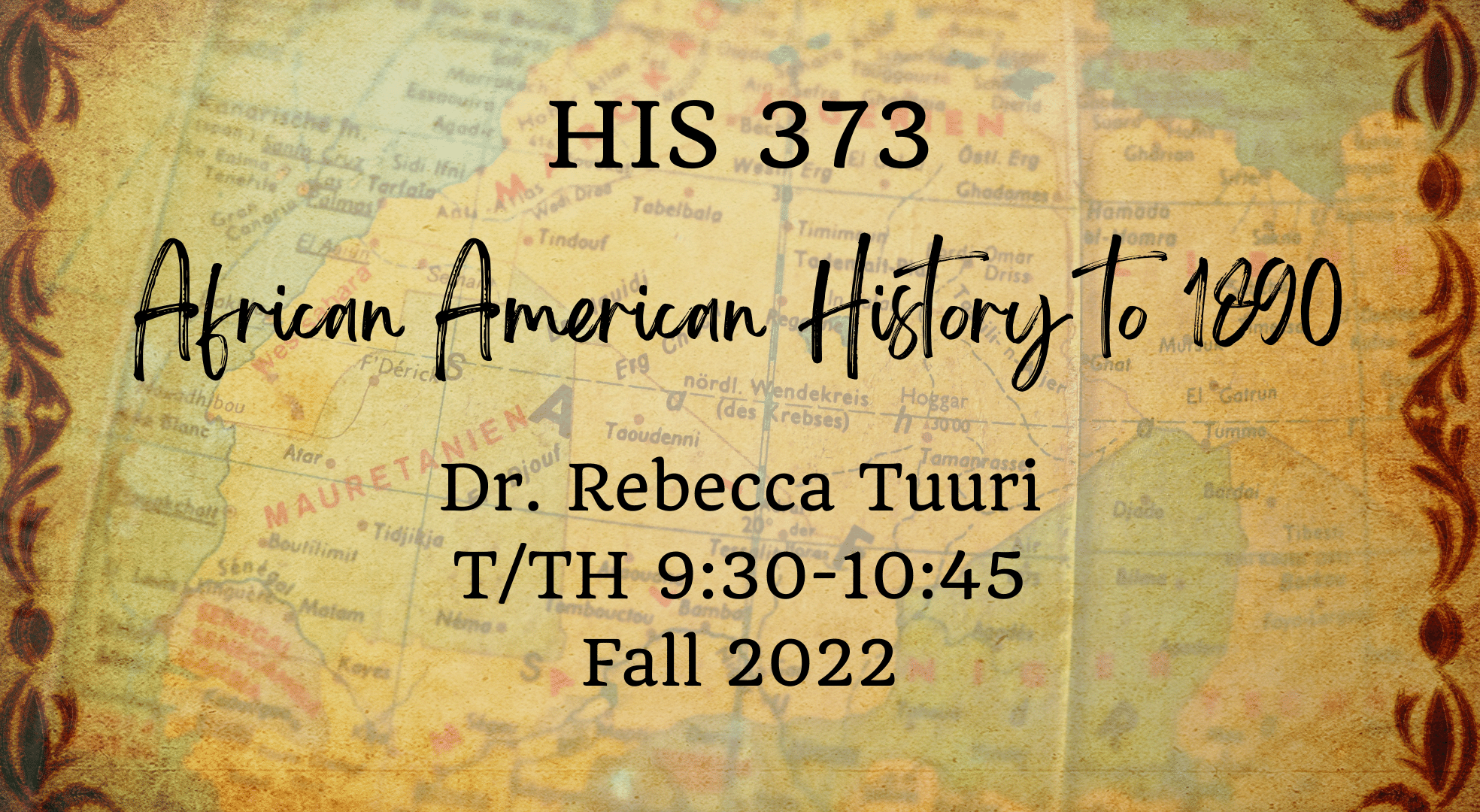 This is a course that encompasses the history of African Americans from the beginning of slavery in the Americas through the origins of Jim Crow. It is a history of great perseverance and courage under sometimes seemingly impossible odds. This course will not only provide students with an overview of significant events, movements, and people from the beginning of the Atlantic Slave Trade through Reconstruction, but equally importantly it will illuminate cultural formation and efforts towards freedom and equality within enslaved and free African American communities in North America. We will learn about this history by reading scholarly work about slavery, but also the words of those people—including the enslaved—who lived during this time period. We will pay extra attention to how larger American society, especially that of white America, has manipulated images and ideas about African Americans from the past to the present. Finally, we will consider how “memory,” literacy, and access to archival sources has affected American and African American historiography. 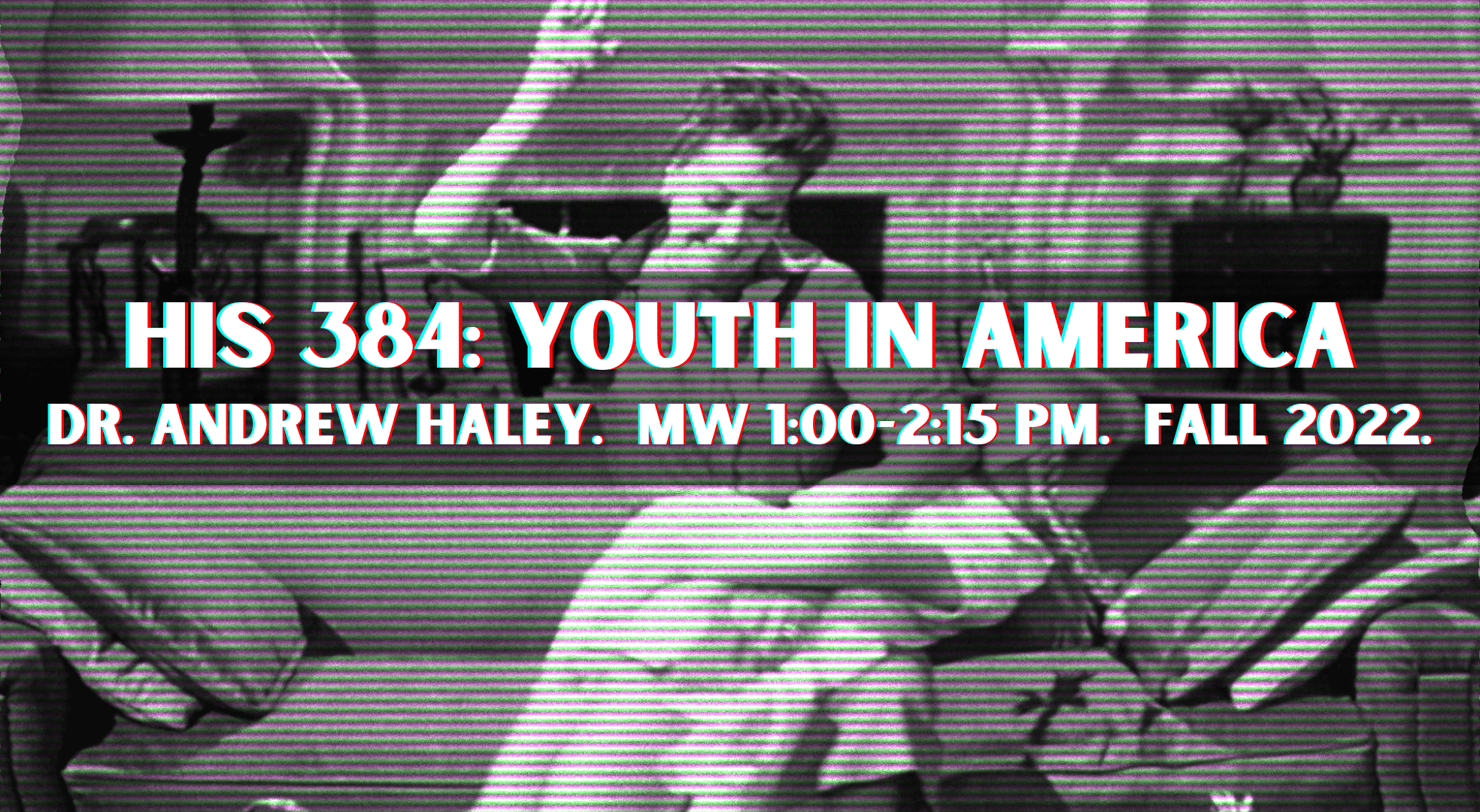 Whether they were knee-high to a toad (the original 1814 idiom) or to a grasshopper, children have been at the very center of the American experience. They color the way their parents view the world and, through their own work, play, and politics, have shaped American history. This class examines the role that kids--from infants to teenagers--have played in the making of the United States from the founding of the nation to the present day. Topics addressed will include parental anxiety about child raising, child labor, toys, babysitting, children and politics, and children in the mass media.

Students taking the class will read Miriam Forman-Brunell’s Babysitter, Jacobson’s Raising Consumers, and Ritterhouse’s Growing Up Jim Crow as well as a broad selection of historical and primary-source writings. You will also have the opportunity to view some landmark films that provide a window into the life of children. Class participation is essential. Throughout the semester there will be several in-class quizzes. In addition, you are required to write a paper incorporating primary source research. 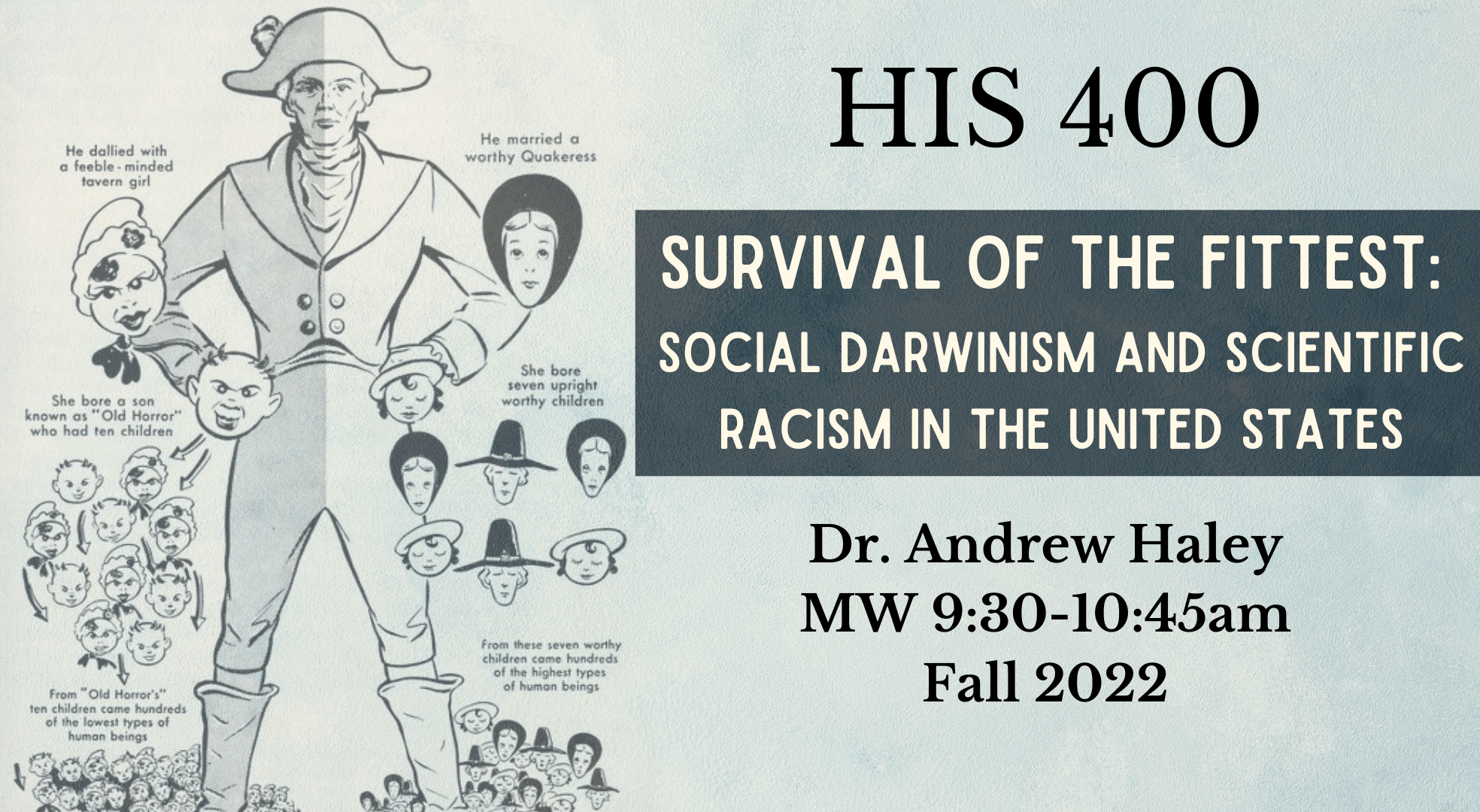 Survival of the Fittest: Social Darwinism and Scientific Racism in the United States
Dr. Andrew P. Haley
M/W 9:30-10:45am LAB 323

“We have unmistakable proof that throughout all past time, there has been a ceaseless devouring of the weak by the strong.” Hebert Spencer, First Principles, 1862

In the late nineteenth century, wealthy Americans justified their extravagant lifestyles with a pull-yourself-up-by-the-bootstrap philosophy derived from a misreading of Charles Darwin’s Origin of the Species. Wealth, status, and success, these Americans argued, was evidence of hereditary racial superiority. Embraced by American scientists, social Darwinism created a hierarchy of human evolution that justified racism, sexism and ethnic discrimination. In this course, we will study and discuss the founding ideas of social Darwinism and its consequences: scientific racism, the eugenics movement, the celebration of rugged individualism, immigration restrictions, and the racial stereotyping that took place during the World Wars.

History 400 is a capstone course required for graduation as a History major. During the first half of the course, we will examine the science and culture of social Darwinism in a discussion-based seminar class. Students will read selections from turn-of-the-century works by Charles Darwin and Herbert Spencer as well as the cultural evidence of social Darwinism and scientific racism found in novels, children’s literature, the popular press, comics, and film. 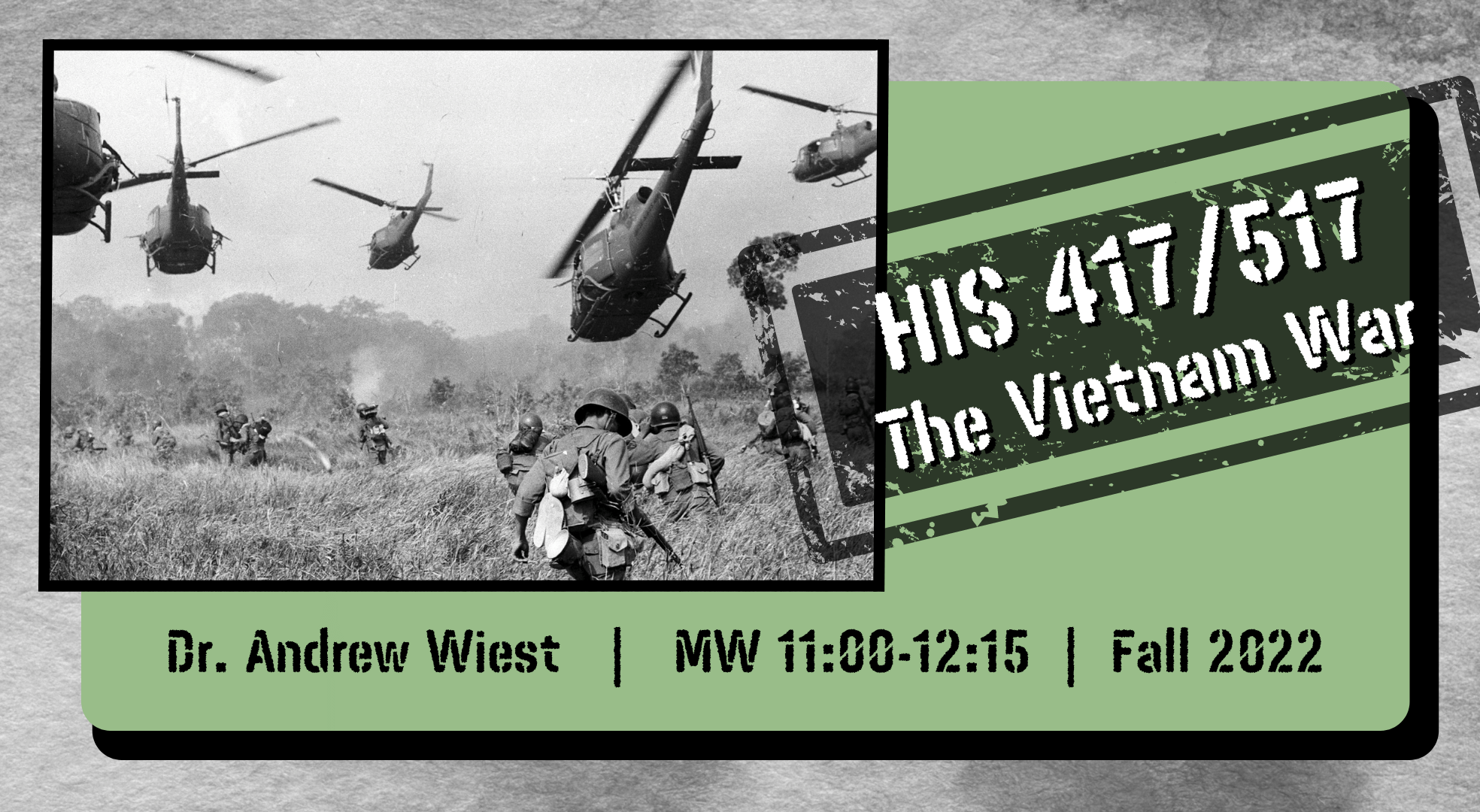 This course uses a multi-disciplinary approach to investigate the Vietnam War, arguably the most important event, or series of events, in the history of 20th century America. The United States entered the conflict unified behind the doctrine of the Cold War. Idealistic American youth answered the call defend their nation against Communist aggression. But by the end of the war America had suffered its first ever defeat, and its society was in turmoil. America would never be the same, or as innocent, ever again. Over 3 million Americans served in Vietnam, and over 58,000 lost their lives there in a unique national tragedy. In Vietnam itself over 2.4 million people perished in a brutal civil war that impacted society there in a way few outsiders can understand.

The course will investigate Vietnamese culture, the antecedents to the war, the Fist Indochina War, the military prosecution of the American war in Vietnam, the political battles on the American home front and the ramifications of the US defeat in Vietnam. The course will also focus on less-known topics such as Post-Traumatic Stress Disorder, the music of the era, theories of counterinsurgency and wartime literature. The course is enriched by the participation of several Vietnam veterans. Simply put there is no better way to learn of Vietnam than through the eyes of those who participated in the conflict. Past class participants have included: Marines, helicopter pilots, nurses, CIA operatives, a contentious objector, medics, a Phoenix Program operative, South and North Vietnamese veterans, a member of the Weather Underground, pilots, POWs, a SOG operative and countless “grunts.”

Course readings will include: Wiest – The Boys of ’67: Charlie Company’s War in Vietnam; Jonathan Shay, Achilles in Vietnam; Stur -- Beyond Combat: Women and Gender in the Vietnam War Era; and a book of their choice (in consultation with the instructor) that best fits their historical interest areas. 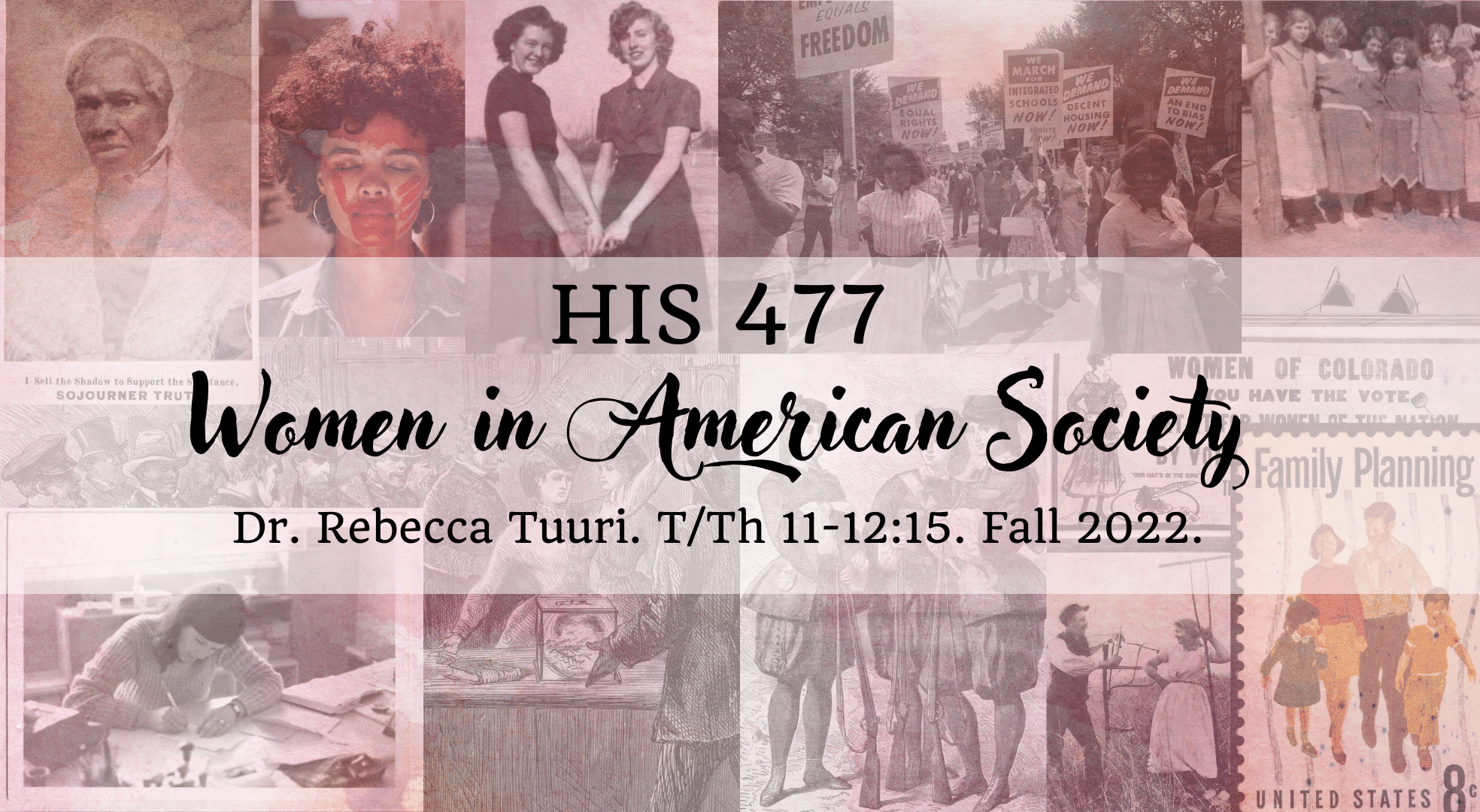 This course will focus specifically on women who have lived in the region that is now the modern United States from pre-European contact to the present. Topics will include work, family, religion, war, sexuality, organizations, and feminism. We will study women’s activism, their everyday lives, the changing concepts of women’s proper “place” in society, and the relationship of women to gender and sex. We will consider how differences across race, class, ethnicity, and region have affected women’s status and women’s interactions with one another. Finally, we will explore the development and evolution of the historical subfield of women’s history and its impact on the historical profession. 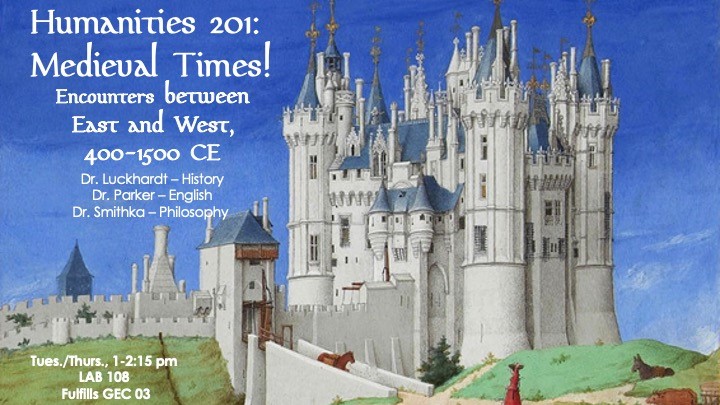 Course fulfills GEC 03 requirement. In this course, we examine two distinct global cultures of enduring significance from the perspective of history, literature, philosophy, and religion. Since the material available to us is so vast, we will focus on themes in two distinct global (Western and nonWestern) cultural contexts. The two cultures to be focused on this semester are medieval Europe and the medieval Middle East, ca. 400-1500 CE. The three themes are:

To focus on these themes, we will be reading primary sources – that is, texts produced in the Middle Ages. Students will read and interpret these primary sources, critically reflect on them, and compare and contrast these two societies and their norms with each other and with contemporary American culture.