Past Research with Northern Cardinals

Some of the undergraduate work has included; work by Kaylee Gentry (see current research section) looking to see if overwintering adult cardinals harbored the avian malarial parasite in their red blood cells. 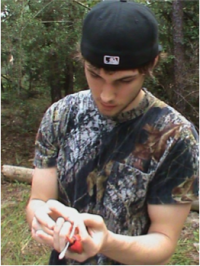 Avian malaria is a damaging disease to bird populations and it is unclear if it can overwinter inside its avian hosts.  Kaylee did not find any evidence of overwintering infections in the adult birds at Lake Thoreau.  Jeffrey Hooker (pictured at right) investigated something originally noted by doctoral student M. Susan DeVries; the production of testosterone by over-wintering cardinals.  The great majority of bird species do not have measurable circulating levels of testosterone during the non-breeding season, cardinals do.  Jeff’s work investigated whether there was a link with temperature in the non-breeding season and testosterone production; he found that overall temperature patterns influenced testosterone production (e.g., warmer winters correlated with higher levels of testosterone in cardinals assessed). 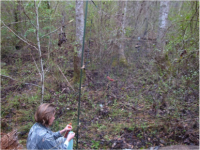 Susan’s dissertation research at Lake Thoreau investigated relationships between testosterone and behavior in Northern Cardinals.  During 2008-2012, she examined the interrelationships of testosterone, aggression, and parental behavior in cardinals at the Lake Thoreau Center.  Her research suggested that the links between testosterone and reproductive behavior differ for this species compared to the patterns observed in many other songbirds.  In cardinals both sexes have measurable levels of testosterone throughout the year.  While cardinals can be highly aggressive with one another, testosterone does not correlate with this aggression, unlike the typical pattern observed in many other vertebrate species.  Additionally male parental care behaviors seem impervious to the negative impacts of testosterone that is observed in many other bird species.  Cardinals are descended from a tropical ancestor and they are year-round in their territorial behavior, potentially this has impacted their unique testosterone profiles.  Thus far, this work has resulted in 4 peer reviewed publications, 8 public presentations (6 national conference, 2 international conference, 1 general public), and numerous outreach demonstrations for local high schools.

Caitlin’s thesis work at Lake Thoreau investigated the correlations between ornamentation and aggression shown over nest defense by female Northern Cardinals.  Caitlin compared both the bright red underwing coloration and the dark gray-black face mask coloration (e.g., plumage ornaments used to convey information) to how strongly females defended their nests against a simulated nest intruder (a stuffed model of a female cardinal).  Cardinals in other populations are known to ‘egg dump’ or opportunistically lay an egg in a neighboring cardinal’s nest; nest owners are very protective of their nests and will attack any stranger they see near it.  Caitlin found that there was no correlation between level of aggression shown and ornamentation, although female cardinals at Lake Thoreau were very aggressive to intruders.  Additionally no behavioral evidence was found of egg dumping in the population at Lake Thoreau.  Potentially the larger territories and greater abundance of appropriate nesting habitat (different from more northern populations studied in the past) does not select for the behavior of egg dumping and therefore may not select for the expression of an ornament to convey information about nest defense aggressiveness.