Center for Molecular and Cellular Biosciences

Research in Molecular and Cellular Biosciences 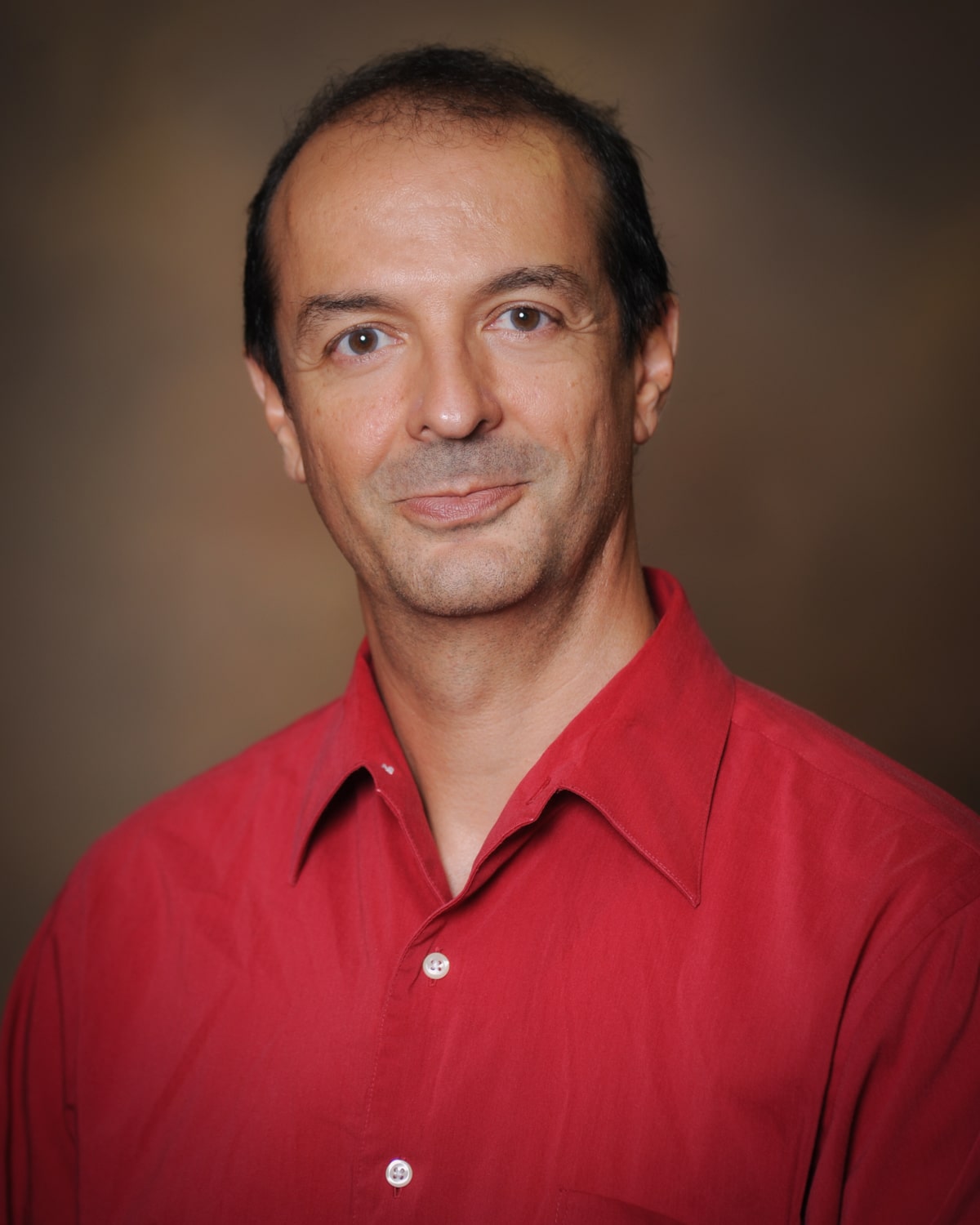 The treatment of AIDS patients with Highly Active Anti-Retroviral Therapy (HAART) has transformed the prognosis of an HIV infection from a once deadly illness to a chronic manageable disease.

HAART is a combination therapy of small molecule inhibitors that target essential viral enzyme of the HIV replication. However, the rapid development of HIV resistance to almost all currently used antiviral agents is a major clinical problem. In the absence of an effective vaccine there is an urgent need to continually develop new strategies against as yet unexploited targets.

My research focuses on understanding the fine molecular mechanisms of HIV replication. I use a combination of biochemistry, biophysics and ex vivo approaches to discover critical interactions (within the virion or between host and viral components) in order to devise novel molecular strategies capable of blocking viral replication. Newly found inhibitors emerging from these studies can also serve as powerful molecular probes to observe unknown aspects of viral biology which in turn will reveal new unexploited targets. I have discovered that pursuing these two research directions simultaneously (viral biochemistry and antiviral drug discovery) maximizes productivity in term of scientific breakthroughs.

My research has been continuously funded at the highest level by the National Institute of Health (NIH) since 2011. More recently, I have been awarded a very competitive R01 grant (the gold standard of biomedical research, about $1.8M) to continue my HIV research.

HIV-1 integrase (IN) is validated clinical target and is essential for viral replication. During the early steps of infection, tetrameric IN associates with two viral DNA ends and catalyzes their integration into the host chromosome.

A new class of allosteric IN inhibitors (ALLINIs) has been reported to inhibit enzyme function by promoting aberrant IN multimerization. Interestingly, in infected cells these compounds impaired both early and late stages of HIV-1 replication. In particular, the ALLINI-treated virions were found to display profound viral core morphologies defects similar to those observed with several replication-defective class II IN mutants. Collectively, these studies have suggested that in addition to its known catalytic function in early stage, IN also plays an essential and non-catalytic role during the late stage of HIV-1 replication.

We were recently able to discover that IN binds to several viral RNA (vRNA) elements and that ALLINIs strongly modulate these interactions in the virion. In addition, we observed that IN can bring these bound vRNA elements together suggesting a possible role in vRNA condensation.

The present application will test the following hypothesis: 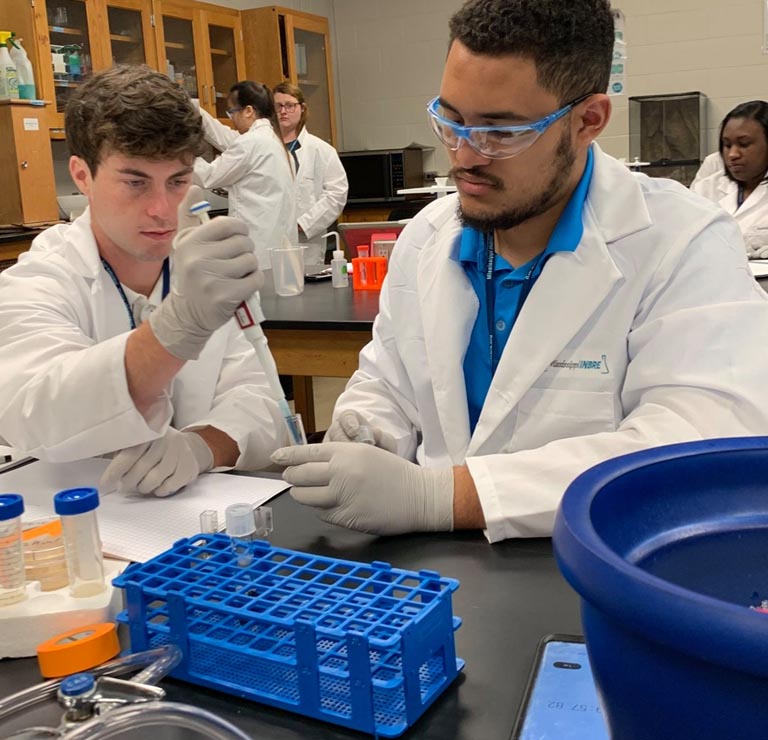 The Mississippi IDeA Network of Biomedical Research Excellence (MS INBRE) is a statewide network dedicated to enhancing the biomedical research infrastructure among all higher education institutions in Mississippi.

The overall goal of the network is to address health disparities and inequities by improving leadership and knowledge concerning biomedical research and to increase awareness of health disparities prevalent in Mississippi. With this goal in mind, MS INBRE has developed its activities around three scientific themes that are major impacts on Mississippians: cancer, infectious diseases, and obesity. Mississippi is ranked third lowest in the United States in terms of access to healthcare, primarily owing to the state’s poor economy and historically low investment in health care infrastructure. MS’s biomedical research infrastructure has lagged in comparison to other states, which creates a vicious cycle in which it is more difficult to make improvements in health care equality and availability. Mississippi is improving its health care and biomedical research infrastructure to improve the health of the population.

Project: Characterization and optimization of microbial preparation for the production of hydrogen gas from ecologically hazardous food waste.

Project: Dicer as a repressor of antiviral response in embryonic stem cells

Early embryogenesis is the most vulnerable stage in the life cycle of mammals. Embryonic stem cells (ESCs) in the uterus have a dedicated task of rapid cell proliferation for the organismal development, but they can be adversely affected by many environmental factors, such as infection and inflammation. Currently, we know little about how ESCs cope with stress conditions. The interferon (IFN) system is the central part of antiviral innate immunity in differentiated somatic cells.  We have recently demonstrated that ESCs are unable to express IFN, indicating that ESCs may not have a functional IFN-based antiviral mechanism.

This finding raises important questions about the rationale for ESCs to not have such a critical defense mechanism and how do ESCs deal with viral infection. Using a synthetic dsRNA-based virus-free system, we have unexpectedly found that Dicer knockout ESCs (D-/-ESCs) seem to be able to express IFNb and are highly sensitive to the increased cytotoxic effects of dsRNA. Similarly, B2RNA, a cellular RNA derived from the transcripts of transposable elements, showed remarkably similar effects to these caused by dsRNA. These findings challenge our view that the lack of IFN response is intrinsic in ESCs. Instead, our finding suggests that the basic machinery of the IFN system is functional in ESCs, but it may normally be repressed by Dicer.

We hypothesize that, by repressing IFN response, Dicer may act as a sentinel enzyme to prevent excessive antiviral responses that could potentially harm ESCs during early embryogenesis. Using mouse ESCs as a model system, we will test this hypothesis and expect to provide significant insight into the unique immune properties of ESCs, specifically on how the IFN-based antiviral innate immunity is more delicately controlled by Dicer to ensure normal growth and development at the early stage of organismal development.

Sporadic Alzheimer disease (sAD) is a neurodegenerative disorder that leads to acute memory and cognition loss in the elderly patients. An important characteristic of sAD is the diverse clinical sub-types that arise from different pathological phenotypes. Determining the molecular underpinnings of such clinical differences is important for diagnostic and therapeutic advances, but has remained a major challenge. Emerging evidence indicates that structural polymorphism within Aβ aggregates may cause the observed phenotypes in sAD. However, the relation between the neurotoxic, low molecular weight oligomers of amyloid-β (Aβ) peptides and the observed phenotypes remains unclear. Results from the Rangachari labsuggest that neurotoxic oligomers of Aβ42 formed in the presence of lipids (LDs) faithfully propagate their mesoscopic structure towards morphologically distinct fibrils and selectively induce vascular phenotype in transgenic AD mice. These results suggest that the distinct phenotypes can emerge from specific oligomer conformations, but also raise the question of whether LDs play a key catalytic role in generating distinct oligomer strains that manifest in pathology. We hypothesize that the physiochemical characteristics of LDs modulate Aβ aggregation to generate oligomer strains that propagate to elicit discrete phenotypes in the brain. The proposed research in the Rangachari lab focuses on testing this hypothesis by determining the mechanistic understanding of LD-derived oligomer strains with three specific aims:

Together, the proposed research will generate critical insights into how phenotypes emanate from conformations of aggregates in sAD, and open new avenues for potential therapeutic interventions.

Clumping of protein molecules in a process called ‘aggregation’ is a common problem in cellular biology. During the last two decades, one kind of protein aggregation that leads to a specific structure of the clumps called ‘amyloids’ have been implicated to play key roles in many neurodegenerative diseases including Alzheimer disease (AD). More recently, some such protein amyloids are also associated with normal cellular functions, indicating the growing significance of amyloids in both norm and pathology. As diverse aggregate forms are generated during aggregation, many of which elicit specific biological response, understanding the mechanisms of aggregation is critical. Amyloid formation is often influenced by many biological molecules, one of which is the surfactant (SA) molecule. SAs are a part of lipids that are known to associate many amyloid proteins, especially the protein called, amyloid-β (Aβ) involved in AD.

In the proposed project, the Rangachari lab along with a team of collaborators will decipher how SAs modulate Aβ aggregation to generate specific aggregate species. These will transform our understanding of the complex behavior of SA-Aβ interactions. This scientific endeavor will also involve many students, who will not only learn new areas of research but will also contribute towards data collection and interpretation of results.

A detailed knowledge of the relation between chemical composition and structure/function of proteins is crucial for an understanding of disease pathways and the working of drugs at the level of cells. Despite decades of research, both experimental and computational, this relationship is still only partially understood. In the present project, we develop advanced computational methodologies to investigate structural changes that are difficult to probe in experiments but are important because they change the function of proteins, or the toxicity of protein aggregates. These techniques are tested and optimized in studies of two proteins, RfaH-CTD and lymphotactin, that change their function by switching between two different structures. While focusing on simple model systems, the gained insight may guide therapeutic applications, for instance, the design of components that stabilize a certain conformation. In a second set of simulations we extend our techniques and concepts to the oligomerization of amyloid-forming Aβ -peptides, implicated in Alzheimer's disease.

Combining computational studies at the Hansmann lab (U. Oklahoma) with experimental investigations by the Rangachari Lab, they will study the transition between toxic and non-toxic (or less toxic) aggregates, and why some amyloids can seed their own growth by converting other forms. Understanding this process may in turn lead to the development of drugs that modulate the spread of such “infectious strains”.

Dr. Huang’s research spans interdisciplinary areas of bioorganic chemistry, biochemistry, RNA chemistry, synthetic biology, and targeted delivery of therapeutics.  One of my main research interests lies in the origin and evolution of living systems, particularly the role of RNA in the origin and evolution of contemporary metabolic pathways such as CoA, NAD, and FAD. Additionally, I’m interested in developing simple and efficient cloning methods for use in bioengineering such as constructing bio-circuits in synthetic biology and reverse genetics of viruses.

Center for Molecular and Cellular Biosciences