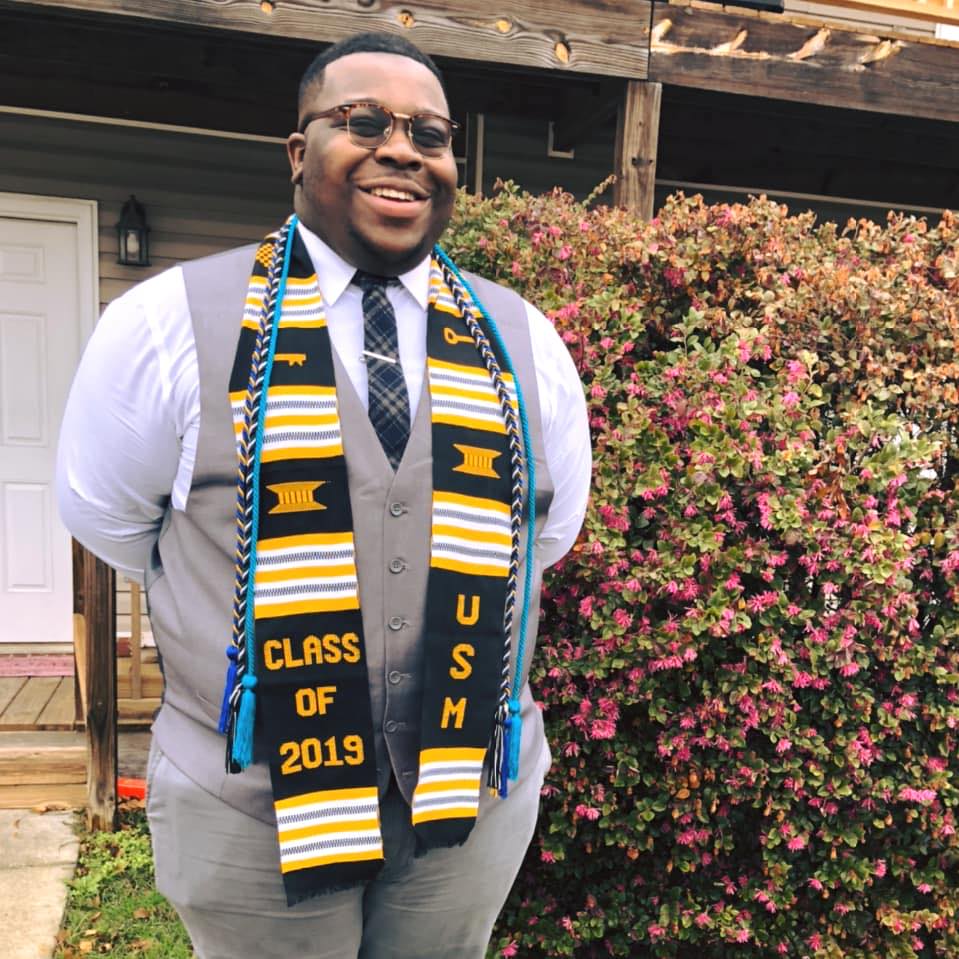 Corinthian Scott had not heard of Ellie Dahmer and the story of her family’s clash members of the Ku Klux Klan that resulted in the death of her husband, Vernon Dahmer, until he came to school at The University of Southern Mississippi (USM).

Vernon Dahmer died from injuries suffered while trying to protect his family when his Forrest County home and business were firebombed by members of the Ku Klux Klan in 1966, in response to his voter registration efforts in the local African-American community. He stayed behind to return gunshots, allowing time for his wife and children to escape their burning home.

Dr. Ellie Dahmer was honored during USM’s fall 2019 commencement exercises with a Doctor of Humane Letters, honoris causa, for her Civil Rights work alongside her husband, and following his passing, as well as her efforts as an advocate for literacy and academic achievement. Scott was also awarded his bachelor’s degree during fall 2019 commencement.

A native of Atlanta, Georgia, Scott moved to Terry, Mississippi, as a teenager, then travelled south to attend college at USM in Hattiesburg. A broadcast media major who minored in black studies, Scott visited the Dahmer home in Forrest County, just outside of Hattiesburg, during a field trip with fellow students in his Introduction to Black Studies course.

“It really meant a lot to me to get my diploma at the same commencement ceremony sessions as when Mrs. Dahmer was honored,” Scott said. “It’s pretty awesome that we honored her in this way, to take special notice of what she’s done. It’s a well-deserved recognition.”

Scott, who loves taking pictures and producing videos, plans to pursue a career in digital media, working with businesses to help them connect with potential customers, but would also like to create a series of videos spotlighting community heroes like Dr. Dahmer.

“Being from Atlanta originally, I didn’t know about her story until I came to USM and got to meet with her and her family during our field trip,” he said. “I’d love to do a series on local people like her, who might not be as well-known outside their communities, but whose impact is significant, and whose stories deserve to be shared with a broader audience.”

Maggie Williams, an instructor of journalism in USM’s School of Communication, said Corinthian Scott is “one of those quiet students, but I've found in my years of teaching that it's the quiet ones who roar the loudest when given the chance.”

“He was diligent about things in the classroom, and he put that diligence to work for his post-graduation job search,” Williams said. “When I last spoke to him before classes ended, he had several offers to choose from and was pretty pleased with those options. He'll do well, I have no doubt.”