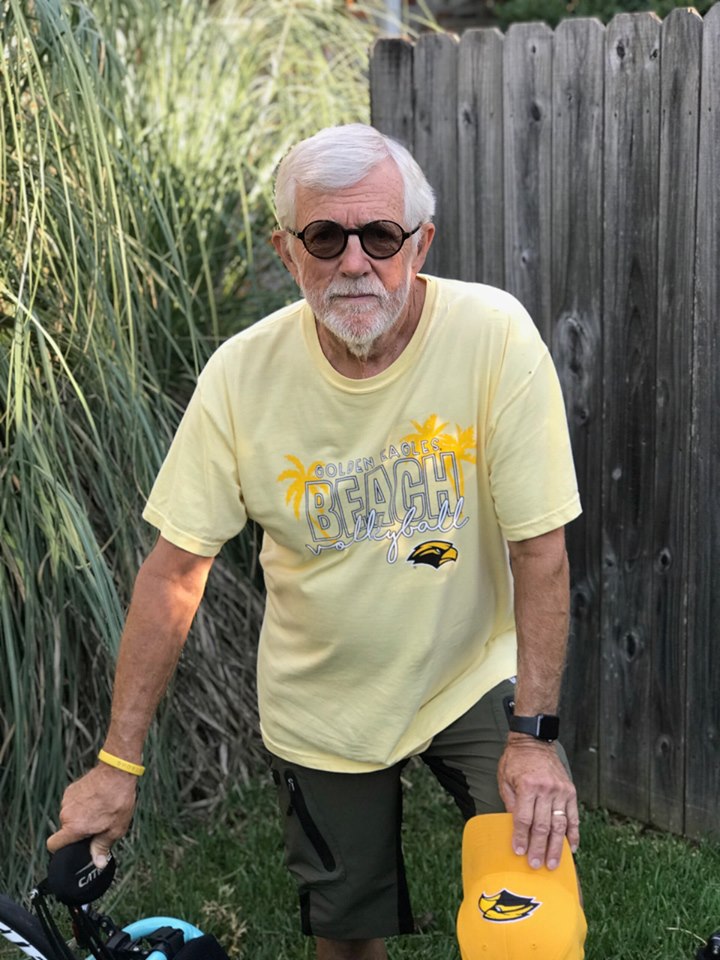 Denny Behm is putting the wheels in motion to promote live-donor kidney transplants.

A Hattiesburg resident and retired University of Southern Mississippi (USM) professor of music (French horn), Behm, 79, is organizing a 300-mile bike ride event in Sept. 2-7 from his native Iowa to the Hennepin County Medical Center in Minneapolis, Minnesota, where 13 years ago he donated a kidney to a longtime friend, Rich Dean, who needed a transplant to survive.

Behm’s goal for the bike trek is to not only bring awareness to the opportunity people have to save a life through live-organ donations, but also help another person  in need of a kidney, Barry Presley, a U.S. Navy veteran in Atlanta.

“I educated myself about the process of being a live kidney donor, and got tested to see if I was a match for him,” Behm said of the transplant. “After witnessing the positive outcome, and having no negative side effects after all these years since of living with only one kidney, I developed a passion to encourage others to consider becoming a donor.”

Not knowing anything about living kidney donations at the time, Behm was surprised to learn that his kidney would be removed laparoscopically and he would have no scar, and no lasting side effects. As for the recovery time, “I’ve had colds that were much worse than the post-op recovery,” he said.

“I was in the hospital for two or three days, and then stayed in Minneapolis for a week, remaining there until I could have a post-op checkup,” he said. “There have been absolutely no side effects, and my creatinine level has remained constant at about 1.1, which is about what it was before the transplant (the normal range for creatinine in the blood may be 0.84 to 1.21 milligrams per deciliter).

Behm learned about Presley’s plight while visiting the website “Kidney Stories” and decided to start a GoFundMe to assist him and his family financially while he awaits a transplant. Presley has been on dialysis for the last five years while on a kidney donor waiting list; his wife Marshina donated a kidney to Barry, but the transplant failed.

“It’s heartbreaking to think about what he and his family have been through,” said Behm, who continues in his efforts to directly aid the Presley family financially, along with the support of others.

Behm will be joined by three of his former students on the ride to Minneapolis -  Patrick Creel of Austin, Texas, Mary Elizabeth Wood of Salt Lake City, Utah, and Ginger Lai of The Bronx, New York City, New York -  as well as USM Assistant Director of the Office of Fraternity and Sorority Life Megan Wilkinson.

Behm welcomes others to join him on the ride, which he said will go at “a rather modest pace.”

Wilkinson has been preparing with Behm and the rest of the group for the September trek by riding the popular Longleaf Trace, a 40-plus mile stretch of converted rail line from Hattiesburg to Prentiss. She first came to know Behm as one of his and Kay’s employees with their business, K & D Estate Sales, and it was at an estate sale when she learned he was a kidney donor, and became inspired by his story and mission.

“He shared the no-brainer decision to support his friend, how persistent he had to be with medical professionals to prove he, as a 67-year old, was ‘strong as an ox,’” Wilkinson said. “He shared with me that he wanted to show others how physically unaffected he was by his kidney donation with a bike ride through Iowa, and invited me to pedal alongside.

Taking on such an endurance test at his age impresses not only Wilkinson, but others who’ve learned of Behm’s plan to ride hundreds of miles on a bike. But he’s quick to put things back into perspective.

“I’ll turn 80 in August, and the message is, if an 80-year-old former horn player can ride a bike 300 miles after donating a kidney, giving someone a kidney is not going to do you any harm,” Behm said. “I guarantee it’ll make you feel really good about yourself.”

Donations in support of Behm’s bike ride will go to the Hennepin County Medical Center Foundation. To support Behm and his team, contact him at dennybehm@icloud.com and to support Barry Presley, visit https://www.gofundme.com/f/a-kidney-for-barry.

A new program supporting live organ donations known as NEAD™ chain (Never Ending Altruistic Donor chain) begins with one non-directed (altruistic) potential organ donor. In this program, the non-directed donor gives to a person waiting for a transplant, and that recipient’s willing—but incompatible—donor gives to another person waiting, and so on. Each living donor in this system gives to a stranger, and the chain of donors is kept going as long as possible. To learn more about donating, go to the National Kidney Center website: http://www.nationalkidneycenter.org.