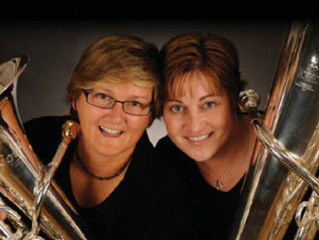 The University of Southern Mississippi (USM) School of Music presents its Connoisseur Series featuring SymbiosisDuo on March 1 at 4 p.m. in Marsh Auditorium. This free event is presented in part by Partners for the Arts.

Dr. Stacy Baker and Dr. Gail Robertson comprise SymbiosisDuo, a tuba/euphonium duo designed to promote and disseminate new works for this instrument combination. SymbiosisDuo comes from the concert duet of the same name written for the pair by composer Chris Sharp.

In the program notes for the work, Sharp writes, “Symbiosis is defined as, ‘A relationship of mutual benefit or dependence’…The technical and range-requirements for each solo instrument are comparable, suggesting a ‘separate but equal’ relationship.”

For the performance in Hattiesburg, SymbiosisDuo will be assisted by pianist T.O. Sterrett. They will be performing three works by Sterrett, as well as compositions by Kevin McKee, Ben McMillan, and Gail Robertson.

Dr. Stacy Baker (tuba) enjoys an active career appearing as featured artist at International Tuba/Euphonium Conferences (IWBC); U.S. Army Band “Pershing’s Own” Tuba/Euphonium Conferences; and International Tuba Festivals. Baker has toured and recorded throughout the United States, Europe, and China as a soloist, and as a founding member of Symbiosis Duo, the tuba/euphonium quartet JUNCTION, the IWBC’s Monarch Brass, and the Athena Brass Band.