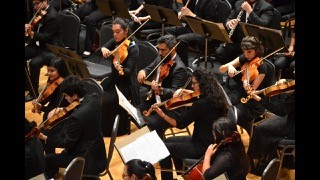 The University of Southern Mississippi (USM) Symphony Orchestra proudly presents its opener of the new year: Isn’t It Romantic on Feb. 20 at 7:30 p.m. in the Mannoni Performing Arts Center on the Hattiesburg campus. This event is presented in part by the generous support of Partners for the Arts.

One of the most dynamic conductors of our time, Ms. Apo Hsu, returns to guide the orchestra in an evening of music from the Romantic period. Southern Miss School of Music cello Professor, Alexander Russakovsky, will also join the orchestra to perform one of the period’s great cello solo works.

The program will feature Verdi’s Overture to La Forza del Destino; Tchaikovsky’s Variations on a Rococo Theme in A major, Op.33; and will conclude with Brahm’s Symphony No. 2 in D major.

“I fondly remember my previous engagement with Southern Miss Orchestra because the students were so talented and open to new musical ideas,” said Hsu. “I am excited to see what we can accomplish this time around.”

“Ms. Hsu’s last appearance with the orchestra in 2014 was a critical success, and this program is sure to excite both musical novices and purists alike with lush, rich, beautiful romanticism,” said Interim Director of Orchestral Activities Dr. Michael Miles. “We are so pleased to have Ms. Hsu here again to share her extraordinary talent with our students.”

A dynamic force in the music world, Taiwanese conductor, Apo Hsu has circled the globe with an international career encompassing a wide array of guest appearances, residencies and tour performances. In the United States, she has appeared as a guest conductor with major national orchestras from coast to coast, including the San Francisco Symphony, National Symphony Orchestra (Washington, D.C.), and many others.

Southern Miss School of Music faculty member, Alexander Russakovsky, is one of the South’s leading performers and pedagogues on cello. A recipient of many awards, he won the Angela and Maurice M. Clairmont Competition in Tel Aviv, the Performing Arts Scholarship Foundation Competition in Santa Barbara, and the 1999 Career Grant of the Esperia Foundation.

Price of admission is $25 for the general public, $10 for youth,  and free for students with ID.