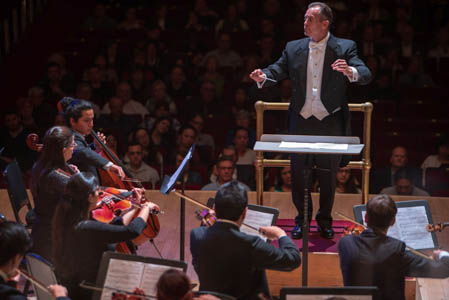 The University of Southern Mississippi (USM) Symphony Orchestra announces its 102nd season, opening Sept. 30, 2021 and offering a concert a month throughout the academic year.

“The past 18 months have proven live performance art adds value to our lives,” said Dr. Michael Miles, Director of the Symphony Orchestra. “We are so pleased to be able to provide you with live orchestra music again, and our students have never appreciated the value of your presence as much as they will this season.”

The season, entitled “Uncharted Territory,” explores the complicated landscape we face coming out of the pandemic. Recognizing that the world has been turned on its head by a series of events unprecedented in our lifetimes, the pandemic shook our will and made some question their belief in science and facts.

“Each season series concert theme is identified by a quote that relates to one or more of the challenges we now face as a civilization, and the music chosen for each concert also relates to that quote,” Miles continued.

Opening night opens with the incredible Fanfare for the Common Man and Appalachian Spring by Copland. Then, guest trumpeters Christopher Moore and Mark Clodfelter showcase their virtuosity in the popular Carmen Variations. In October, the Southern Opera and Musical Theatre Company returns to the stage with a new take on Hänsel und Gretel. On Nov. 11, the orchestra performs Strauss’ Don Juan and welcomes Time for Three.

Time For Three stands at the busy intersection of Americana, modern pop and classical music. Recently featured on NPR’s Tiny Desk concert series, their unique blend of artistry, singing and dancing while performing classical, blue grass, pop and all other genres of music in a fast-paced and energetic show has inspired audiences around the world.

The region’s official start of the holiday season returns when the Symphony Orchestra and Choral Activities unite November 30 and December 1 in the Holiday Choral Spectacular.

The New Year brings a return engagement of Joseph Alessi, Principal Trombonist of the New York Philharmonic as he joins forces with Southern Miss’s own Ben McIlwain and the winners of the annual William T. Gower Competition for and exciting night of music.

Dolly Parton’s smash-hit musical is the most fun you’ll have at the theatre all year! With a rip-roaring score by the Queen of Country, 9 to 5: The Musical takes to the Mannoni Performing Arts Center Stage March 3 – 5. Inspired by the iconic ’80s film and brought to you by Dolly herself, this hilarious new production is about teaming up, standing up and taking care of business!

The final concert of the season, …and Justice for All, is the centerpiece of a week-long series of events that will shine a light on the social justice issues in our country and community. Don’t miss this dynamic and inspiration season finale on April 21.

“We would like to thank all of our faithful patrons for your patience during the pandemic by including a discount of one free concert in the season ticket price,” Miles continued. “We need to see you at the Symphony.”