Be Honest About the Past, Stop Memorializing White Supremacy 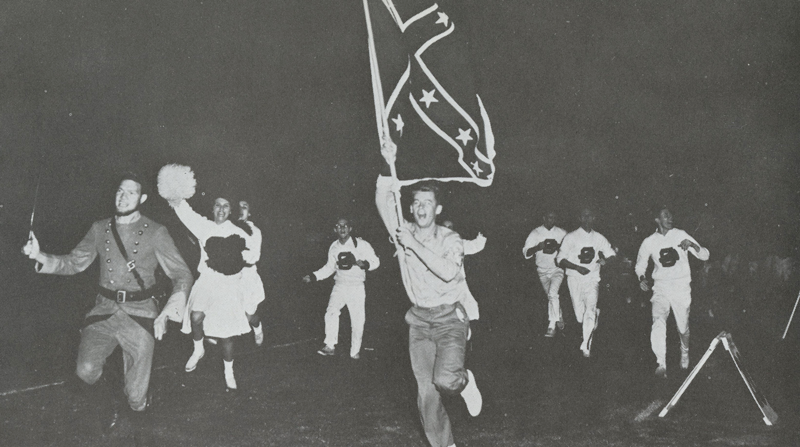 "Team Lead on in Southern Style" / The Southerner yearbook, 1962

The Black Lives Matter Movement of 2020 has created a chain reaction of people pushing for social justice to bring about change. Across the nation and around the state, institutions -- including The University of Southern Mississippi -- have been working on changing their public image by removing symbols tied to a racist past.

Nationwide, protests and petitions have called for buildings to be renamed and statues and monuments to be removed if they are traceably linked to the history of racial segregation, slavery, or white supremacy.

Mississippi recently replaced its state flag that featured the Confederate battle symbol for 126 years. On June 30, 2020, Gov. Tate Reeves signed a bill to retire the old flag and ban using the Confederate emblem as an official state symbol. On Monday, Jan. 11, 2021, Reeves ratified the bill for the new Mississippi flag with a more appropriate symbol, a magnolia blossom (the state flower). It now flies at the state capitol in Jackson and at all state institutions.

Locally, there’s still work to do. Although the majority of voters in Mississippi approved removing the flag with the Confederate emblem, residents in Forrest County disapproved of a measure to relocate a Confederate statue in downtown Hattiesburg, a majority-Black city; the vote was 49% for, 51% against in November 2020.

In Oxford, however, a year after University of Mississippi students voted unanimously to move a Confederate statue from the center of campus, Ole Miss relocated it to a cemetery on its grounds in July 2020. Comparisons across the state are drawn here in considering the historic ties communities have with a local university.

A month later, Southern Miss announced that it would begin the process to consider changing the name of Dixie Darlings, its dance team that has been in existence since 1954. The team’s signature song, “Are You From Dixie," also could change on the recommendation of “critical stakeholders,” including the student body.

The name “Dixie” has been degrading to Black Americans for centuries. During the Civil War, it was used as the Confederate Army’s marching song and an unofficial anthem of the Confederacy, according to CNN. It also was a song used in racist minstrel shows where whites performed in blackface.

“I think it’s an important change so that future Dixie Darlings will have that safe space. We come here to college to get an education and as dancers that is our outlet,” Stubbs said. “I feel like that should be something everyone gets to do without having this umbrella over them about the fact that they are called something that doesn’t even include them.”

Stubbs recounted numerous times when people asked her about her stance on being a Black Dixie Darling.

“I will say, sometimes it was weird saying I was a Dixie Darling,” Stubbs added. “I’m a Black woman. Dixie Darlings wasn’t for Black people or any person of color.”

As of February 2021, the name Dixie Darlings is still being used on the Southern Miss website in reference to the Pride of Mississippi Precision Dance Team. It is unclear how the process to change the name is progressing.

Even though it is good to hear about changes in Mississippi and at Ole Miss and a possible change at Southern Miss, students seeking to remove at least one name from the Hattiesburg campus have been unsuccessful for legal reasons.

In 2018, the Southern Miss Student Government Association discussed getting the name of William David McCain removed from McCain Library and Archives. McCain was the fifth president of Mississippi Southern College, from 1955 to 1975, and, under his tenure, it became The University of Southern Mississippi. He played a central role in ensuring that Clyde Kennard could never enroll in the predominantly white school during the 1950s. McCain, a military veteran, was a staunch segregationist who helped to reestablish the Sons of Confederate Veterans and was a member of the segregationist Citizens Council.

Mississippi state law does not allow structures to be renamed if they were named for any historical military figure. McCain was a Major General in the Mississippi National Guard and served in World War II and the Korean War.

“The conservative South is hard to get away from all of the monuments, the places named after all these self-proclaimed racists and racist people because of where we are,” Stubbs continued. “I think that people who are administrative or in higher positions should put that into consideration the fact that these stadiums, monuments, and names of these racist people no longer represent the times we are in right now.”

Another structure on campus connected to a self-proclaimed racist is M.M. Roberts Stadium. It is unclear whether any state law prohibits Southern Miss from removing his name from the stadium.

Malcolm Mette Roberts, an attorney and Southern historian/archivist, served as president of the Board of Trustees of the Mississippi Institutions of Higher Learning from 1960 until 1972. According to “Exit 13: Oppression and Racism in Academia” by Monte Piliawsky, in a speech Roberts gave to the American Association of University Professors on campus, he said, “But as I’ve gone along through the years and looked back I’ve said to myself really that I am a racist. Every time I read a definition I say, ‘Well, that’s me.’ I have no apologies for it, though. It’s me.”

Piliawsky wrote that Roberts, who also banned some civil rights leaders from speaking on campus and voted to withhold James Meredith’s degree from Ole Miss, said large numbers of full-time Black faculty would not be hired at predominantly white institutions, calling the idea “destructive.”

“I think if you want to be a stupid idiot just stir for that kind of thing.…one who thinks it seriously in his heart ought to get out of here and get out of this institution, because you don’t belong in our society if you think that is necessary -- a thing we’ve got to do,” according to Piliawsky’s book.

These blatant acts of racism were allowed in the past due to Ross Barnett’s appointment as governor and by being colleagues with M.M. Roberts at Ole Miss. Barnett appointed Roberts to serve in this position of authority, encouraging racism and acts of discrimination.

In 1975, former Southern Miss president McCain dedicated “The Rock” stadium after M.M. Roberts because of his fundraising for the university; the stadium opened a year later. However, when referring to the stadium where thousands of students and other spectators support the Golden Eagles football team, which is mostly Black today, some players and performers of color don’t know where the name comes from.

“To be honest, I didn’t know who M.M. Roberts was, but about the stadium, it’s an honor to play out there, but it’s crazy,” said Paul Gainer Jr., a senior offensive lineman on the football team.

“It’s sad to say, but that’s the America we live in. I feel like there’s always going to be racial tension from somewhere. I think everybody knows it’s around and they see it, they just don’t say it,” Gainer said. “Some people do need to speak up and say something, but I feel like right now, it’s time for a change.”

Added Stubbs, the former Dixie Darling: “He didn’t want me there, and I performed in a stadium that was named after this man who did not care about my life or anything about it, but at the time, I didn’t know who he was or anything about him.”

“Having his name on the stadium sends a message that is directly counteractive to the progress that the university has made over the years,” Davis said. “It invalidates the efforts that they are taking. You want to do this and be a sign of diversity, and you want to welcome students, but you have this racist name on your stadium.”

Even deeper than the stadium name, part of the football field, Carlisle-Faulkner Field, is named after a Jim Crow-defending racist, Louis Edward Faulkner, because he donated material to have the football field created and was chairman of the Hattiesburg committee of unemployment relief. The rabbit-hole continuously grows bigger with places on Southern Miss’ campus with names that need to be changed or clarified for context.

Student Lohn Lenoir said he thinks Southern Miss will be transparent with students about Roberts’ background. “I think that they’ll do it in a way that they’ll acknowledge him and not disrespect him,” Lenoir said. “They won’t say that he was a bad person, but the things that he did were bad because those were the times that we were living in.”

Emblem for the "University for the New South" Campaign

Almost 30 years ago, the university promoted itself as the "University for the New South," a moniker that appeared on bumper stickers and promotional materials insinuating a more "progressive" institutional experience in the state during that time. That campaign was successful in perpetuating a facade of advancement the university has yet to reach.

Jourdan Green, president of the Alpha Kappa Alpha Sorority chapter at Southern Miss, said because the university loves to claim to be the most diverse university in the state, it should try to be more inclusive.

“It's important to move past tradition and get to a place where everyone feels comfortable. More conversations need to happen,” Green said. “Situations during orientation include names and observe different buildings. We need to know what part of the university did they contribute to so we can move forward in a progressive way.… Be honest about the past and be open to changing tradition.”

➤ To comment on this spring 2021 article, visit the Center for Black Studies on Facebook.
➤ To give and support the Kennard Scholars, visit the USM Foundation.