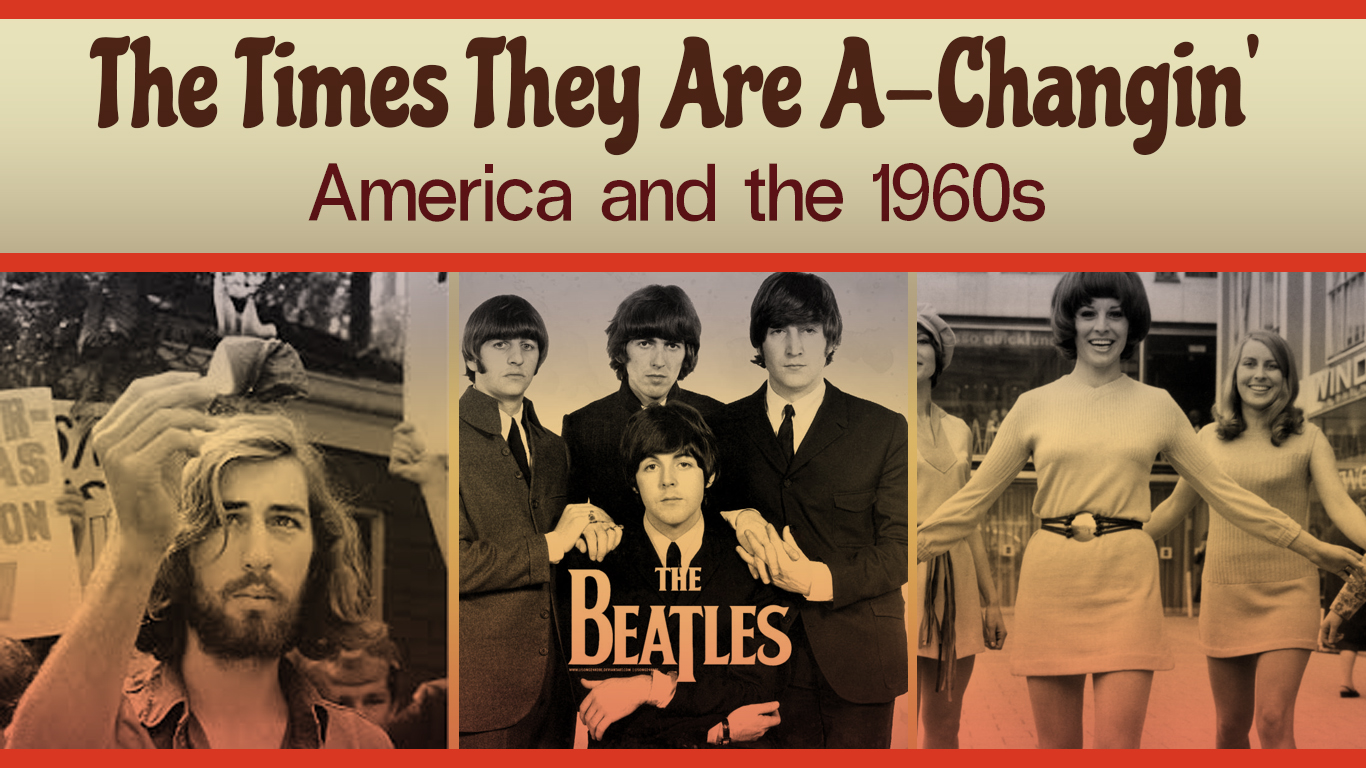 The iconic Sixties: Mini-skirts and draft dodgers; the Beatles and burning crosses; assassinations and demonstrations. No single decade in America's recent past looms larger in contemporary America’s cultural memory—or is so misunderstood—as the 1960s. As SDS member and 60s scholar Todd Gitlin notes, “perhaps no decade has suffered” the inevitable and unfortunate reductionism that simplistically labels all historical periods “more than ‘the Sixties,’ which in popular parlance has come to stand for a single seamless whole.”

Complicating and expanding the arbitrary periodization of the 1960s, recent scholars suggest that it is really the "long 1960s”—that is, the late 1950s through the early 1970s—that created contemporary America: the Cold War and anti-communism; the Vietnam War; the social protest movements of the 1960s and '70s (anti-war, Civil Rights, women's rights). The dramatic social changes that resulted from this tumultuous period redefined American life, and they account for the political and cultural conservatism that prevails in the U.S. today.

This course will examine perceptions and misperceptions about the Sixties, and the broader concept of the long 1960s, through cultural texts (journalism, film, literature, etc.) of the era. 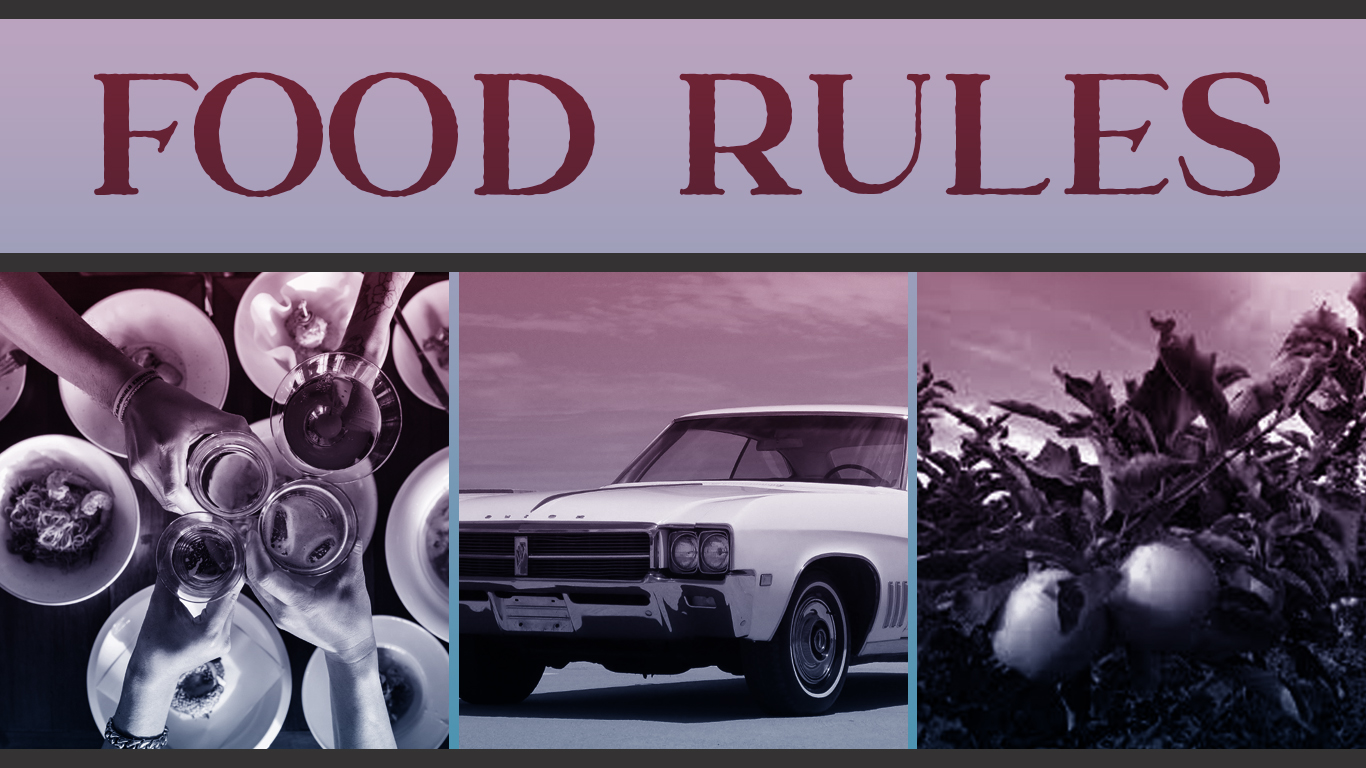 This course will explore food, glorious food: as generator and preserver of culture; as expression of identity, as beleaguered victim of big money, as expression of ethical values, as ritual and celebration. Readings will be wide ranging, as will possible topics for writing. For example, we will encounter April Lindner’s poem, “Full Moon with Snow,” along with her recipe for “Full Moon Soup.” Courtesy of Michael Paterniti, we will ride cross-country with Einstein’s brain. With Wendell Berry, we will contemplate the past and future of working the land.  When possible, we will sample foods from the poems, essays, and stories we are reading. In short, we will employ both senses and intellect, think both subjectively and objectively, and examine attitudes and customs current, longstanding, and vanished. Hattiesburg restaurateur and writer Robert St. John will talk to us about what food has meant to him as an enterprising restaurateur and writer. We will learn firsthand, with Marion Nestle, that “the joy of learning is like eating, and words are dishes to be savored.” 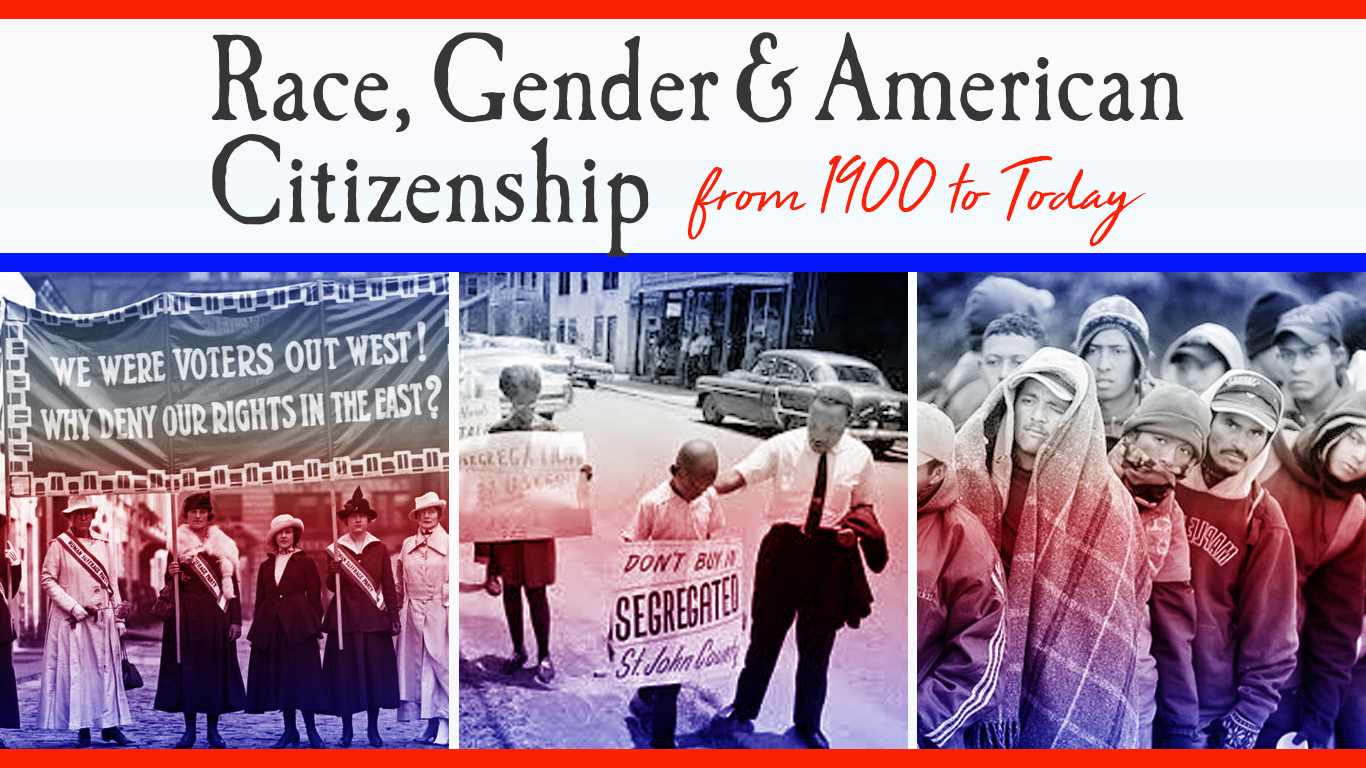 What does it mean to be an American citizen? Who has the right to claim that title? Why? This course will explore the raced and gendered nuances of citizenship in the twentieth- and twenty-first-century United States.  We will begin by studying women’s fight for suffrage in the context of both World War I and Jim Crow, exploring how the struggle for citizenship has often been built on the backs of others. We will then shift to consider how the mid-century Civil Rights Movement both incorporated and silenced the concerns of diverse racial groups and women. Finally, we will end by examining citizenship debates around voter-id reform, incarceration, and immigration over the last forty years.  In our exploration, we will make use of a variety of texts, from speeches, newspaper articles, and scholarly works to photographs, advertisements, poetry, music, and visual art. 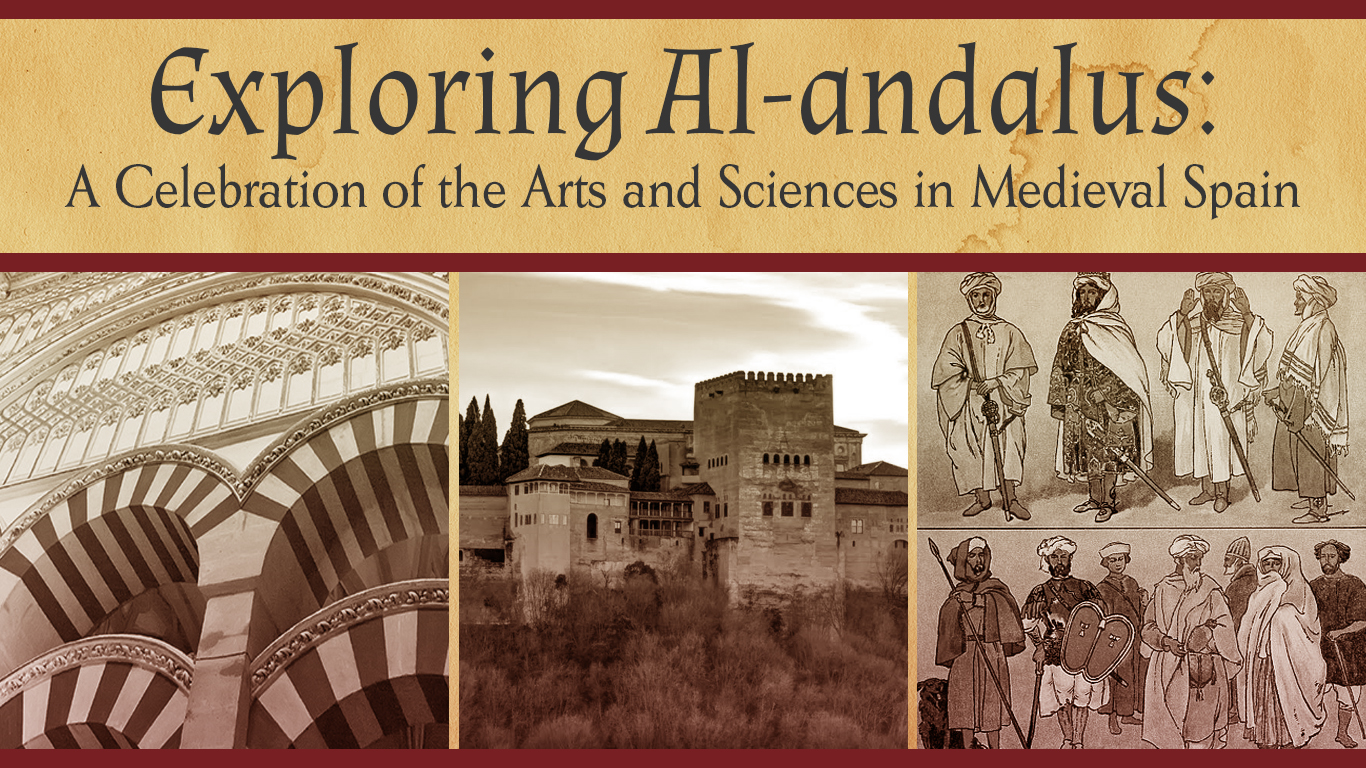 This course will examine important discoveries, cultural practices, and artistic endeavors that emerged during the florescence of Moorish Spain (700-900 CE). This was a time when people of Jewish, Christian, and Muslim faiths lived and worked together in relative harmony. Al-Andalus was the place that celebrated rhyming poetry, indoor plumbing, algebra, ceramic technology, dessert, pillows, agricultural advances and many other important aspects of "modernity." In this course, we will investigate how these practices and technologies have impacted our own lives and lifestyles. 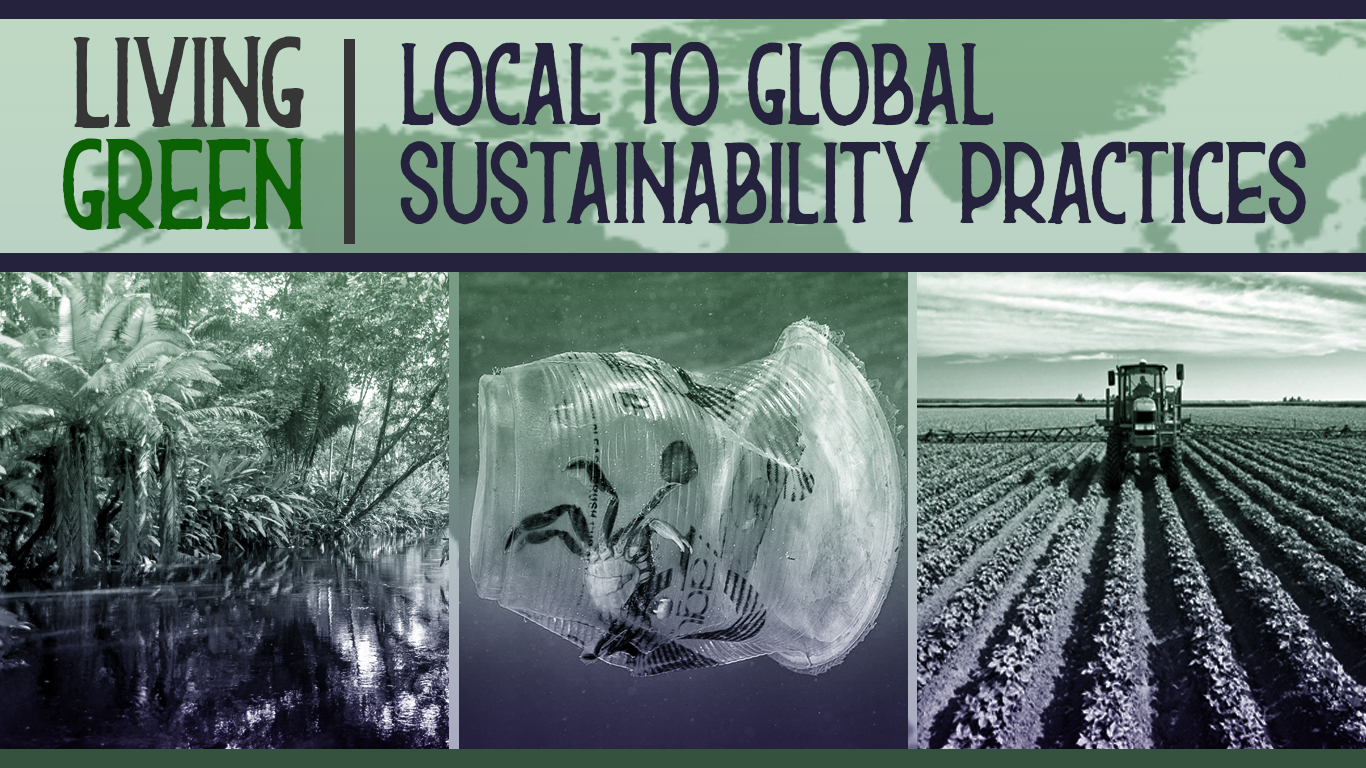 Living Green will explore the many perspectives of sustainability, from the food we eat to the air we breathe to the materials we make—and the relationship between all of these.  We will ask and attempt to answer such questions as: How do Americans measure up in relation to the rest of the world in terms of our global footprint?  Why does that matter?  How does eating at McDonald's shift the CO2 index in Malawi?  And what does it really mean to live “sustainably”?  We will explore these and many other ideas in an effort understand how we can make a positive difference in our environment.  Biology, nutrition, technology: it all matters when you’re Living Green! 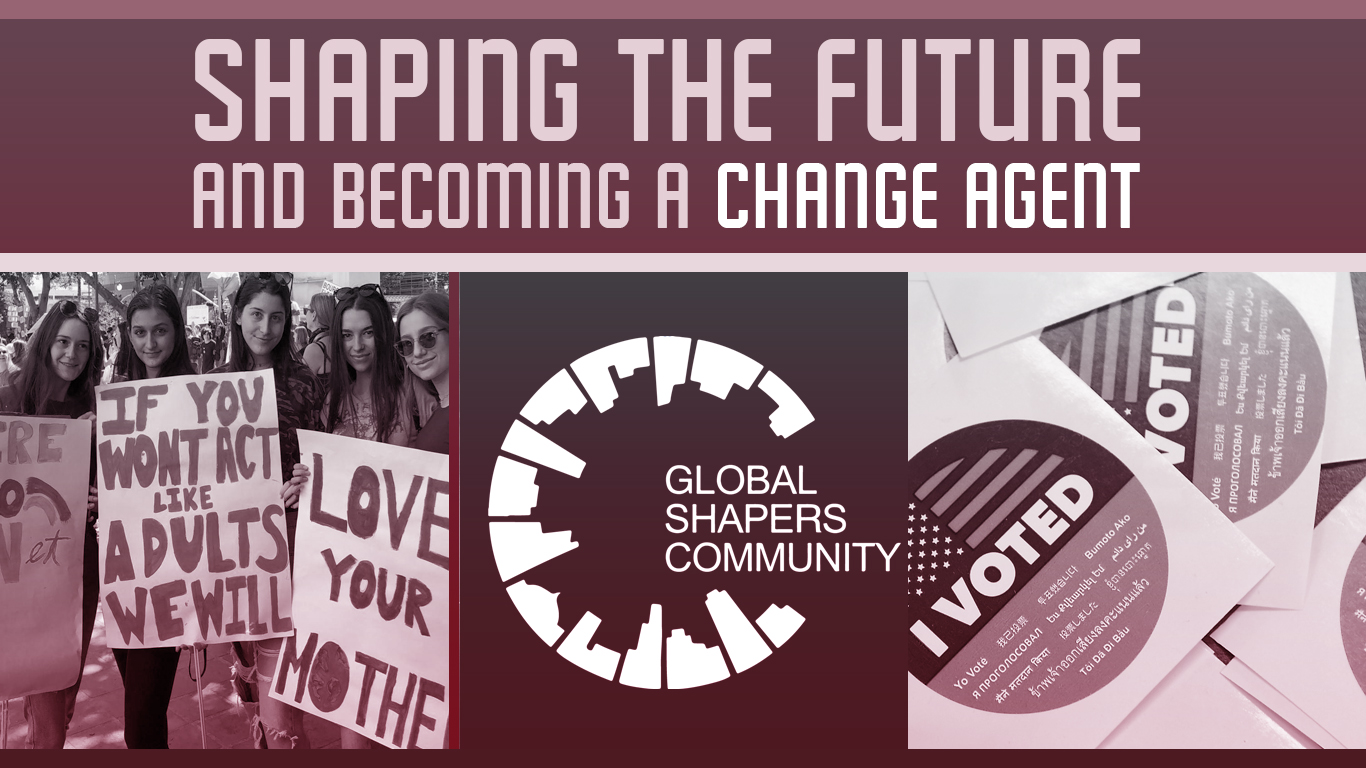 I hope you learn to make it on your own
And if you love yourself just know you'll never be alone...
And when you get it all just remember one thing
Remember one thing: That one man could change the world.

Artists from Big Sean and Christina Aguilera to Michael Jackson and Sam Cooke have written songs about the power of young people to change the world. Like these artists, the “Global Shapers Survey” recognizes that youth have the power to make change. Offered every two years, this survey asks both “how young people see the world” and “what they want to do about it.” Beginning from the premise that “with the largest youth population in history, there is an unprecedented opportunity for young people to take an active role in shaping our future,” The “Global Shapers Survey” digs into “how young people see the world” and “what they want to do about it.” In this class, we will explore those same ideas: what are the issues that concern you—and what do you want to do about them?  After investigating the idea of change itself and examining the data and information provided in the Global Shapers Survey, our class is going to be based almost exclusively on your concerns about the world around us. We will determine what topics we want to investigate and the tools we need to investigate them; from there, we will work—collectively and individually—to create projects that we think can be starting points for real change.

What do the foods you eat tell others about who you are?  In this seminar, we will look at how food has contributed to creating national identities, global migrations, economic inequalities, and international conflicts.

We will start abroad and then return home. In the first part of the course, we will look at case studies from four regions of the globe where food has united and divided: East Asia, the Middle East, Africa, and Latin America.  We will explore these distant lands through nonfiction as well as fiction, the food itself (yes, there will be tastings), and popular culture.  Then we will return to the United States and use food to think about our own identities.

Through ethnographic studies of contemporary Mississippi foodways or historical studies of community cookbooks housed in the Culinary Collection at Southern Miss, we will consider how what we eat makes us who we are.

A work composed for tape recorder? A piece written for amplified cactus? A piano composition that doesn’t require a piano? A string quartet performed by four players in four helicopters? Music whose score is a comic strip? These are but a few examples of twentieth-century compositions that defy conventions and place unprecedented demands on their audiences. Where do such works come from? What were the composers thinking? What is the role of the audience in these performances?

This seminar will attempt to determine what led musicians to reject tradition in favor of such “weird” approaches to musical composition.  In our investigations, we will also examine parallel developments in the visual arts, dance, architecture, and experimental film.  We will also look at audience responses to weird music, from indifference to eager enthusiasm to full-blown riots. No musical background is required.

War is a staple of the modern age – a staple covered in nearly every textbook. But those books rarely go beneath the surface history of great leaders, titanic battles, and flawed peace treaties. War, though, is much deeper; much more visceral than that.

This class will certainly look at why and what modern (read Napoleon and beyond) wars were.  But it will also look at the humanity of war, using tools like prose, poetry, letters, diaries, and veteran visits to the classroom. War is violence at its most horrific; humanity at its most barbaric.  I want to investigate the question of how this barbarity and violence interacts with the souls and psyches of the young men and women sent to fight war and with the families that they left behind.

From the pyramids of Giza to the rural highways of North America, usually outdoors and always for the many rather than the few, public art ranges from government funded monuments to urban underpass graffiti. Whether voicing support of power, criticizing the status quo or celebrating its local community, public art is meant to be experienced by the public.

In this class we will look at murals, sculpture, train tagging, and more. We will compare the imagery of the past to contemporary public art and ask: What are the motivations behind these artworks and what messages are they are trying to convey? Is the art acceptable to those who view it or is it confrontational? How does funding, or lack thereof affect the outcome of the artworks? Can civic monuments re-define communities? We will go out into our community and take note of the public art we encounter. We will become active participants in the communication that is public art.

Many of us believe that we will eventually be happy once we achieve our goals and get what we want—a college degree, the right job, the right income—not realizing that the happiness that results from getting what we want quickly fades, and that happiness is actually a skill that can be cultivated.

In this course, we will engage in a scientific and practical exploration of happiness, including factors that contribute to happiness, including character strengths, positive emotions, motivation, relationships, positive mental health, and physical health. We will explore theories of happiness and positive emotions, as well as what the research says about character strengths that are associated with happiness and well-being, such as gratitude, sense of humor, optimism, and perseverance.

You will learn what your own character strengths are and how to use that knowledge to capitalize on those strengths.  We will learn about scientifically supported methods for increasing happiness, and you will be applying these interventions on yourself, so that you can learn skills to help you become the best version of yourself.

What we eat means so much more to us than just the nutrients that our physical body needs. In this seminar we will explore the myths, history, and physiology of food and nutrition, highlighting some interesting food trends and themes along the way. This interactive class will use the sciences, the arts, and the literature to learn more about how the foods we love to eat affect our mind, body, and emotions and conversely, how our culture affects the foods we eat. We will read Gulp: Adventures on the Alimentary Canal by Mary Roach for an informative and entertaining digestive journey.

This seminar will surely whet your appetite and take you into the world of food and nutrition that travels beyond our kitchen table!

In this class, we will look at a single year that changed everything people thought about art, culture, and the political order: 1913.

In the domain of politics, the rise of nationalism would begin the lead-up to WWI and the end of the Austro-Hungarian, Russian, and Ottoman empires, while agitation by workers—including the famous Patterson Silk Strike—led to changing labor laws and debates about capitalism across the globe.

In culture, Igor Stravinsky’s controversial ballet, “Rite of Spring,” with Vaslav Nijinsky as the lead dancer, provoked a riot on its debut in Paris; back in the United States, the famous Armory Show shocked the public with new abstract art from Cubists, Futurists, and others.  Literary modernism was born in the Poetry Bookshop in London and in the works of such writers as TS Eliot, Robert Frost, and Willa Cather.

Reading, studying, listening, and analyzing, we will examine these and other happenings in Europe and the United States as a means of understanding how the modern world was borne from them, and how they presaged the global crisis that would become World War I.