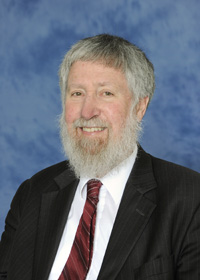 Gordon Campbell has lectured all over the world. His professional travel has taken him to some 70 countries, and his other scholarly travels to all seven continents. In the U.S., he has spoken in 24 states and the nation’s capital. He is a fellow of the British Academy, the Society of Antiquaries, the Linnean Society, the Royal Historical Society, the Royal Geographical Society, and the Royal Asiatic Society. He has published widely and authoritatively on Renaissance literature, John Milton, the history of the Bible, and many others subjects.

Listen Monday through Thursday during the spring semester 2019 for passages from Milton’s most famous works read by various members of the USM community.

Professor Jameela Lares, Moorman Professor 2017-19, will report on her forthcoming edition of a little-known work by Milton—a textbook on logic!   She will not only explain the work that a scholar must do to produce such an edition but will also say more about other surprising issues in Milton scholarship.

Milton’s great epic poem, Paradise Lost, is over ten thousand lines of strikingly beautiful poetry that summon up whole worlds of action. The early cinematographer Sergei Eisenstein claimed to have learned his art from Paradise Lost.

Volunteers will read sections of the poem aloud while others follow the text on the video screen or on the page. Feel free to read or just listen, to come for an hour or all day.