Marine educators provide students with a rich educational experience wrapped up in lots of fun, games and hands-on activities. 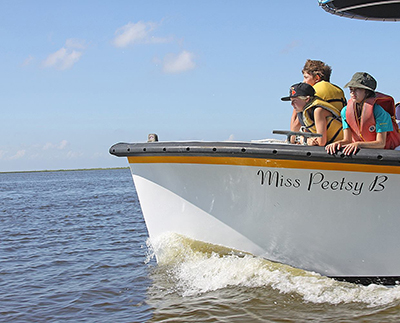 Participants explore coastal salt marshes with educators aboard the university research vessel, the Miss Peetsy B. Activities include live animal encounters with coastal wildlife and opportunities to fish, crab, seine and sieve. Students will participate in field trips appropriate for their ages, such as exploring beach habitats or a day at Ship Island.

For more information, contact the Marine Education Center by email or call 228.818.8095.

Sea Camp participants are put into one of three groups that include activities age appropriate for each of the groups.

Over the past 33 years, GCRL’s Sea Camp has become a summer tradition on the Coast.  Since 1989, more than 12,000 students have enjoyed this fun and educational program. During its life, Sea Camp has evolved to be more than an educational experience; it’s also become a family affair. Many of today’s students are the children of former Sea Campers. Other Sea Camp students have returned as staff members and then gone on to complete college degrees in marine sciences and become scientists and educators themselves.

Sea Camp is designed to foster an awareness and understanding of the coast’s fragile marine and aquatic environments in children ages 6 to 13. Campers learn about coastal stewardship through both classroom and field experiences.  Hands-on experience such as crabbing, fishing, seining, and sieving bring these valuable lessons to life for the campers.

This year’s theme is Coastal Conservation. On trips to local beaches, marshes, and Ship Island students will explore all aspects of the Gulf of Mexico and the creatures that live there. Educational art projects are used to reinforce the marine science lessons. These experiences educate children in ocean literacy and environmental stewardship, and connect them to the research conducted by GCRL.

Sea Camp was born in 1989 at GCRL’s J.L. Scott Marine Education Center & Aquarium in Biloxi. The Center housed Mississippi's largest public aquarium and featured many marine educational programs. Like many other coast landmarks, the Marine Education Center was lost to the winds and waters of Hurricane Katrina in August of 2005. By the next summer, the Marine Education Center and Sea Camp had found a new home on the campus of the Gulf Coast Research Laboratory in Ocean Springs. The new location has the advantages of a large campus with live oaks, a cafeteria, a pier for fishing and learning to throw a cast net, and dozens of scientists nearby. Without skipping a beat after Katrina, Sea Camp continues to provide all the wonderful educational programming for which it is known.

Come explore the Mississippi Coast and the creatures that live here!

Discover and explore the coastal habitats of the Gulf of Mexico.

Sea Camp is a great avenue to introduce young people to the rich diversity of coastal habitats and life found along the Mississippi Gulf Coast in a fun and hands-on learning experience. Sea Camp is not only creating more knowledgeable environmental stewards but it is also helping form our future scientists.