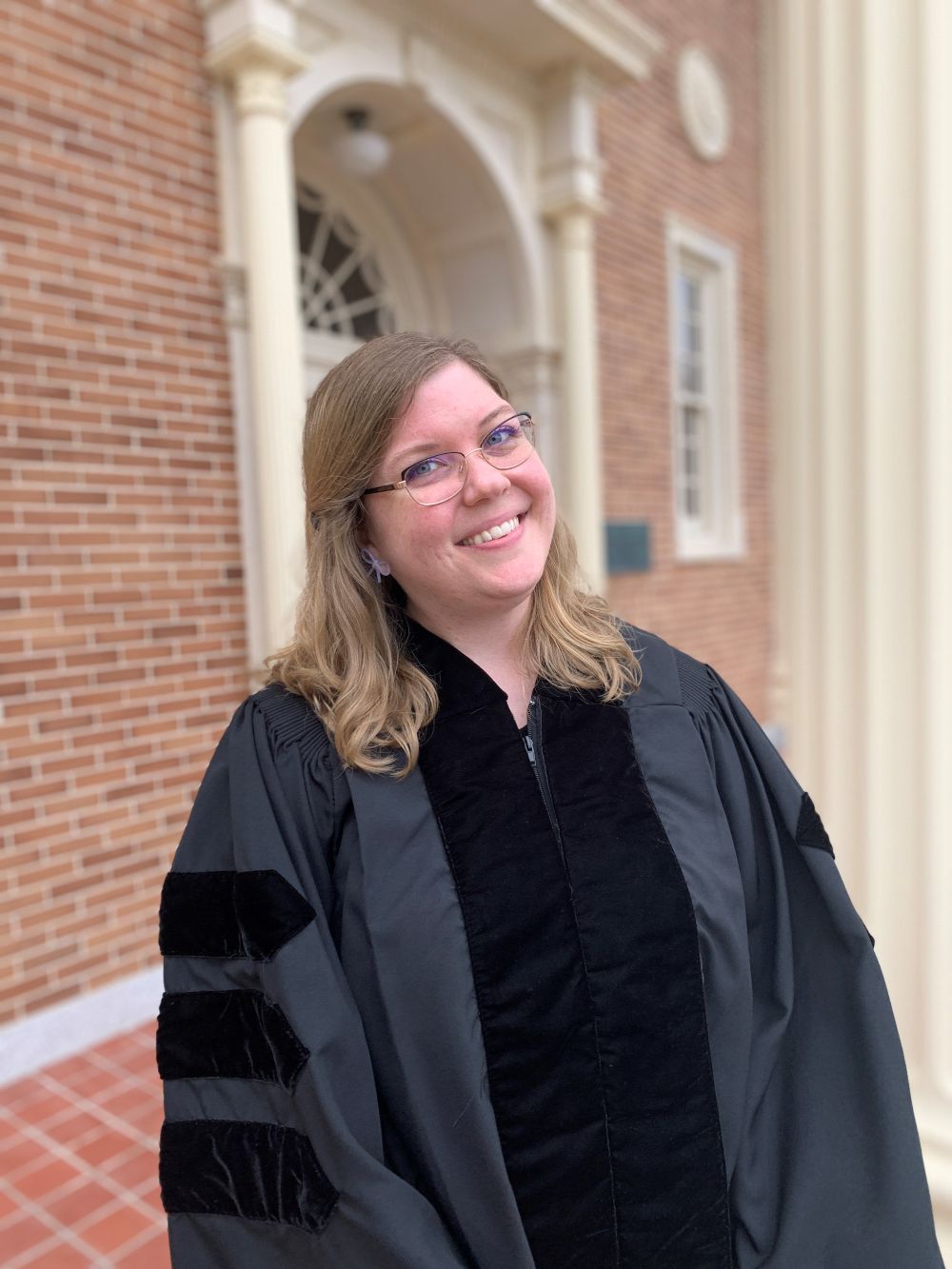 Hayden McDaniel came away from her graduate studies at The University of Southern Mississippi (USM) not only with a Ph.D., but also a cemented passion for public history research and deep appreciation for the work of local activists who fought for freedom during the American Civil Rights Movement.

McDaniel, a native of Dothan, Alabama, was awarded her doctorate Dec. 12 during a ceremony for graduate students, held at Reed Green Coliseum on the USM Hattiesburg campus. She is education curator at the Alabama Department of Archives and History, where one of its major programs is the Alabama History Institutes, an immersive professional development opportunity for teachers of grades K-12 to improve social studies education and civic engagement in the state.

Her dissertation, “From Carver to Carter: The Political Economy of Peanut Cultivation in the South, 1945-1976,” examines agricultural policy after World War II through the lens of the southern peanut industry. Her research focused on the five largest peanut producing states, including Virginia, North Carolina, Georgia, Alabama, and Texas.

McDaniel researched 11 different collections—at least one in each of these states. “I consider myself an agricultural and political historian, and I have always been interested in discovering the way things work.”

At USM, McDaniel expanded her knowledge base with her work in the University’s renowned Center for Oral History and Cultural Heritage (COHCH), the primary attraction for her in choosing the University for graduate studies in 2012, when she met former COHCH Director Dr. Louis Kyriakoudes.

That meeting led McDaniel toward a four-year stint with the COHCH, just one semester after she enrolled in the program, during which she served as project coordinator for a National Endowment for the Humanities (NEH) grant that funded the processing and  digitization of more than 400 oral history interviews with Civil Rights Veterans.

“That is probably the project I am proudest of from my time at USM,” she said. “In my role as Project Coordinator at the COHCH, I got to hear so many stories from veterans from across the state. This helped me to truly appreciate the local stories of Hattiesburg veterans. Being in Hattiesburg made the Civil Rights Movement real to me in a way I had never experienced, even being from Alabama.”

McDaniel participated in the 50th anniversary recreation of Freedom Day 1964, which was a march in Hattiesburg protesting voter suppression. ”At that event, I had the opportunity to introduce Dr. Anthony Harris, a professor, activist, and son of local civil rights activist Daisy Harris Wade.”

McDaniel also got the chance to meet renowned Student Non-Violent Coordinating Committee (SNCC) leader Bob Moses when he was in Hattiesburg and at USM attending meetings and events. She also interviewed Winston Fairley, activist and son of former Forrest County NAACP President J.C. Fairley, and Deidra Dunn-Pleasant, daughter of Dr. Felix Dunn, who worked with Dr. Gilbert Mason on the Biloxi beach wade-ins. Another notable Hattiesburg activist, Jeanette Smith, invited McDaniel into her home when she brought a friend for an interview.

When USM Assistant Professor of History Dr. Kevin Greene became director of the COHCH director, he also became a faculty mentor for McDaniel. “He (Dr. Greene) gave me practical application skills, along with so much feedback about how to be a better public scholar,” she said. “And working with and getting to know Stephanie DeArmey, Ross Walton, and Diane Ross (COHCH staff) was also very inspiring, and I learned so many things from each of them.”

McDaniel also praised USM School of Humanities Interim Director Dr. Matthew Casey for his assistance with her pursuit of funding and studies, and Associate Professor of History Dr. Max Grivno for serving as her advisor in the latter years of her program.

During her time at USM, McDaniel earned several external awards, including the Parker-Dooley Visiting Scholar Grant from the University of North Carolina-Chapel Hill, the Moody Research Grant from the Lyndon B. Johnson Presidential Library, and a Research in Congressional Collections Grant from the Association of Centers for the Study of Congress.

“Hayden was an impressive graduate student who became a seminal part of the Center for Oral History during the entirety of the 2014-16 NEH grant, and throughout her time at USM,” said Dr. Greene. “She possesses a steely resolve and calm determination found in only the best historians and academics. We’re so proud of her accomplishments, and will follow her career closely as she continues to soar.”

“She (Hayden) is enthusiastic about oral history, and always brings a great deal of insight and professionalism to whatever project she takes on,” Walton said.

Up until the very end of her time at USM, McDaniel was still a part of the history she played such a significant role in studying and preserving, as USM bestowed during its fall graduations a Doctor of Humane Letters to Mrs. Ellie Dahmer, the wife of local civil rights activist and martyr Vernon Dahmer, whose work Mrs. Dahmer continued following his passing.

“Being so close to history is nothing new in my experience at Southern Miss. I was honored to be this close to it again, with the conferral of Mrs. Dahmer’s doctorate,” McDaniel said. “It is such a well-deserved recognition.”