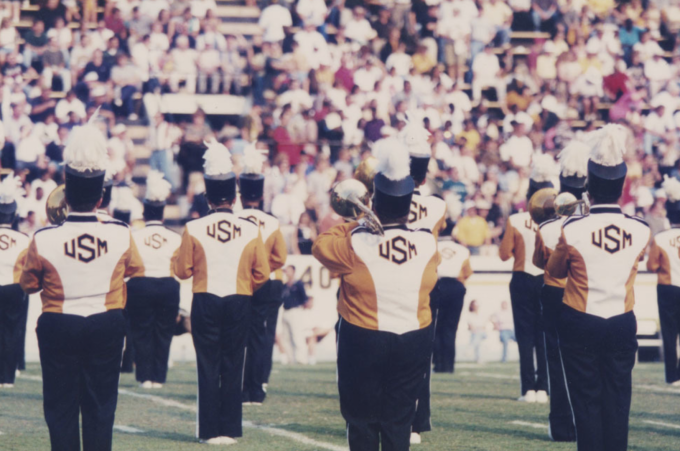 Pride of Mississippi playing during halftime; 1997; The University of Southern Mississippi Libraries.

A Tradition of Musical Excellence

Dr. Mannoni’s appointment as chair of the Department of Music, and later as dean of the College of the Arts, led to the tenure of only seven directors of the Band Program in 60 years: William J. Moody, Alan Drake, Raymond G. Young, Joe Barry Mullins, Ike Nail, Thomas V. Fraschillo and Catherine A. Rand. Therefore, the history and success of the School follows the same of the above individuals and their leadership. After the initial successes of the Marching Band, the concert ensembles began to develop to be what are known today as leaders in the profession nationwide. William J. Moody began with the Wind Ensemble’s first performance at the College Band Directors National Association Convention in Gainesville, Fla., in 1966.

Subsequently, the Wind Ensemble performed for another of these conventions during the tenure of Joe Barry Mullins. The surge of national and international notoriety, however, came with Thomas V. Fraschillo’s leading the Wind Ensemble to three national performances for the College Band Directors National Association and two for the American Bandmasters Association. These performances have brought numbers of graduate students to the School of Music for study and continue to be lauded by the profession at large.

Each of the Band Program’s concert ensembles has its place in the education of our music majors; however, the ensembles have also provided an outlet for students throughout the University during both the first and second semesters. Just as the Marching Band provides a service for football experiences, these other ensembles provide academic, recruitment and community services. The Wind Ensemble and the Symphonic Winds have performed for the Mississippi Bandmasters Association state convention five times. All of the groups have provided enhancement to community projects that include numerous appearances for various citywide events.

The University Band Program provides an international experience for its students in Europe and Australia. In Italy, a yearly program of study for selected students occurs in Rome with Maestro Fulvio Creux, Italy’s most important conductor of bands. Students are given the opportunity to perform with Italian professional musicians and interact with students who are studying in conservatories of music. In Australia, students have been the guests of Melbourne University and its brass department and have enjoyed study with internationally acclaimed brass performer Barry Tuckwell.

The Era of Dr. Fraschillo

As a Mississippi product, the Wind Ensemble has been featured on numerous radio broadcasts from Public Radio Mississippi and has been the only Mississippi group that can boast of having been aired nationally on Public Radio International’s “Performance Today.” CD’s are produced annually to feature the bands’ musicians and are provided to recruits and Mississippi band programs as a service.

Upon Dr. Fraschillo's retirement in 2012, Dr. Catherine Rand took the helm as director of bands and started a new chapter for Southern Miss Bands.

Finally, University Bands has brought two conventions to the State of Mississippi:

The College Bandmasters National Association and the American Bandmasters Association. These took place in Gulfport and brought conductors and students from throughout the United States to a state that is rarely seen or visited by any of these professionals.
College of Arts and Sciences