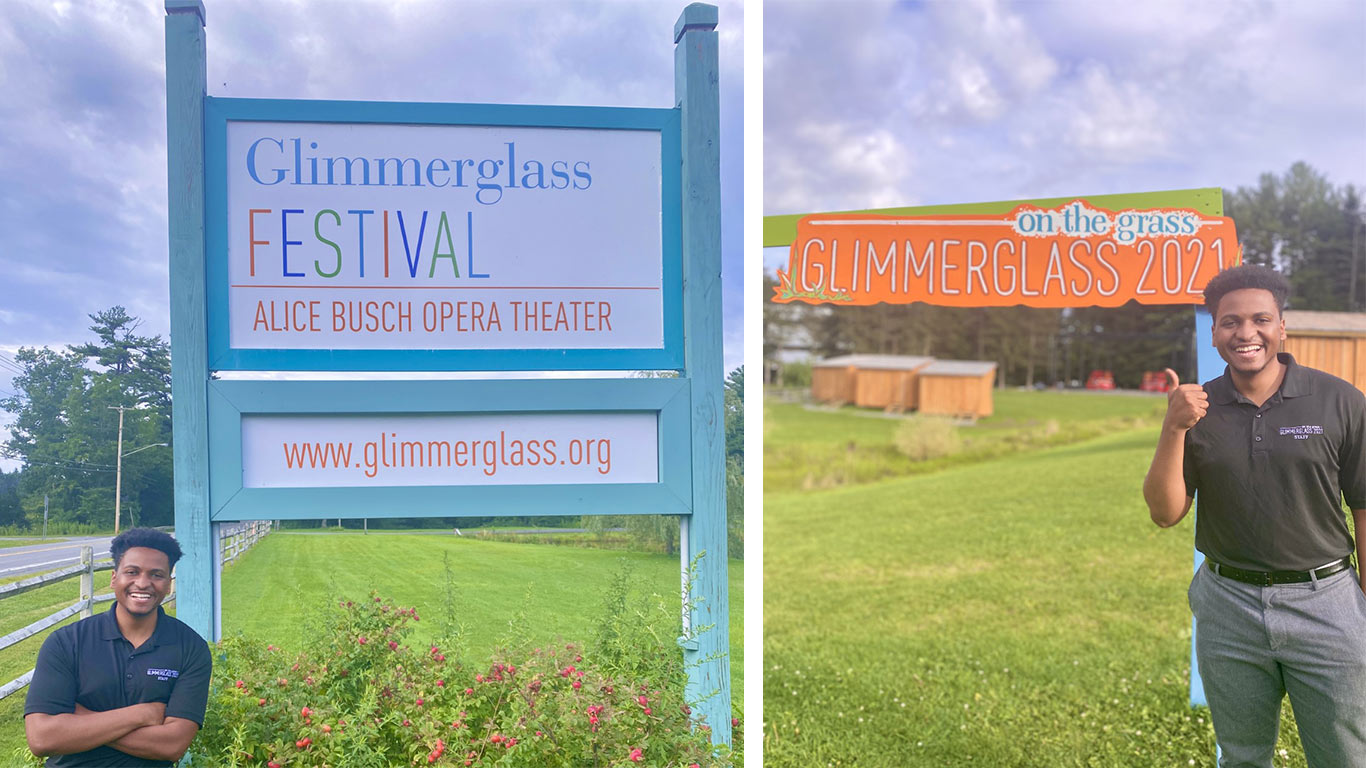 Justin Bell, a double-major in vocal performance and choral music education at USM, has proven himself exceptional—he has been handling a full college schedule while seeking opportunities beyond the classroom. He pens down his experience this summer, as he was selected to management of the Glimmerglass Festival.

This opportunity came about as an unexpected surprise: as a result of my work as producer of the cooking show “Cooking with Denyce,” which was created by opera star Denyce Graves and features some of the opera industry’s most known singers, directors, and artistic administrators. Francesca Zambello, the legendary opera director who leads the artistic visions of both Washington National Opera and The Glimmerglass Festival, in Cooperstown, New York, was a guest of Season 1 and graciously spoke with me of my varied interests as a young opera singer and arts administrator.

When I was invited by Francesca and the Director of Artistic Administration, Amra Catovic, to join the staff at The Glimmerglass Festival, my immediate response was “A thousand times yes!”

During this summer’s season, I worked directly with the Director of the Young Artists Program, Allen Perriello, and the Director of Artistic Administration as Artistic Associate. We launched an unprecedented season titled, “Glimmerglass on the Grass,” which mounted six operatic productions on an outdoor stage for audiences to accommodate COVID-19 precautions.

Audiences came to hear live music for the first time in over a year, whether it was rain or shine, and I was so honored to see my colleagues perform a season that included The Magic Flute, Songbird (a New Orleans-style adaptation of Offenbach’s La Périchole), Il trovatore, The Passion of Mary Cardwell Dawson, and concerts of both musical theatre and famous operas by Richard Wagner.

The rewarding aspects of my experience this summer were endless.

As a young opera singer, I benefited so much from working alongside my fellow young artists, most of whom have completed their graduate studies and have transitioned into professional work, and the seasoned guest artists. Resident artists William Burden, Eric Owens, and Isabel Leonard were beyond gracious in their performances, mentorship, and coaching, instilling years of international careers.

As an arts administrator, I was so impressed by the work of my colleagues in the Artistic department as they handled each challenge this season with dedication, grace, and patience.

What I learned, as a singer on the other side of the table for a change, was that the inner workings of running an opera company are extremely complex. Everything from contracts to the rehearsal process and artists’ health fell in my wheelhouse when it came to preparing the season, and adaptability was key when the shows opened for audiences.

As a human being, my heart was full to see so many individuals, who love our art as much as I do and who maneuvered a 6-day work week for ten weeks, giving nothing but excellence and heart to making the Festival a success.

I left New York on fire about my gifts and passions like never before, and I am grateful for such an enormous opportunity. #SMTTT