Alcohol and Other Drugs

If you or someone you know is struggling with alcohol or drug abuse, know that you have resources on campus. Our clinic offers programs like Eagle Check-Up for students who may need help or have questions related to alcohol and/or drug abuse. The Resources for Improving Student Well-being is a great tool to help, too!

Also, be aware of the Alcohol Policy we have here at Southern Miss and make responsible choices. 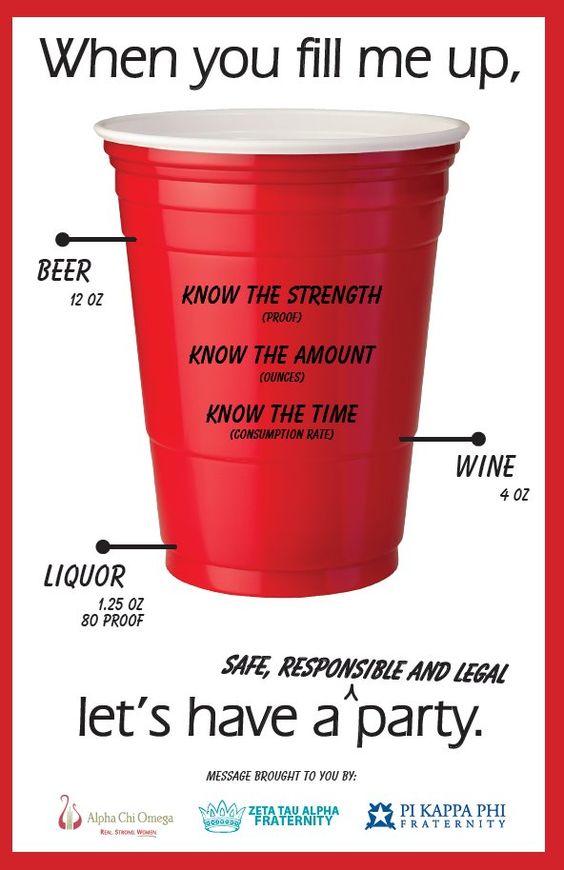 Your body can eliminate about ONE alcoholic drink per hour.

What is a Standard Drink?

Blood Alcohol Content (BAC) - the measure of the amount of alcohol in a person's blood.

Rate of Consumption - How fast are you drinking? Gulping and chugging can lead to intoxication sooner than those who sip or drink slower.

Strength of Drink - Know how much alcohol is in your drink, especially if drinking a mixed drink. Carbonated beverages speed up the absorption rate of alcohol by your body. Energy drinks (a stimulant) can mask the effects of alcohol (a depressant) and should never be mixed with alcohol.

Alcohol and Energy Drinks - Energy drinks consumed with alcohol heightens the buzz and the crash that typically occurs with alcohol consumption. This can lead to alcohol poisoning, alcohol related accidents, and even death.

Drug Use - Mixing alcohol with other drugs, even over-the-counter medications, can be dangerous.

Food Intake - Eat before and while you're drinking. This will help your body absorb the alcohol and slow down how quickly you become intoxicated.

Before you take your first sip, keep the following in mind:

Learn more with Alcohol Use and Your Health and make the decision to act responsibly.

Binge Drinking is defined as:

Binge drinking is most common among younger adults aged 18-34 years, but is reported across lifespan. The prevalence of binge drinking among men is twice that among women.

No matter the setting, always be aware and know the signs of alcohol poisoning.

Other signs to be aware of: mental confusion, a strong odor of alcohol

The legal drinking age is 21.

Penalties for underage drinking include: Legal consequences for drinking and driving include:

Misdemeanor charges may be filed against anyone who owns or leases a private residence or private premises and knowingly allows a party to take place or continue at the residence or premises where a minor attending the party obtains, possesses, or consumes beer, light wine, or alcoholic beverages.

Violation of the Social Host Law is a misdemeanor and punishable by a $1,000 fine and/or 90 days in jail. This law is not limited to underage drinking that takes place in a home, but also applies to gatherings such as bon fires or on private properties like camps and/or lake houses.

Mouth and Esophagus: Alcohol is an irritant to the delicate linings of the throat and esophagus. It burns as it goes down.

How fast the alcohol is absorbed depends on several things:

After absorption, the alcohol enters the bloodstream and dissolves in the water of the blood. The blood carries the alcohol throughout the body. The alcohol from the blood then enters and dissolves in the water inside each tissue of the body (except fat tissue, as alcohol cannot dissolve in fat). Once inside the tissues, alcohol exerts its effects on the body. The observed effects depend directly on the blood alcohol concentration (BAC) which is related to the amount of alcohol consumed. The BAC can rise significantly within 20 minutes after having a drink.

Bloodstream: 95% of alcohol taken into the body is absorbed into the bloodstream. Alcohol causes the red blood cells to clump together in sticky wads, slowing circulation and depriving tissues of oxygen. Alcohol slows the ability of white cells to engulf and destroy bacteria and degenerates the clotting ability of blood platelets.

Once absorbed by the bloodstream, the alcohol leaves the body in three ways:

As a rule of thumb, an average person can eliminate .5 oz. of alcohol per hour. So it would take approximately one hour to eliminate the alcohol from a 12 oz. can of beer.

The BAC increases when the body absorbs alcohol faster than it can eliminate it. So, because the body can only eliminate about one dose of alcohol per hour, drinking several drinks in an hour will increase your BAC much more.

Pain relievers with an origin similar to that of heroin. Opioids can cause euphoria and are often used nonmedically, leading to overdose deaths.

Medications that slow brain activity, which makes them useful for treating anxiety and sleep problems.

Addiction is a brain disease. People from all backgrounds can get an addiction. Though an addiction can start at any age, chances of addiction are higher when a person starts using drugs when they're young..

Adapted from What is an Addiction?

Acquired from Signs and Symptoms of Drug Abuse.